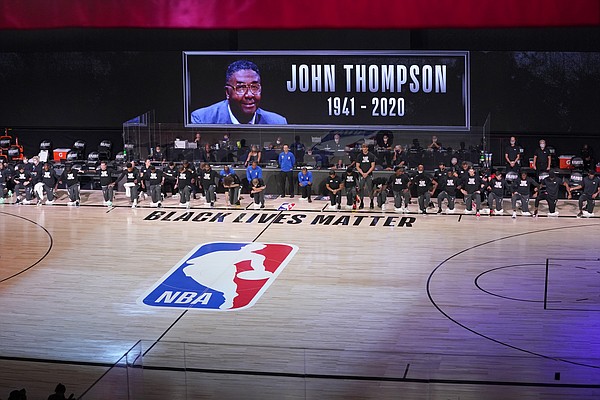 Members of the Miami Heat and the Milwaukee Bucks observe a moment of silence honoring the late John Thompson during the first half of an NBA basketball conference semifinal playoff game, Monday, Aug. 31, 2020, in Lake Buena Vista, Fla. (AP Photo/Mark J. Terrill) by Matt Tait

The death of former Georgetown basketball coach John Thompson drew reaction from all corners of the college basketball world, including right here in Lawrence, Kansas.

In a Twitter post late Monday evening, Kansas basketball coach Bill Self paid his respects to Thompson, who won a national championship with the Hoyas in 1984 and was a part of two world championship teams during his playing days with the Boston Celtics.

“Of all the shadows that have been cast on the sport in my lifetime, no one’s is bigger than John Thompson,” Self’s message read. “He was respected and an integral pillar in growing our game, and he will be truly missed.”

The connections between Thompson and Kansas basketball do not stop with Self.

Former KU great Danny Manning, who played for Thompson on the 1988 United States Olympic team, also shared his condolences on Twitter on Monday.

“It’s sad to say goodbye to an icon and legend like John Thompson,” Manning wrote. “He was like a father figure to many, a pioneer/trailblazer/teacher who created opportunities and life lessons for so many. Playing for him on the 1988 Olympic Team, I was blessed to receive some of his nuggets of life.”

Both Self and Manning also paid tribute to another college basketball coaching giant who passed away last week — Arizona’s Lute Olson.

“Lute Olson, a great coach and gentleman,” Manning tweeted. “I was able to play and win a gold medal for coach during the 1984 Jones Cup and spent time with him on the annual Nike basketball trips. My thoughts and prayers are with his family, friends and former players. RIP coach.”

Added Self: “Just within the past few days our sport has lost two legendary coaches in John Thompson and Lute Olson and we are forever grateful for the lessons they taught us in life and basketball.”

Thompson faced the Jayhawks just one time in his career, knocking off Manning and company in the Sweet 16 of the 1987 NCAA Tournament in Louisville.

The Hoyas were the top seed in the southeast region that season, and they knocked off the fifth-seeded Jayhawks, 70-57.

Olson and the Jayhawks have a little deeper connection, with the former Arizona coach having faced the Jayhawks seven times during his U of A career, with KU holding a 4-3 edge in those matchups.

For your viewing pleasure, here’s a look back at two of the more memorable KU games involving these two coaches.

I'm totally surprised that Manning would have anything good to say about Thompson, who benched Manning toward the end of the game, essentially costing the USA the title in 1988.

No one mentioned either that Thompson was one of the most racially biased coaches in basketball, hardly ever having any white kids on the Hoya teams.