Editor's Note: One week after this blog was posted, Silvio De Sousa announced that he was leaving the program, citing personal issues that needed his attention as the reason for his decision to say goodbye to KU. 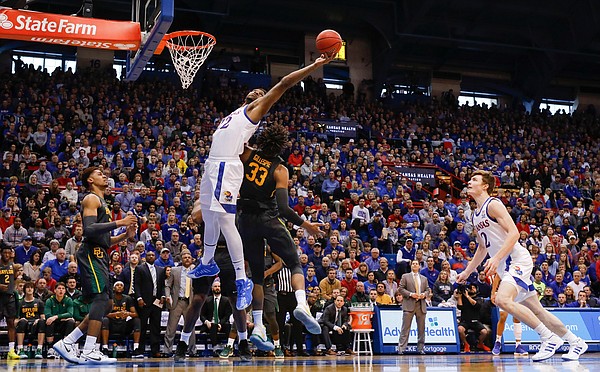 Well, believe it or not, it’s time for the last go around for Kansas forward Silvio De Sousa.

But either way, De Sousa has yet to deliver that one full season that Kansas fans have been waiting for since he arrived early in time for the second semester of the 2017-18 season and helped the Jayhawks reach the Final Four.

We all know what happened between then and now and why it hasn’t exactly worked out for De Sousa. But maybe there’s still time.

I’ll be honest. After the K-State incident last season, I thought De Sousa was done at KU. But he paid his penalty, hung in there with his teammates and, more importantly, proved to KU coach Bill Self that this was where he wanted to be and that it would be worth it to keep him around.

Now is when we get to find out. So let’s have a look.

He will: Finally play with a free mind and settle into a regular role

I’ve liked De Sousa from the first time I talked to him, both on the phone over What’s App in an airport in France when he committed to KU, and, in person, when he did his first on-campus interview with the local media.

He’s friendly, engaging, personable and genuine and he never mails in his answers.

Obviously he’s had a lot to answer for during his time in Lawrence — some his doing, some not — and all of that, pushed up against the expectations of his recruiting status, made it hard for De Sousa to get comfortable and relax.

But I think that’s exactly what we’ll see this season.

Call it senior urgency setting in. After all, this is De Sousa’s last shot at playing a real role for the Jayhawks.

Or call it maturity taking center stage. Whatever the case, De Sousa was in Lawrence throughout the pandemic and got to spend a lot of alone time working on his game and searching his soul to find out what he wants his final season at Kansas to look like.

By nature, De Sousa is a people person. He likes people and he wants people to like him.

Whether he puts up double-double type numbers and is a force to be reckoned with or simply fills a role and gives KU 10-15 valuable minutes off the bench, either way I think we’re on the verge of seeing the best of Silvio De Sousa.

And the guess here is the Jayhawks will benefit from getting it.

He won’t: Take a bunch of outside jumpers, despite what you’ve seen on social media

All of that down time these past several months allowed De Sousa to work on his game, and, based on the videos of a few of his workouts that surfaced on social media, De Sousa looks to be in great shape.

In addition, he appears to have developed a silky smooth jumper and also seems to have elevated his face-up game to the point where he could be a legitimate weapon in half-court sets.

While all of that is great for his personal development, none of it came in the heat of the moment against some of the best players in the country. And it’s not likely, given the depth KU has on the wing, that De Sousa will be asked to play the 3 and use those newfound skills.

Instead, he’ll be asked to do what he did in Year 1, screen, rebound, defend and get easy buckets around the rim. If he does that, he’ll have a chance to establish a clear role.

But if he starts pulling jumpers to show off his range for pro scouts, he might find himself on the bench more than he’d like.

Versatility and a better all-around game certainly won’t hurt De Sousa. But the Jayhawks still will need him to be what he is before anything else — a physical, athletic, high-energy forward who can make life hard on KU’s opponents in the paint.

He might: Deliver a few dunks that make you think of Thomas Robinson

De Sousa likely will not average a double-double or become the player that KU’s offense runs through this season.

But that does not mean he can’t impersonate the former KU All-American in other ways.

Whether finishing with authority in transition, getting on the glass for a vicious put-back or catching a lob over the top, De Sousa has the hops and the tenacity to try to hurt the rim the way T-Rob did back in his day.

Robinson was the author of a few of the greatest dunks Kansas basketball has seen this century, so saying De Sousa can get there a time or two is no small nod.

He can. He showed it in those social media videos. And if he plays with a free mind and taps into his instincts rather than thinking so much and worrying about messing up, the opportunities will be there for some jaw-dropping, wow moments from the KU senior this season.

Probably not, but this actually might not be his last go around. The NCAA could decide to give everyone an extra year due to Covid.

"The NCAA's announcement said seniors student-athletes who take advantage of the additional year of eligibility will not count against team scholarship limits in 2021-22." This applies to footbale but I don't think they've decided on basketball yet.

With 4 returning Seniors, DeSousa, Lightfoot, Teahan, and Garrett KU would have 17 players on scholarship.

Changing subjects, this makes me wonder if Miles will use this to our advantage in building the football team. Since the year doesn't count this gives KU the opportunity it needs to build much faster. Let's speculate we currently have 70 scholarship players that includes 15 seniors, If the 15 Seniors decide to return to play another yearand KU recruits 20 freshmen, KU would end up with 90 players on scholarship next year. KU could then redshirt 15 to 20 players.....Juniors, and Sophomores and then when the year is up, Because we would have a lot more reshirt players in 2022, KU could could easily be full up and might only be able to offer 15 scholarships. This could bring KU to the 85 max for years to come.

They're voting on it for winter sports athletes this coming week sometime so we'll know more soon. At the time I wrote this, though, nothing was official.

Also, Teahan is not on scholarship and those other three already are. So if they pass the proposal to give 2020-21 winter sports athletes an extra year and all 3 of those guy return, KU would, as of today, have 15 guys on scholarship next year — the 13 they have this season plus incoming commitments KJ Adams and Zach Clemence — with the potential to add one or two, as well.

Silvio looked awful at times last season - slow and uncomfortable. He didn’t add much value to the team. I hope that improves his game and has a decent senior season.

In some ways Silvio & Mitch are in the same boat, though their games are very different. Both will likely be a backup to David at the 5, which gives limited minutes to split. The real question for minutes is can they defend the smaller faster 4’s or even switches on the perimeter. It was a key last year with Dok, and a limiting factor when Withey was alongside Robinson. The rest is incidental. Definitely cheering for Silvio to have a big year and springboard to the future.

Any chance Silvio redshirts this year (similar to Mitch last year) to have more opportunity next year? Assumes David and Mitch move on.

There is no reason for him to redshirt as the NCAA will likely not count this year towards eligibility, essentially giving him back the year he lost and allowing him to return, if he wants to and Self will have him back (which would likely depend on a combination of attitude, skill, and what the other bigs and recruited bigs do). If we're short on bigs next year, no harm in bringing him back.