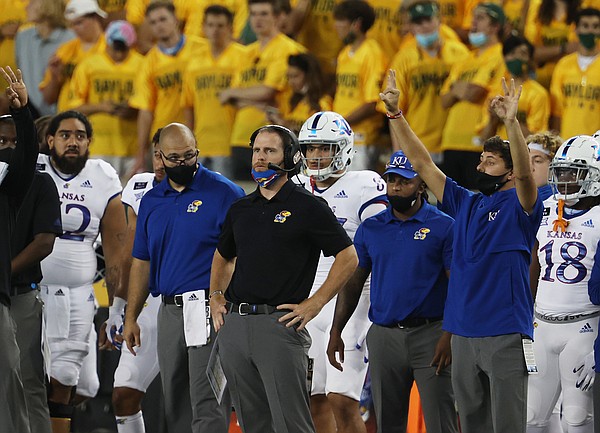 Despite the fact that Kansas football coach Les Miles announced Thursday that he has tested positive for COVID-19, the plan, at least as of today, is for him to coach the 0-3 Jayhawks in their next game at West Virginia on Sept. 17.

However, considering that we know about as much about COVID-19 as we do the current KU quarterback situation, you have to at least consider that Miles might not be able to make that trip after the Jayhawks’ bye week this weekend.

His condition could worsen. He could still be positive when the Jayhawks take their tests on the Friday before the WVU game (Oct. 16), therein making him unable to get on the plane to leave Kansas. Other roadblocks to a return could surface, as well.

So who would take the reins as KU’s interim head coach if Miles were to miss it?

Those two, along with first-year tight ends coach and recruiting coordinator Joshua Eargle, are the only members of Miles’ staff with head coaching experience.

Dearmon’s came at his alma mater, Bethel College, and, before that, at B.C. Rain High in Alabama. And Jones was a head coach in the wild world of Texas high school football before joining the college ranks.

Coordinators typically get the first look when programs go searching for an interim coach because they’re already sort of serving as the head coach for one half of the team. But current KU defensive coordinator, D.J. Eliot, despite his 20 years of experience in major college football, has never held the position of head coach at any level, and it’s probably best to let him continue to focus his efforts on getting the KU D up to speed.

In addition to having called the shots at the top before, Dearmon and Jones carry with them the personalities required to lead a team in an emergency situation.

The fact that the two work together to map out KU’s offensive game plans each week would make it even easier to bump one of them up for as long as Miles is sidelined. One could fulfill the head coaching duties, from practices and procedures to meetings and strategies, and the other could remain locked in on his regular role on offense, carrying a little more weight than normal to get through it.

Both would continue to communicate with each other throughout the week, and neither would get much sleep.

If Miles has to miss KU’s next game, one assistant technically would be put in charge. But the reality here is that everyone on the coaching staff would have to step up to handle his absence.

If Dearmon or Jones is running things at the top, both would need additional help from Eargle, offensive line coach Luke Meadows and running backs coach Jonathan Wallace to ensure that things continue to get done in the offensive meeting rooms, during film sessions and on the practice field. Because that’s where the work will really need to get done.

While it might be one heck of an adrenaline rush on Saturday afternoon in Morgantown to have the headset and call the shots, running things in Miles’ absence on game day would probably be the easiest part of filling in.

So which is the better option between the two, Dearmon or Jones? It probably does not matter much, but I would think the answer would be tied to whether or not KU believes one of them could one day be Miles’ successor.

Last season, when the KU offense experienced a major jump in production after Dearmon took over as OC, the talk among the KU fan base was that Dearmon was well on his way to becoming KU’s head coach in waiting.

I haven’t heard anything concrete on that from the KU administration, but if that’s even in the backs of their minds, why not see how Dearmon handles a week as the head honcho?

It might not reveal much. But it could show you a lot.

As for Jones, KU stepped up in the offseason to make sure he stayed in Lawrence, upping his pay and giving him a new title.

In addition to his reputation as KU’s top recruiter, Jones is a master motivator and seems to be universally liked. Those traits can only help you in an interim head coaching position. Just think back to how much the players stepped up while playing for Clint Bowen in 2014.

Because KU Athletic Director Jeff Long said in a statement on Thursday that the plan is for Miles to be back in action by Oct. 17, all of this could wind up being useless information.

There’s one problem, though. Long said in the statement that as long as Miles did not “develop symptoms or have a fever,” they anticipated having him for the WVU game. However, on Wednesday night, during his “Hawk Talk” radio show, Miles said on the air that he had a cold. That might not equate to developing symptoms, but it definitely could.

Either way, given the fact that KU’s next game is just nine days away, it doesn’t hurt anything to start preparing for the very real possibility that Miles might not be there.

Give Pooka the ball 30 times.

Snap the ball late in the clock.

It’s really not that hard.

And there's Dearmon in the picture...maskless. It doesn't do anything when you wear it on your chin.

Believe in masks or don't but KU protocol states you wear one while performing your duties and there's one of our leaders thumbing his nose at the rules.

You want some cheese with your whine?? Get a life and stop living in fear because the media tells you to. If you have underlying health issues stay at home and worry about your life, otherwise stop telling people what to do with theirs.

Take your own advice.

Take my own advice and live my life?? I am, without a mask and it feels amazing!

2 of the other 3 in the picture are halfway there. It’s also not terribly different than any other coach shown on tv that periodically pulls their mask down during a game.

It’s really a bit of a ruse given the testing and all the maskless players surrounding them, but good of them to dutifully toe the line drawn in the sand. Obviously good science.

Matt - If Miles is unable to coach, does that allow the team to have one of the non-coaching staff coach?

IIRC - A recent article showed that Coach Bowen’s D was making steady progress during at least the last 4 years of his time here and was outperforming the latest versions. But that’s just objective #’s and much less reliable than emotion.