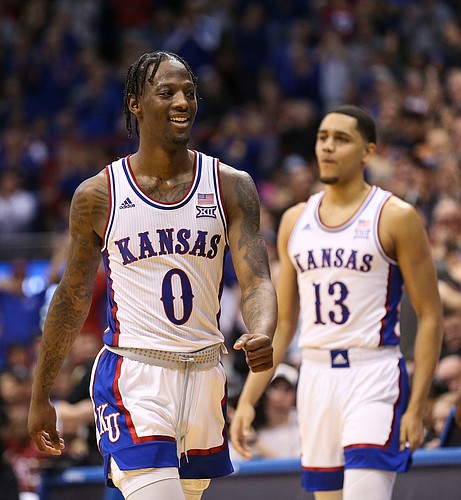 Kansas guard Marcus Garrett (0) smiles after a big dunk from Kansas center Udoka Azubuike (35) during the second half on Saturday, Feb. 15, 2020 at Allen Fieldhouse. by Nick Krug

Sometime next week, NCAA officials are expected to vote on allowing men's basketball players an extra year of eligibility because of the COVID-19 pandemic — a move that could make an impact on Kansas' roster.

The NCAA passed a similar proposal for all fall sports athletes earlier this year. And while extra eligibility for winter athletes could affect a whole bunch of Jayhawks, the player who first came to mind when I heard about this proposal was senior guard Marcus Garrett.

Garrett has been sensational throughout his KU career and has gotten better every season, taking on more responsibilities year after year.

This year will be no different, as Garrett is expected to be the Jayhawks’ primary point guard and a contender for a host of Big 12 and national honors.

It’s a big year for Garrett, who has NBA aspirations. And I’ve talked to enough people in college basketball who believe he has a shot to not only make it in the NBA but also to get drafted.

He’ll likely need a solid offensive season to get there, but his size, smarts, athleticism and stellar defense are already NBA-ready.

How Garrett would feel about using the free year for a second senior season is an open question. But if he’s into it, he essentially would have two more full seasons under KU coach Bill Self to fine-tune his skills on offense. That could be extremely beneficial, and if he spent both years as KU’s primary point guard, it could even shift the position at which Garrett projects at the professional level.

The one knock on the idea of staying an extra year would be his age. Garrett will be 22 in November and therefore would be 23 by the time the 2022 NBA Draft rolls around. By NBA rookie standards, that’s a little long in the tooth. Of course, so is 22, so it’s not as if that’s a huge difference.

Garrett’s smart enough and surrounded by enough of a solid support system — both at KU and back in Dallas — to weigh the pros and cons and decide what's right for him. But while he'd face a big decision on whether to stay or go, KU's decision on whether to welcome him back for a fifth year would be a no-brainer.

Obviously, the rule hasn't been passed yet, and there will still be a lot of things for college sports officials to work out if it does pass — including the roster limit for the 2021-22 season and what to do about scholarships. But it certainly would keep KU’s coaching staff from feeling like it has to load up in the 2021 recruiting class, which currently includes four-star forwards K.J. Adams and Zach Clemence.

Here’s a quick look at my initial thoughts about what another year could mean for the rest of the current KU roster.

Mitch Lightfoot – Yet another year of Mitch Mania in Lawrence? I’m not sure who would sign up faster for that, Lightfoot or Kansas fans.

Silvio De Sousa – Derailed by suspensions, De Sousa’s KU career has been nothing like the one people envisioned when he contributed right away as an early-arriving freshman on KU’s 2018 Final Four team. So it would make sense for him to be excited about the prospect of another season. It essentially would give him his lost 2018-19 season back and also would provide him the platform to prove that he still has a pro future.

Ochai Agbaji – Remember when Agbaji was projected as a lottery pick after breaking onto the scene as a true freshman midway through the 2018-19 season? Who would have thought then that the talented and charismatic guard from Kansas City, Mo., could be around for five seasons? It’s hard to make a prediction about what Agbaji would do because he still possesses all of the tools to make the jump at any time. How Agbaji performs during the upcoming season could provide the answer.

David McCormack – McCormack is my early guess for one of the players on the roster who might not be interested in taking advantage of the extra year. The junior power forward took a long look at his options after his sophomore season, and if he has a big season in 2020-21, he might prefer to move on from college hoops.

Christian Braun – He’s already on his way to becoming one of the most feared players in the Big 12, and the idea of him being around for five years instead of four would likely make some stomachs turn in Oklahoma, Texas, Iowa and West Virginia.

Jalen Wilson – Wilson’s goals are big, and I’m not sure he ever pictured himself staying in college for four years. The ankle injury during his freshman season already bought him one year, and I’m not sure there are five more in this talented wing’s future. I could see his career resembling Wayne Selden's, but even that would have him leaving KU after the next three seasons, leaving two on the table.

Tristan Enaruna – So much of last season was about getting comfortable for Enaruna, who had a couple of big moments but also appeared a bit too passive at times. Even with that adjustment period, many NBA scouts who watched the Jayhawks last season had Enaruna at or near the top of their lists of players they came to watch. Based on that, it’s hard to imagine the ultra-talented wing being in Lawrence for a full five seasons.

Dajuan Harris – From the moment he committed, I figured Harris would play a ton of point guard for Kansas during the next four years and be a cornerstone of the KU offense. Now, if he's allowed to take advantage of a fifth season, I’m starting to look at Harris as a player who could threaten Aaron Miles’ school record for career assists (954) and Darnell Valentine's school record for career steals (336).

Tyon Grant-Foster – Now here’s a guy who could really catch a break with the offer of an extra year of college eligibility. Self has said on more than one occasion that Grant-Foster is a future pro. If the junior college transfer has an extra season in college at his disposal, it could take some of the pressure off and eliminate the feeling of needing to get off to a fast start. Or, perhaps more importantly, it could help keep him calm if his transition to Division I takes more time than he would like.

Bryce Thompson – Two freshman seasons for a player who's already pretty smart? Sounds like a coach's dream. Despite Thompson's five-star status, few have viewed him as a one-and-done player. But almost everyone has expected him to leave before exhausting his eligibility, so the extra year seems like it would just be insurance for the talented freshman.

Gethro Muscadin – Raw when he arrived but improving by the day, Muscadin’s a tough one to figure out in this scenario. It’s not hard to envision him being an important four- or five-year player at Kansas. But it might be even easier to picture him leaving before his eligibility is up because of his size, length, athleticism and motor.

Latrell Jossell – Although he seems like a likely redshirt candidate in 2020-21, it’s not hard to picture Jossell having an important role as an upperclassman. Turning that stint into three seasons instead of just two merely increases the odds of him making an impact on the program before his career is over.

Matt-What does the plan look like for scholarship limits? Does a program like KU or UNC get to continue to sign up to a new number? If not, are there just fewer spots to go around and will we see scholarships pulled from guys at schools if they think the recruit coming in can help them more? Very different from football in my view where so many redshirt their first year anyway.

Haven't heard anything official on that yet, and I'm sure they'll discuss it next week and either clarify it or decide to explore it more so they can make a good decision, but my guess is they'll bump up the limit for the 2021-22 season, maybe to 15?, and then bring it back down to 13 moving forward.

That seems like a fair way to manage it so the programs can retain a few players for an extra year and also still add freshmen into the mix.

Having said that, I think that could be huge news for the mid-major and lower tier Power 5 type programs out there... They could be in line to land some talented players that they might not have otherwise been able to get in normal times.

Again, as long as it's all temporary, no one will be harmed by the extra year and a lot of players and programs will benefit.

It’s hard to imagine anyone with serious pro aspirations in BB taking advantage of an extra year.

If Garrett is the lead guard this year, it would still seem difficult for Harris to challenge the assist record. Miles had the ball from day one as the primary guard in a prolific O. Is 200 - 250 assists per year realistic?

I’m hoping Silvio is able to turn things around. I recall that he didn’t contribute right away but was crucial in the final run when Dok got hurt. Pretty normal freshman progress just late in the season vs non-conf. At some point, it would seem that he and Coach have the “it’s time to move along” talk. Maybe some has to do with how he’s progressing towards a degree.

Looks like it got edited, so I'm not sure if you're talking about the original version or the new version. I'll assume it's the original, though...

We've all seen those players who opposing team's fans love to hate. Duke's Christian Laettner and Bobby Hurley, maybe even Aaron Craft at Ohio State and countless players from Missouri in the past are all good examples.

I think Braun is/will become that player for fans of teams who compete against KU.

He's crazy tough, incredibly talented, very confident and plays with no fear and all-out intensity, which is great if you're on his side and maddening if you're playing or rooting against him.