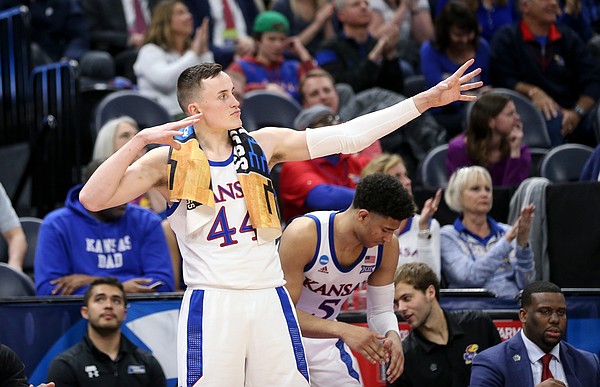 For the second installment of this season’s “He Will, He Won’t, He Might” feature here at KUsports.com, we’re ripping off the redshirt and taking a look at what’s ahead for senior forward Mitch Lightfoot.

The man that coaches say bleeds crimson and blue, Lightfoot sat out the 2019-20 season with the Jayhawks appearing to be overly loaded up front and the prospects for playing time lacking.

While it didn’t turn out exactly that way — Lightfoot probably would’ve played his typical role last season had he decided against redshirting — the move turned out to be a good one given the way the season ended.

Can you imagine having you career end on the best team in the country but unable to make a run at a national title because of a pandemic?

Sure that’s how it went for Udoka Azubuike and Isaiah Moss. But Dok, if he reaaaallllly wanted to, could’ve come back for another year. And Moss knew from the jump that he was only getting one year at KU.

And, yeah, Devon Dotson suffered, too, but his departure was his decision, which is much easier to stomach than a player simply running out of eligibility.

Lightfoot made the right call at the right time and now will get to reap the rewards of the year on the bench. Let’s take a look at what to expect.

He will: Be this team’s best shot blocker

This we know. While Udoka Azubuike improved a great deal as a rim protector last season, Lightfoot has been a legit shot blocker from Day 1.

And, other than taking a charge, blocking shots appears to be one of his favorite things to do on a basketball court.

Perhaps it’s the fact that many opponents like to challenge him that leads to his block parties. Or maybe it’s that they underestimate his ability, judging the book by its cover instead of reading all of the chapters.

Either way, Lightfoot has shown throughout his time at Kansas that he will challenge any and every shot he can get to, whether taken by the man he’s guarding or by someone else.

His ability as an off-the-ball defender has led to a lot of his blocks throughout the years, and Lightfoot seems to enjoy them all equally.

After blocking just 11 shots in limited time as a true freshman, Lightfoot tripled that during his sophomore season and then added 21 more to reach his career best of 54 blocks in a season during the 2017-18 team’s run to the Final Four.

Opportunity played a huge role in that, with Lightfoot logging a lot of minutes inside both as a backup to and fill-in for Azubuike.

The guess here is that his personal goal in 2020-21 will be to break his own mark, but that all of his goals for the team will far outweigh any individual achievements he may or may not get.

Lightfoot will be a big part of the 2020-21 Jayhawks, even if it doesn’t come through him playing big minutes.

Kansas is simply too loaded in the backcourt and on the wings to devote too many minutes to true big men. But because Lightfoot, David McCormack and Silvio De Sousa all play slightly different styles, there should be plenty of room for the three of them to co-exist.

In fact, the plan to play all three likely will go better than last season, when KU coach Bill Self tried to find a way to play McCormack, De Sousa and Azubuike together early on but ultimately shifted to another season of heavy-guard lineups.

Assuming that KU will play with two bigs on the floor for at least part of most of its games next season (call it 10 minutes), that leaves 50 minutes to be divided up between KU’s top three big men.

McCormack, who enters this season averaging 12.5 minutes per game during his first two seasons, will get the first crack at getting the most of those. Even though McCormack has only played more than 21 minutes five times in his KU career, it seems like a safe bet that he’ll average between 20-25 minutes per game this year.

If he does, that still leaves plenty of PT for Lightfoot and De Sousa to split and have a significant role — based on matchups, hot hand, etc. — but would probably not allow Lightfoot to top 15 minutes per game on a regular basis.

There will be games where Lightfoot’s presence is crucial and he will log a handful of 20-minute nights. But the guess here is that he’ll still average fewer than 14 minutes per game for the season, although not by much.

… He might: Be in the starting lineup more than you think

I’m not predicting that Lightfoot is going to be a full-time starter for the Jayhawks this season. I’m merely saying there’s a chance the fifth-year senior could start a handful of games.

Self has talked plenty about Lightfoot’s improvement on the offensive end, and his ability to both stretch the floor as a shooter and move on the perimeter makes him an option to play the 4 in a two-big starting lineup.

Putting him in there would not only give the Jayhawks’ some flexibility, but it would also keep an experienced rebounder and shot blocker in the lineup. Lightfoot has proven throughout his career that he’s not afraid to battle with bigger, taller, stronger opponents. And he’s done it with a swagger that has made him a fan favorite.

In a season where the Jayhawks could play 35 games with a deep run, setting the over/under of Lightfoot starts at 6 or 7 seems about right.

With all of the wings that the KU roster possesses, Self is going to want to get those faster, more explosive players on the floor as often as possible, both to help KU’s scoring punch and to create problems defensively, as well.

But Self trusts Lightfoot. And he likes him. The guy voluntarily sat out last year — as a senior — to get another crack at a bigger role in his final season and then was an absolutely model teammate while doing it.

He pushed his teammates, used his leadership and experience when he could and continued to try to bring energy from the bench while wearing street clothes.

Lightfoot starting a handful of games does not sound crazy to me and it also won’t do anything to hurt KU’s bottom line.

I think he will play around 15 minutes a game. Self loves defenders and rebounders and Lightfoot has the ability to hit the 3. I think he will log about 5-6 minutes/night at the 5 and 9-10 at the 4. Just a guess, If Silvio does not improve, those numbers could go up. McCormack should be a beast this year.

Based on what we are hearing about a "bonus year" for any athlete during the winter sports, my guess is Mitch could be a six year guy......three years, a red shirt year, his senior year and a bonus year.

Can someone help me here, please...is this scenario possible???

They haven't yet voted on how this is all going to work out. With that said, if it gets implemented like it's expected to be then yes, Mitch could have 3 Senior seasons (redshirt SR, bonus year, 6th/final year).

I like Mitch. He really shows a lot of hustle when he is on the floor, and like Matt said, he's not afraid to mix it up with much bigger guys. And when he does, he usually blocks their shots, because they under estimate him. Looking forward to the season to get started. This team could be as good and as exciting as last years team. RCJH

Coach Self and others commented that a key last year was Dok’s ability to defend smaller players. As much as Mitch might enjoy competing and succeeding against bigger players, it seems to me his success and that of the team will be a matter of whether he can successfully compete against smaller players. Guessing he’ll get some time at the 5 against bigger players, but the flexible minutes would seem to be at the 4 where he likely will face smaller players. Marcus has well documented that smarts can overcome athleticism. Mitch’s minutes would seem to hinge on the same.

Mitch has a special capability of anticipating where the apex of an opponent’s shot will be and then swatting it (Jeff Withey style).

In his limitied role in past seasons he didn't have to worry too much about fouls and didn't mind clobbering a few guys. This year he'll need to use the ability you spoke of to avoid foul troubles.