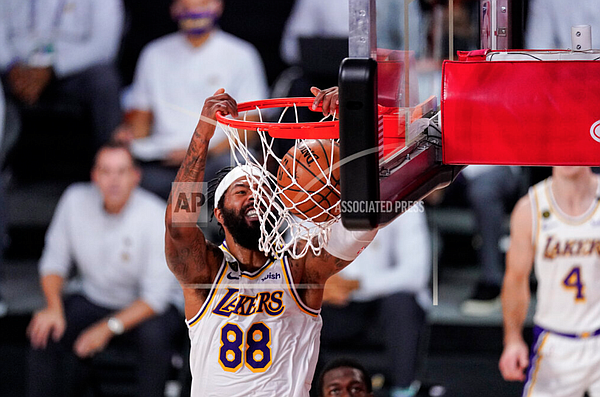 The Miami Heat cut the NBA Finals lead of the Los Angeles Lakers to 2 games to 1 with a 115-104 victory on Sunday night in Game 3.

But former Jayhawk Markieff Morris was not to blame for the Lakers failing to take control of the series.

In his best night in the NBA bubble, the 6-8 forward from Philadelphia delivered 19 points off the bench on 6-of-13 shooting, including 5-of-11 from 3-point range.

Morris’ 5-of-11 clip from behind the arc was a career best in the postseason, topping his previous high for 3-point makes in a game of four, which came twice in these playoffs during the Lakers’ 4-1 series victory over Houston.

Morris logged 25 minutes in Game 3 and also added 6 rebounds and 2 assists to his stat line, finishing as the second highest scoring Laker behind LeBron James.

His minutes on Sunday were up from his postseason average of 16 largely because of the foul trouble that Lakers’ star Anthony Davis found himself in early in the game.

Morris’ ability to move on the perimeter and space the floor appears to be working better against the Heat’s lineup, and his ability to get hot from 3-point range has proven huge in helping the Lakers keep up with Miami’s 3-point attack.

The Lakers and Heat will play pivotal Game 4 on Tuesday night, with Morris’ team looking to go up 3-1 and Miami looking to even the series at two wins apiece.

Markieff Morris in the 2020 NBA Finals

Don't give an S about the NBA. But I want to see Jayhawks playing at the highest level and also want to see them winning championships so Go Lakers!