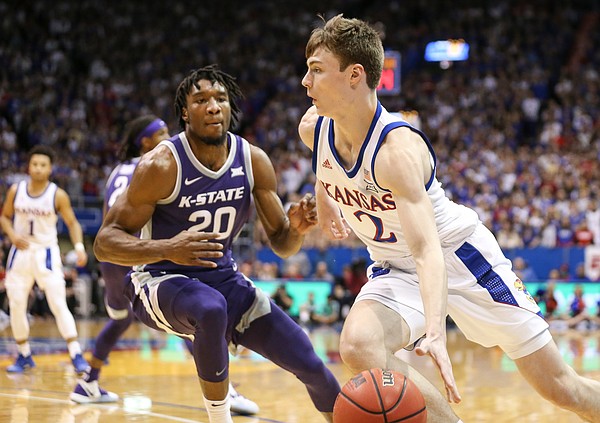 It’s easy to remember the big game Christian Braun had against Kansas State last season and to think of that as the highlight of his freshman year.

But to do that would be underselling the impact Braun made during his first season with the Jayhawks. Particularly during the Big 12 portion of KU’s schedule.

In 31 games while playing 18.3 minutes per outing and making five starts, Braun averaged 6 points and 3 rebounds per game while shooting 44.4% from 3-point range.

He became a key part of KU’s rotation and grew more confident with each outing and each fearless drive to the rim.

He also had no problem showing how comfortable he had become, developing an arrow-shooting routine after made 3-pointers that Kansas fans grew to love.

While that jump was important for both Braun’s adjustment to college ball and the team’s chances last season, an even bigger jump could be in store this season now that he knows what to expect and has had an offseason to tailor his game to what he learned last season.

Here’s a quick look at what to expect from the sophomore guard this season.

He will: Be the one KU player that every fan base in the Big 12 loves to hate

He’s got the game, he’s got the mentality and he even has the smirk that tends to get under people’s skin.

That alone could make Braun an easy target for heckling and disdain from opposing crowds, both in person and those watching on TV across the country.

But when you add to that the fact that he could be one of those players who frustrates opponents by outplaying them and producing big time numbers at the same time, you’re looking at a guy who could quickly become that guy in the Big 12 Conference.

It’s one thing for a bunch of five-star McDonald’s All-Americans to come to Kansas and beat up on the competition. But when a young player from Kansas who was mostly overlooked during his recruitment starts to do it, the cries from KU’s opponents tend to grow louder.

Braun, a former four-star prospect who picked KU over K-State, Illinois, Missouri and others, was ranked No. 93 in the Rivals 150 in the 2019 class, but his start at Kansas has him looking like a much bigger piece of the KU puzzle for the next few seasons.

And that is likely going to drive Big 12 fans nuts. Not quite in the same way that they grew tired of seeing Perry Ellis in a Kansas uniform, but I’m guessing they’ll replace the Old Man Ellis jokes with shots at Braun before it’s all said and done.

He won’t: Take as long to find his rhythm this season as he did during his freshman year

Like a lot of freshmen, Braun needed time to get acclimated to the college game last season. But once he was, he became a legitimate and valuable part of the Kansas rotation.

The former Blue Valley Northwest standout scored in double figures five times last season and four of the five came during the final 14 games of the season.

Not coincidentally, in those four games he also played at least 22 minutes, further illustrating how Braun’s role increased the more comfortable he got.

He finished the season with six consecutive 20-plus minute games and was poised for more in the postseason.

That same progression was consistent in other categories, as well — 3-point shooting and rebounding most notable among them — and now that Braun is past the new-kid-on-the-block stage of his college career, it will be interesting to see how his experience and wisdom open up his game even more than he’s already shown.

Last season, in limited minutes, Braun ranked fourth on the team with 32 3-point makes and also was the team leader by percentage among high-volume shooters.

So it will be interesting to see how that translates to Year 2, when he figures to play more minutes and have a more important role on the team.

Nowhere is that more true than behind the arc, where the Jayhawks will be looking to replace 87 3-point makes from Devon Dotson and Isaiah Moss a year ago.

There is no shortage of options for players who could take and make those shots this season. But Braun would only need 18 of them (21%) to push his total to 50 for the season.

That would still leave 69 to be spread out among Ochai Agbaji (46-of-136 last season), Jalen Wilson and newcomers Bryce Thompson and Tyon Grant-Foster.

Assuming Agbaji — Braun’s top challenger to lead the Jayhawks in 3-point shooting in 2020-21 — can up his total by four, that would give Kansas a pair of 50-make 3-point shooters (at least), something the Jayhawks had just twice from 2012-13 through 2015-16, when Self began to allow his teams more freedom beyond the arc.

Consistent 3-point shooting is still a bit of a question mark for the 2020-21 Jayhawks, and Braun’s ability to build on what he did a year ago will go a long way toward providing the Jayhawks with at least one of the answers they need to keep their long-distance attack where it needs to be.