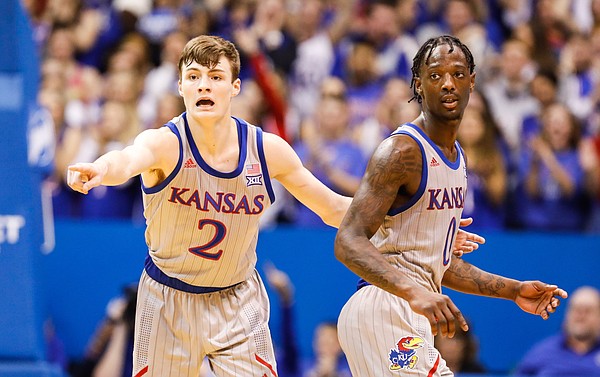 Kansas guard Christian Braun (2) and Kansas guard Marcus Garrett (0) get back on defense during the first half on Friday, Nov. 15, 2019 at Allen Fieldhouse. by Nick Krug

The identity of the fourth team headed to Florida over Thanksgiving surfaced on Wednesday morning, one day after news broke about a potential four-team event in Fort Myers, Fla., featuring Kansas, Auburn and Gonzaga.

According to CBS Sports college hoops analyst Matt Norlander, Saint Joseph’s, of the Atlantic 10 Conference, is the fourth team headed to Fort Myers. Sources told Norlander that Saint Joseph’s would play Auburn on Nov. 25 and Kansas on Nov. 27 at Suncoast Credit Union Arena, the home of Florida SouthWestern State College.

According to reports, KU and Gonzaga are slated to square off on Nov. 25, opening day of the 2020-21 college basketball season.

Nothing official has been announced from any of the four schools rumored to be involved in the event.

ESPN.com’s Jeff Borzello listed Kansas freshman Bryce Thompson at No. 27 in his recent Newcomer Impact Rankings for the 2020-21 season.

The 93-player list, which includes both freshmen and transfers also ranked KU junior Tyon Grant-Foster ranked at No. 69. Grant-Foster was the lone junior-college transfer on the list, and Borzello said the 6-foot-7 wing “will bring serious scoring punch to Lawrence.”

As for Thompson landing in the top 30, Borzello also lauded Thompson’s scoring ability saying, the 6-5 freshman “can fill it up in a hurry.”

Breaking: The Fort Myers Tip-Off field is set, sources tell CBS Sports. In addition to Kansas, Gonzaga and Auburn, the fourth team was decided this morning.