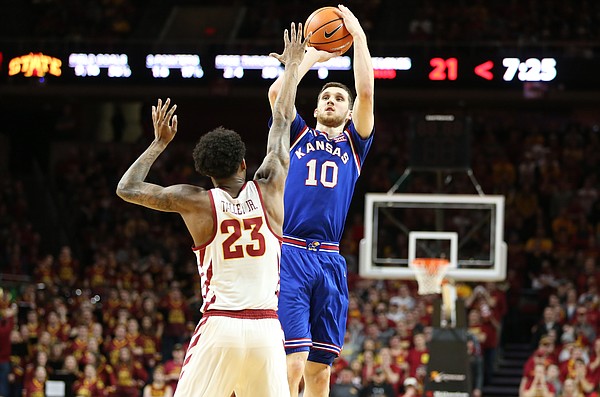 Kansas guard Sviatoslav Mykhailiuk (10) pulls up for a three in front of Iowa State forward Zoran Talley Jr. (23) during the first half, Tuesday, Feb. 13, 2018 at Hilton Coliseum in Ames, Iowa. by Nick Krug

In case you missed it a couple of weeks ago, former KU standout Svi Mykhailiuk, now with the Detroit Pistons, joined broadcaster Fran Fraschilla on his "World of Basketball" podcast to talk about the recently completed NBA season and a whole bunch of KU-related topics.

Included in the 50-minute interview were a couple dozen interesting topics from the four or five years of Mykhailiuk's life, many of them relating to his time at KU.

Here's a quick look at the highlights, along with the full episode for your listening pleasure.

• Missing out on playing in the NBA bubble

• The surreal nature of performing in the NBA

• How he became an NBA fan while growing up in Ukraine and how he made his way to Kansas, along with his first impression of Bill Self

• Svi on the older players he played with at Kansas, the KU crowd, his greatest memories from his days at KU, Devonte Graham and what his relationship with Bill Self is like now

• And what he’s looking to improve this offseason

Awesome. Thanks for bringing this to our attention, Matt!

"I would give everything to go back and play for four more years again." Love it.