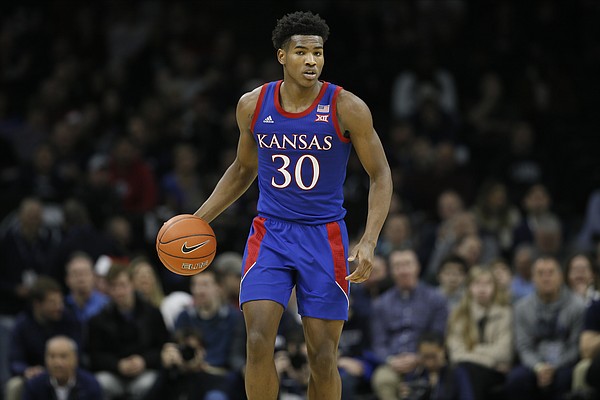 Two years into his Kansas basketball career, junior guard Ochai Agbaji appears to be ready to take on more responsibility than ever within the program.

In addition to suddenly being one of KU’s most experienced players, Agbaji also is one of the team’s most versatile scorers and reliable options on both ends of the floor.

Team-first all the way and fundamentally sound as often as possible, Agbaji likely won’t change his approach in 2020-21, but his impact could be bigger than ever.

A recent photo shared by the Kansas basketball team’s Twitter account showed the team after the completion of this year’s boot camp session on Tuesday morning. In it, Agbaji is one of five players with his shirt off and that vantage point — along with his pose — provides the opportunity to see exactly how much work the Kansas City, Mo., native put in on building his body in the offseason.

Compare the image to photos of Agbaji from last season and it’s easy to see the areas where he added significant amounts of muscle.

What that will do to his game — if anything — remains to be seen. But the guess here is that it will help him both in transition and on defense.

That’s a perfect segue into the next edition of He Will, He Won’t, He Might, so let’s take a look at what to expect from Agbaji during his junior season.

He will: Continue to be on the floor in crunch time and with the game on the line

This one is all about trust and KU coach Bill Self has had a ton of trust in Agbaji since midway through the second semester of his freshman season.

Part of it has to do with his approach to the game — follow the game plan, help your teammates, stick to the scouting report.

But the other part of it is Agbaji’s demeanor and personality. Like anyone, he’s had a few rough moments during his college career, but because he plays with such an even-keeled attitude, it’s often hard to pinpoint when Agbaji is rattled.

That’s the type of player you want on the floor at the end of games, and now that he’s an upperclassmen, with a couple of years of experience under his belt, it would not be a surprise to see Agbaji be even more aggressive in those late-game situations.

As long as he continues to make the right moves and plays within himself — there’s nothing from his past that suggests he won’t — that kind of cool, calm and collected confidence could become a real weapon for the 2020-21 Jayhawks at the end of close games.

He won’t: Struggle in transition the way he did at times during 2019-20

I don’t have concrete numbers on this — I haven’t found anywhere that keeps track of turnovers in transition — but it sure seemed like Agbaji was a little unsure of himself in transition last season.

Agbaji’s turnover rate (17.6 his freshman year and 19.4 last year) actually got worse during his sophomore season — a lot of that probably had to do with increased usage — and he ranked third on the team in turnovers, with 58.

On a couple of different occasions last season, Self expressed genuine surprise that a team full of so many talented athletes could struggle so much in transition.

Agbaji was certainly not the only one to blame for this, but I think his status as an underclassmen and genuine nice guy attitude was.

Rather than using his length, frame and explosive ability to be a nightmare on the break, Agbaji often looked to defer, seeking to keep everybody happy while falling in line with where he ranked in the pecking order of KU’s scorers.

The answer should have been No. 1 in transition. His ability to cover ground quickly and play above the rim should make him a monster on the run. And I think his new status as one of the team’s leaders in 2020-21 will unlock that part of his game this season.

He might: Earn a spot on the Big first-team all-defense squad

But he’s almost always in the right spot. He works extremely hard at guarding his man and might be even better as a team defender.

But because he’s more solid than spectacular, and because the best defender in the country is also on his team, Agbaji does not always get proper recognition for his defensive performances.

I think that could change this year.

See, it’s defense that kept Agbaji on the floor for more than 30 minutes per game during his first two seasons with the Jayhawks, even during those offensive slumps that popped up each season.

And it’s hard to imagine any of KU’s talented young guys being equipped to bring more knowledge, effort and, of course, experience to the defensive end of the floor at the end of games this season.

Beyond that, don’t be surprised if you see Agbaji take a turn or two at guarding the opponent’s best guard each game. That already has happened on a limited basis in the past, and it could be even more critical this year given the fact that Marcus Garrett will be the team’s point guard and will need to be as sharp on both ends of the floor as he has been on defense during the past three years.

In order to land on the Big 12’s all-defensive squad, Agbaji will have to produce numbers and be more than just a defensive presence that Bill Self trusts. But both his rebounds and steals went up last year from where they were during his freshman season, and there should be room — and opportunity — for them to go up again this season.

How about "He might be a more consistent shooter" or "He might improve his ball-handling so he can use all of that athleticism to be effective driving to the basket"? Those are the things that would take him from somewhere between "OK" and "good" on a given night to being great.

He might. There are obviously plenty of things you can pick for each of these with each player. I just lock into certain ones and run with them.

I actually think Agbaji's ball handling and shooting are better than he gets credit for. While he dropped his overall FG% a couple of points last year, he actually improved his 3-point shooting numbers, jumping up 3% on nearly twice as many attempts.

I have little doubt that he worked hard to improve both in the offseason and probably did just that. That's why neither was on my mind much when I wrote this one.

Statistically he was a better shooter. He's just so inconsistent. Some players are just this way so maybe that will never improve. This is why it's nice to be able to dribble well enough to be effective driving to the basket. Those shots are much easier to hit than 3's on those "off" nights.

The ball handling is more concerning to me. If he doesn't improve it, he'll have no shot at reaching those "pro" aspirations and he'll struggle to get his shot off if he's not a threat to drive around defenders as they close in on his position.

Shooting is easy to work on. I hope he had doing dribbling drills. His handles are suspect.