A month out from the 2020 NBA draft, Azubuike and Dotson remain unknowns 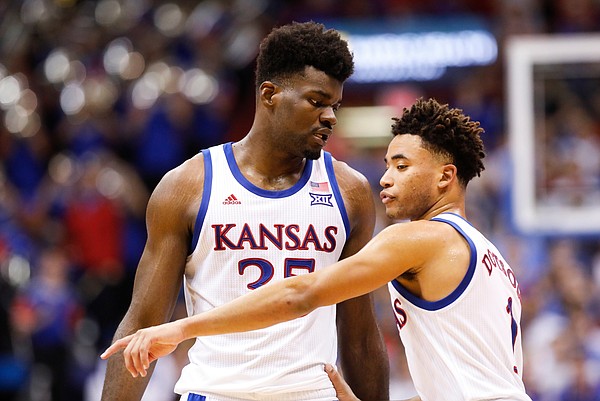 Between Oct. 16 and Nov. 16, draft prospects are allowed to go through a slightly altered pre-draft routine that includes virtual meetings with team officials and virtual workouts, as well.

During most years, those prospects by now would not only know which teams they were playing for but they also would be staring down the start of their rookie seasons.

This year, though, the COVID-19 pandemic has put things on hold and players like former Jayhawks Udoka Azubuike and Devon Dotson have had to wait longer to find out their fate.

For the better part of the past year, Azubuike and Dotson’s draft stock has hovered in the early portion of the second round, somewhere in the picks 31-40 range. And, according to the most recent mock draft by The Athletic’s Sam Vecenie, which was published on Tuesday, the two former Jayhawks remain in that range.

Vecenie, who provided a detailed look at all 30 projected picks in the first round, slotted Azubuike at No. 41 overall to San Antonio and Dotson to No. 43 overall to Sacramento.

Both could go higher, of course. And past mock drafts have predicted that. In fact, the most recent mock draft published by ESPN.com’s Jonathon Givony in late August had Azubuike at No. 30 (the last pick of the first round) and Dotson off the board at No. 35.

A Monday mock draft from Complex.com — its ninth version of the 2020 draft — had Dotson going to Toronto at No. 29 and did not list a second round.

Dozens, if not hundreds, of people throughout the world enjoy the art of publishing mock drafts, and some are definitely more accurate and reliable than others.

But at the end of the day, it’s all still a guess. Guys like Givony and Vecenie and ESPN’s Mike Schmitz have sources and contacts that help make their guesses much more precise, but even at that very few NBA GMs or front office types are willing to tell anyone on the outside their exact plan for the upcoming draft.

Besides, even if they did, they could change their minds based on the way the board falls or late information, so the information would still be vulnerable to change.

Regardless of who thinks what, Azubuike and Dotson, who have been working out feverishly since the end of the 2019-20 college hoops season, have one more month to make their case.

Whether they wow someone in an interview or put an impressive workout video in the right hands, they still have the chance to elevate their stock.

The best guess here is that the early second-round slot is the safest projection for both players, but I would not be shocked at all to see either one crack the first round. Both of them landing in the Top 30 would be a pretty big surprise, but it just takes one team, one coach, one general manager to fall in love with a player, regardless of what the hundreds of mock drafts say.

There are questions surrounding both players, from size and position to skill and ability. But both are competitive, both are coming off of the best years of their careers. And both carry that Kansas basketball pedigree with them, which has been known to carry weight with certain coaches and talent evaluators.

The recent explosion by Devonte’ Graham in Charlotte certainly has not hurt either player, and, if nothing else, the people making the decisions about who to pick and who to pass on know that, after a couple of years of playing for KU coach Bill Self, both Azubuike and Dotson can handle being pushed and have been coached hard.

At this point, it all comes down to teams figuring out where the two Jayhawks and 58 other players fit.