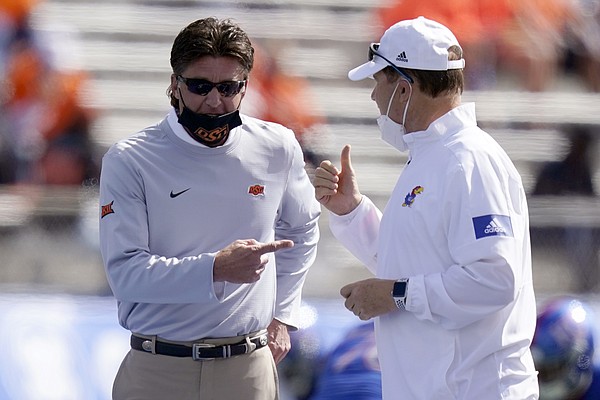 It's been four days since Kansas football coach Les Miles announced he had tested positive for COVID-19, but the second-year KU coach's spirits appear to be in good shape.

Miles shared as much on Sunday in a short video posted to Twitter that updated his condition.

"I am quarantined in my house, my health's pretty good, so I'm very thankful for that," Miles said in the 35-second video.

The plan at the time of KU's announcement about Miles' positive test was for him to be back with the team this coming Saturday when the Jayhawks travel to West Virginia for an 11 a.m. kickoff on Saturday in Morgantown.

There has been no update about whether that's still the plan or if it's even possible, but Miles, who said he has been conducting his business through Zoom meetings since isolating in his Lawrence home, said he was eager to get back to his team and his coaching staff.

Although Miles has been able to meet with his staff via Zoom, he will not do so with the media on Monday in his normal weekly press conference time slot.

Dating back to his days at LSU, it has been a long-standing practice of Miles' teams that coordinators do not speak with the media during the season. But the chance to talk with a few of them on Monday should shed some light on KU's struggles to open the season.

Fresh off of their second bye week of the 10-game season, the Jayhawks sit at 0-3 overall and 0-2 in Big 12 play, with a 50-game conference road losing streak still in tact.

Be sure to check back with KUsports.com throughout the day on Monday for the latest from KU's coordinators and a handful of players who are slated to meet with the media early Monday afternoon.

You think he might actually wear his mask consistently now and not shake opposing coaches' hands?

Nope, I don't think so either. Denial ain't just a river in Egypt (and that applies to a lot of the country right now).

Mask or maskless -- its everyone's personal choice -- unless you're part of KU football.

"All faculty, staff, students, affiliates, visitors, vendors, and volunteers must wear a face covering over their mouth and nose whether indoors or outdoors, except when alone in an individual’s personal self-contained office (not cubicles) or on-campus residence if others (excluding roommates) are not present."

Miles should be fined based on that picture. He's a millionaire expected to lead by example for his players and our fans alike.

I agree that Miles shoud lead by example.

But what does being a millionaire have to do with it?

Well Coach, I am happy to see your video update. I would ask that you better improve your audio (for the hearing impaired fan base). Your voice doesn't carry very well (in the video or media interviews), and it makes it hard for hearing impaired citizens to truly hear your message. Nonetheless, great to see you on video. Blessings for continued health and working your way back to the team and improving them for the future. Based on the above comments, Now that the 2nd year has started out the way that it has, I guess the Les Miles hire is not so attractive anymore? To all of the people who are complaining about him not wearing a mask. I watched the Bama @ Ole Miss game (this past Saturday Night), and after Coach Saban & Kiffin departed from their post game congratulations (or what ever was said) meeting. Coach Saban immediately removed his mask as he headed over to the sidelines for his post game ESPN interview. He was still around opposing players, coaches, media members, law enforcement officers, etc....... Some people CHOOSE to NOT live in fear. After all, it's their life (NOT yours). But, I don't chastise you for your desires to continue to live in FEAR though. My wife's a BSN-RN and she doesn't live in fear either.

Um, yeah, but it's not all about YOU. And yes, when you CHOOSE to NOT wear a mask around others while you may very well be an asymptomatic carrier of this virus, it's THEIR lives you are endangering, NOT yours.

So Michael, since you're saying that some people CHOOSE to not live in fear, I guess you're advocating that they not wear seatbelts, not go to the doctor for checkups, and not have fire alarms, burglar alarms, etc. I mean why choose to live in fear, right? Plus, as Eliot rightly points out, it is not only about the people who make such reckless and dangerous choices; it's also about all the people whose lives are AFFECTED by those choices. When OTHER people's lives are at stake, you DON'T have the right to simply live as you choose. That is part of your responsibility as a citizen of the U.S. (and, for that matter, the world). And it's not like people are being asked to make some great sacrifice. They only have to wear a FREAKIN' MASK, FOR GOD'S SAKE! They're not being asked to give an arm and a leg. Finally, WTF does the 'Bama-Ole Miss game have to do with the price of eggs????? Are you saying that because two OTHER coaches are equally reckless and irresponsible, that makes it okay for Miles and Gundy to be that way?????

Last I knew, there are NO State Laws on the Books in any of the 50 States, mandating that citizens wear mask. It's called FREEDOM of choice.

Citizens drive each and every day without wearing seatbelts (irregardless of State Laws, etc....).

The idea that YOU are right and I'm NOT, is subjective.

In regards to the Bama / Ole Miss game, I was clearly making a statement about the fact that Nick Saban immediately removed his mask after meeting up with Lane Kiffin. If Saban is YOUR Coach, would you hold him to the same MASK Standards (as what people on here are doing to Coach Miles)?

Why didn't ESPN Reporters make some MASK comment to Nick Saban when they held their Post-game Interview? I'm betting that they knew better. Saban would probably end the interview right then and head to the locker room.

Why is there all of the riducule for certain citizens (of this nation) who chooses to NOT wear mask. Yet, when people are out rioting, looting, pillaging and destroying property or out celebrating a Championship (without wearing their MASK) crickets can be heard from the MASK LOVING Mafia Membership.

Take for example the story about Markieff Morris winning an NBA Championship (on this same website). There's a picture of the entire team, and NOT a one of them are wearing a mask. Despite the fact that team is "IN THE BUBBLE", shouldn't they still be wearing MASK? Afterall, the media members are there taking pictures of the team. And, I'm sure they all got around each other and talked amongst each other (after the pictures were taken).

As far as I'm concerned, the lovefest membership for the "Mask Wearing" can take your respective masks and shove them where the SUN doesn't shine.......

You just don't get it...it IS just as simple as that.

If you continue to believe these completely insane things, you probably WILL get it. But sadly, it won't be just limited to you. You will no doubt spread it to MANY others -- just as so many of your ilk have. That's the main thing that idiots like you keep not understanding -- that your actions can drastically affect the lives of so many others.

Michael, wearing a face mask is not living your life in fear any more that wearing a seat belt, holding a handrail or wearing protective eye wear. It's a precaution and a simple and easy one at that. Many people choose to take this precaution not so much for themselves but out of concern of spreading the virus to others, especially the more vulnerable population. You can choose not to take a simple precaution like not wearing a seatbelt but doing so does not put others in harms way.

Coach, Please continue to be yourself. Yes we want you and those around you healthy, but some things demand a response such as coaching and respecting long held friendships. Be sure you are not discouraged from your aggressive approach to life and friendships by the folks in our society who have Covid -19 mentally in control of everything they think and do. Godspeed in your recovery.