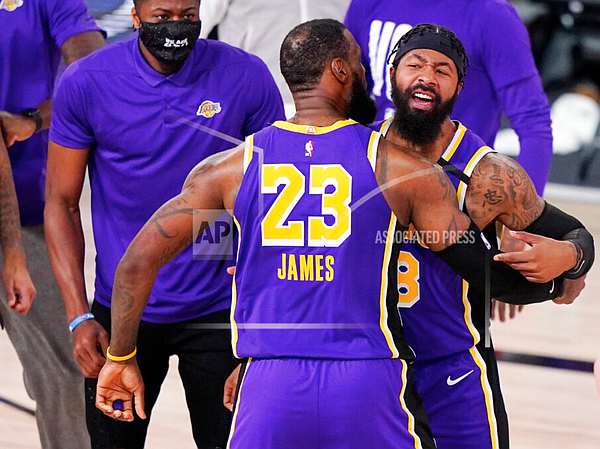 The Los Angeles Lakers are now just three victories away from winning a world title and that means former Jayhawk Markieff Morris is closing in on becoming the 13th Kansas player to win an NBA ring.

Morris has delivered a mixed bag of moments throughout the Lakers’ run this postseason, putting together some big games at times and hardly being used at others.

In Game 1 of the NBA Finals on Wednesday night, the former lottery pick played 18 minutes off the bench and tallied eight points, three rebounds and an assist in a Los Angeles blowout.

By now, most everyone knows the story of LeBron James’ connection to a couple of former Jayhawks.

The Lakers superstar, who is 3-6 in nine previous trips to the NBA Finals, has had a former KU player on his roster for each of the three titles he already has won — Mario Chalmers in 2012 and 2013 and Sasha Kaun in 2016.

If the Lakers finish the job against Miami, Morris would become the fourth and that no doubt would draw some national attention and probably another mention from James himself during one of the celebrations.

It was during the Cleveland Cavaliers’ parade in 2016 that James revealed that it was a text message from Chalmers that reminded him of the importance of Kansas Jayhawks in his championship runs.

There is still work to do, of course. And James himself said after Wednesday’s Game 1 win that he was not satisfied with the way his team played, particularly in the fourth quarter.

But the Lakers overpowered the Heat in the middle two quarters and appear to be well on their way to a fourth straight series win in these playoffs and the franchise’s 17th NBA title all-time, which would tie them with the Boston Celtics for the most ever.

For his part in the journey, Morris is now averaging 5.4 points and 2.8 rebounds per game in 16 appearances in this year’s playoffs.