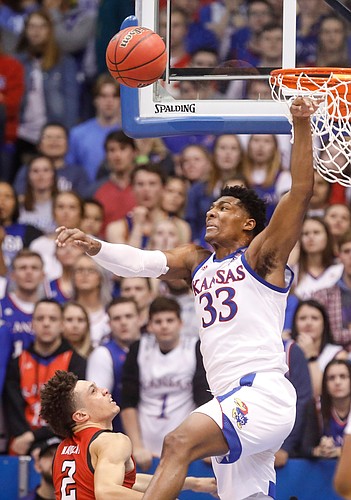 No matter how talented or how many stars they bring to town with them, every freshman basketball player at the University of Kansas goes through some type of an adjustment period.

Bryce Thompson, a five-star freshman guard from Tulsa, Okla., recently walked us through his.

“So say I break my defender down at the top of the key, I get down through the paint and Dave (McCormack) steps up,” Thompson began late last week during a Zoom call with media members. “Usually that's an easy lob to his man. But now I've got to put a little bit of extra oomph to make sure I get it over his arms because he's like 6-9 and can jump out the gym. So, you know those passes, those are easy in high school. Now they're a lot tougher.”

Even with those challenges, which have led to turnovers and off days — courtesy of several longer, taller players on the Kansas roster — Thompson said things have gone great during his first few months with the program.

“I'm loving it here,” he said. “I'm adjusting well, getting used to everything. We're putting in lots of plays and different sets and stuff, so (I'm) just trying to keep up with the pace just maintain.”

That type of approach — thinking the game in addition to playing it — is an indication of the mental preparedness of this gifted scorer who estimated recently that he took 1,000 jump shots a day this summer.

Kansas coach Bill Self has talked up Thompson's basketball IQ since the day he signed with the Jayhawks. Self, who coached Thompson's father, Rod, at Tulsa, has known Thompson since he was a toddler and has always suspected that his basketball education would put him on the fast track to success at every level.

And for whatever areas Thompson still needed help in, he found the perfect mentor to help guide him through the first couple of months in KU senior Marcus Garrett.