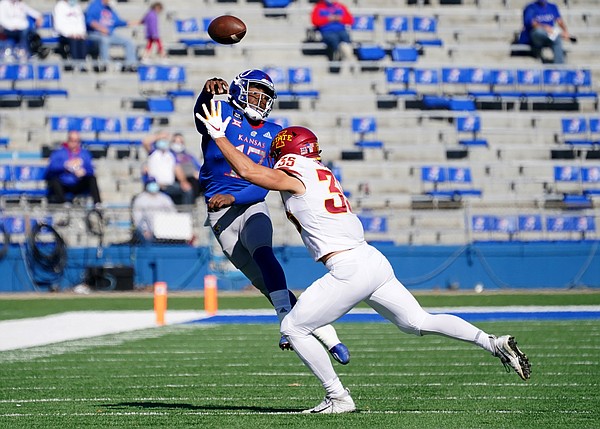 Question: Does being down two scores with 7 minutes to play against a ranked opponent qualify as progress for the Kansas football program?

Answer: It depends on who you ask.

For my money, it does. Or at least it did. Two late ISU scores and a furious fade by the Jayhawks last Saturday set the final margin at what we’re more accustomed to seeing from this program and made those small and very relative signs of progress harder to see.

But in that moment, with KU down 38-22 in the fourth quarter with the ball and a glimmer of hope, the Jayhawks could have taken a snapshot and pointed to the situation as something positive.

In a year full of outcomes and Saturdays that have been almost all negative, that's significant — as much for the players and coaches as for how it might help KU fans hang in there.

I noted that on Twitter on Saturday — in real time — and was both applauded and roasted by understandably frustrated KU fans, many of whom only looked at the 52-22 final score and not when the tweet was sent.

One follower, after some light ribbing, even mentioned that they had fallen so out of touch with the program that they were unaware that trailing by two scores midway through the fourth quarter was something fans could get behind.

“I guess I've lost touch with how low expectations have become,” the person wrote.

Expectations are absolutely that low. Anyone who thinks otherwise has not been paying close enough attention to the struggles endured by this program and just how bad things have gotten.

The whole exchange got me thinking more about reasonable and fair expectations for this program. Again, getting a good answer for where to set those for the rest of the season really depends on who you ask.

From those inside the program, it's the old Mark Mangino philosophy of chopping wood. That group believes that as long as you keep your head down, play hard and work to get better every day, that represents enough progress for right now.

“Of course the end goal for every team is to win games,” freshman quarterback Jalon Daniels said Monday. “But all we can do is keep working on the field, keep working in practice, keep working in the film room and just keep studying everything that we can.”

From the perspective of the long-suffering KU fan base, the expectation that's most common — among a wide range of far-fetched hopes and reasonable reality — is for KU to at least be competitive, even if that does not lead to victory.

Give this group credit. After a decade of watching the same old mess, it would be really easy to be in the all-or-nothing camp. But there are enough KU fans out there who truly do understand the steep climb the Jayhawks are still facing.

From the perspective of KU coach Les Miles, who shares Daniels' way of thinking, the expectation for the final four games of the 2020 season is tied to better execution on the field during practices and on game day, regardless of the age of those who are playing.

Freshmen like Daniels and others, on both sides of the ball, are getting closer to that these days. And each ugly loss or lost opportunity, as painful as they might be to watch, does carry with it the potential for growth.

While that might not make the Saturday beatings any easier to stomach or the alter what Kansas fans are hoping to see, it really is all you've got right now.

“Of course we're always going to put our 100% all on the field,” he added. “The score may not show that, but, as a team, we're always working and always trying to progress.”

Really good and timely article pointing out that we're still in the very early stages of this rebuild. I also like the recent article (was that on kusports?) that pointed out that realistic expectations before this season began was that this would be a worse season than the prior one not only because of the reduced practices (no Spring) but also because of the number of veterans lost to graduation and/or other reasons. Some of that was because of Beaty's Juco fetish, too.

Miles said Monday that Jalon was going to be just fine regarding that minor injury he dealt with last weekend... Unless something new has surfaced between then and now, he appears to be OK.

I see it as progress because I don’t have a choice. I will continue to support KU football regardless of the outcome. Quitting is not an option.

These players aren't quitting on us, I'm not gonna quit on them. Keep sawin' wood and eventually we'll all enjoy some wins together.