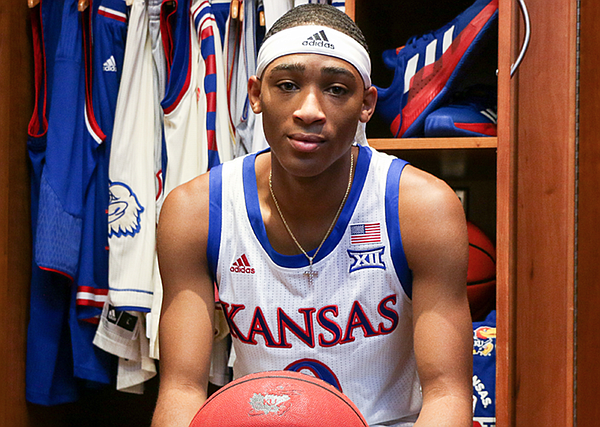 With so much depth and versatility on his roster and no real hurry to determine who will play where and how often, Kansas coach Bill Self recently had an epiphany about redshirt freshman guard Dajuan Harris.

“I don't want to ever say that somebody can't be a starter,” Self said last week during a Zoom meeting with the media. “But the reality of it is I'd love for him to be our backup point.”

With senior Marcus Garrett entrenched as the Jayhawks' top point guard, Harris represents stability at the position and also gives Self options for how to handle his backcourt.

While Garrett is the team's best defender and creator off the dribble, Harris brings a selfless style to the position.

“You could make a case that from a true point guard standpoint we haven't had one like him in quite some time,” Self told the Journal-World this offseason. “(He's) a guy who just knows how to get other people shots.”

He's also more than that.

In addition to thinking pass-first at almost every opportunity, Harris is a feisty defender and has worked to improve his jump shot.

“He's kind of like a smaller version of Marcus in some ways,” Self said.

That size discrepancy — Garrett stands 6-foot-5, 195 pounds and Harris measures 6-1, 160 — is one of the biggest question marks surrounding the first-year player who redshirted but practiced with the program during the 2019-20 season.

“He's light,” Self said of Harris during last week's Zoom call. “I mean he's light. So, physically, he's got to be very, very tough and be a pit bull-type player.”

Self believes Harris can do exactly that, but the KU coach said Harris' small frame and inexperience had been exposed during recent practices.

“He's got to find a way to compensate for not being very big,” Self said. “And I think he's got it in him to do that.”

The biggest area where Self believes that can happen is on the defensive end of the floor, where Harris can use his quickness and good hands to create problems for opposing ball handlers.

Asked in the offseason if he envisioned Harris playing a big role on the 2020-21 team, Self did not hesitate to answer.

“No question,” he said. “He's got it in him to be a good player. There's no question about that. He's got tremendous vision. He's got great hands. … You'll like his game. He's got feel. He's got some game.”