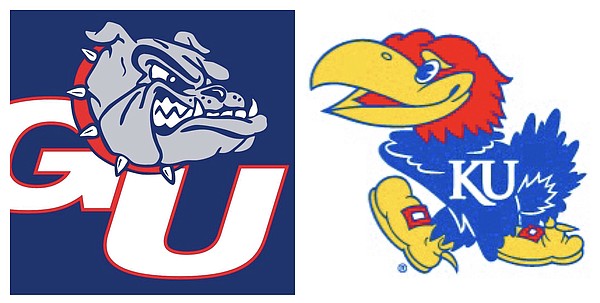 The rosters are a little different and we don’t yet know how talented the two teams actually are or where they’ll end up in March.

But there’s little denying that just the sound of “Kansas vs. Gonzaga” has a pretty NCAA Tournament-type ring to it. Depending on when you're reading this, the game now may very well be less than 24 hours away.

The timing of this week’s game is wild given the fact that many people believed the Jayhawks and Zags were the two best teams in college basketball entering last postseason in 2019-20 and now we get to see them square off to open the 2020-21 season.

We’ll never know if they might have met in Atlanta last year, had the COVID-19 pandemic not wiped out the NCAA Tournament.

But none of that matters now. They’re meeting on Thursday. For just the second time in history. And the two programs are led by big time talent and Hall of Fame coaches, who have been among the best in the sport for better than a decade.

With that in mind, here’s a quick look at a few fun facts and interesting notes about this week’s matchup, which is set to tipoff at 12:30 p.m. Thursday in Fort Myers, Fla.

• You might know already that Kansas coach Bill Self enters the game with 708 career victories and is just 12 shy of passing legendary KU coach Phog Allen on Division I college basketball’s career wins list.

But did you know that Gonzaga coach Mark Few’s next victory will be the 600th of his 21-year head coaching career?

That puts his career winning percentage at .828 and makes him one of the few coaches in the game who can compare his win/loss record with Self, who is 501-109 (.821) in 17 seasons at Kansas thus far.

Few’s teams have won 30 or more games in six of the past eight seasons, have never won fewer than 23 games in a season and have experienced a double-digit loss season just twice.

• Here’s a little more about the Zags’ run of late:

Gonzaga is 38-10 under Few in tournaments played Thanksgiving week, including a 27-4 mark in the past seven Thanksgiving-week tourneys.

Gonzaga has won 15 consecutive regular season openers, dating back to the 2004-05 season. Their last Day 1 loss came to Saint Joseph’s (KU’s Friday opponent) in the 2003 Coaches vs. Cancer Classic in New York City.

Starting forward Corey Kispert is poised to eclipse at least one milestone early this season. He sits just nine points away from joining Gonzaga’s 1,000-point club and is eight 3-point makes away from cracking the program’s top 10 list for 3-point shooting.

Gonzaga’s No. 1 preseason AP ranking is the first ever in school history.

• As mentioned above, KU and Gonzaga have met just once all-time. The Jayhawks were victorious in that game, picking up an 80-66 victory at Allen Fieldhouse on Nov. 13, 1998, when Few was in his final year as an assistant coach under Dan Monson.

Despite having limited experienced against the Jayhawks, the Bulldogs are 20-9 all-time against members of the Big 12 Conference.

The most recent meeting between the Zags and a team from the Big 12 came in the 2019 NCAA Tournament. Texas Tech topped Gonzaga in the West Regional final in Anaheim, Calif., to advance to the Final Four and, eventually, a runner-up finish to Virginia.

Speaking of Virginia, isn’t it wild to think that the Cavaliers are still the defending NCAA champs? No tournament last season means no one officially dethroned them.

• Whenever you enjoy the kind of success that Kansas and Gonzaga — and Self and Few — have enjoyed over the past couple of decades, there are going to be a few achievements that sound and look awfully similar.

Here are a couple.

Kansas has qualified for an NCAA-record 30 consecutive NCAA Touranments and will be looking to add to its own record with a berth in the 2021 tournament this season. Meanwhile, the Zags have qualified for the past 22 NCAA Tournaments, counting last season’s that was never played.

Gonzaga won the West Coast Conference’s automatic bid to the tourney by winning the postseason tournament earlier this year for the eighth year in a row.

KU’s NCAA-record of 14 consecutive regular season conference titles, which pushed the Jayhawks past UCLA with 13 a couple of years ago, was once a mark Gonzaga was gunning for.

The Zags won 11 WCC regular season titles in a row from 2001-11, finishing 139-15 against conference foes during that stretch.

• While the Jayhawks enter the 2020-21 season in search of a way to replace the production of two All-Americans who played a ton of minutes and did a lot of the heavy lifting for last season’s team, the Zags are also looking to replace quite a bit from last season’s squad.

Technically, KU returns four players with starting experience from a season ago, with Marcus Garrett and Ochai Agbaji being full-time starters and David McCormack and Christian Braun starting part of the time.

That foursome is expected to be in the starting lineup on Thursday, when the Jayhawks roll out their new-look lineup that features more depth and length but less certainty in the post and at point guard.

The Jayhawks left Lawrence for Fort Myers, Fla., on Tuesday afternoon and, according to their Twitter account, safely made it to the Sunshine State.

Next up: KU will face Saint Joseph's on Friday in Fort Myers.