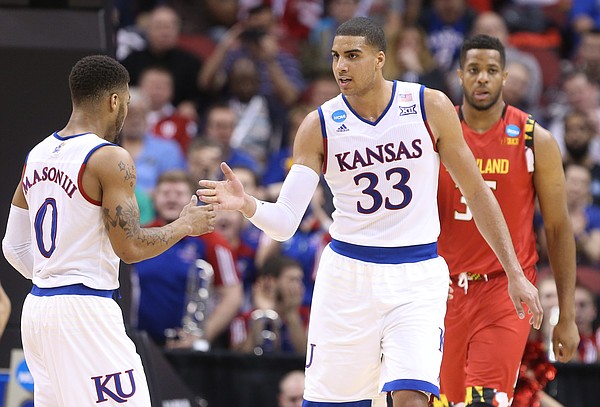 Ever wanted to take your shot against your favorite former Jayhawks in some form of competition, somehow, some way?

But you won’t need a new pair of high tops or even to get off of your couch to make it happen.

Later this week, on Friday, Nov. 27, Landen Lucas’ Sports For Life Foundation is hosting an online poker tournament in hopes of raising $100,000 to help kids continue to compete in athletics across the country.

Former KU greats Frank Mason III, Devon Dotson, Wayne Selden and Elijah Johnson will join Lucas and a handful of other celebrities from the poker world in an online event that will raise money for the foundation and give away a bunch of great prizes to various winners.

Joining the Jayhawks and other celebrity players are co-host and professional poker player Kelly Minkin, who also serves on the board of the Sports For Life foundation, and three-time Super Bowl champion Richard Seymour, formerly of the New England Patriots. ESPN sideline reporter Holly Rowe is also expected to join the fun.

The grand prize is the winner’s choice of a $10,000 seat into the World Series of Poker Main Event or an all-inclusive vacation for six people at Pueblo Bonito Sunset Beach Resort in Cabo San Lucas, Mexico.

For more information on how to donate or to register, log on to 0to100challenge.org/poker.

Pregame for the online poker event starts at 6:30 p.m. central and the cards will be dealt at 7 p.m.

As of Sunday, organizers said they were already nearly halfway to their goal of $100,000 for Sports For Life scholarships.

According to the foundation, every $250 buy-in to the poker tournament provides a Sports For Life scholarship for a child in need.

In addition to playing basketball professionally in Japan and building his foundation since leaving KU, Lucas also has found his calling as a card player.