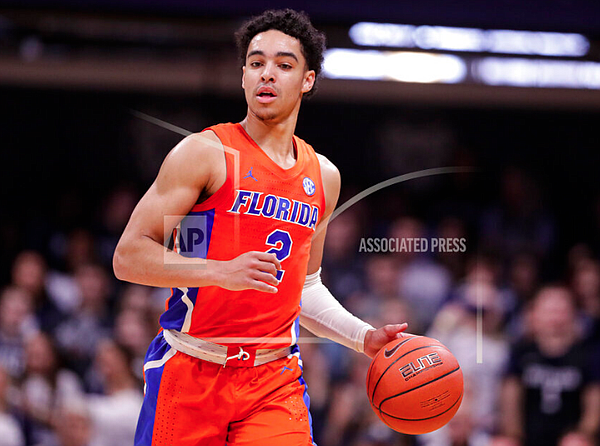 In this Dec. 7, 2019, file photo, Florida guard Andrew Nembhard (2) plays against Butler in the second half of an NCAA college basketball game in Indianapolis. Florida coach Mike White subtly divulges one of the reasons his team was among the biggest disappointments in college basketball last season. The Gators were simply too slow. (AP Photo/Michael Conroy, File) by Matt Tait

Nembhard, a former five-star talent who started 67 games at Florida during the past two seasons, will be eligible to play against No. 6 Kansas on Thursday in Fort Myers, Fla.

In high school, Nembhard helped Montverde capture the 2018 Geico High School Nationals title. He was ranked No. 20 nationally by 247 Sports in the 2018 recruiting class.

In addition to experience with the Gators, Nembhard has played on the Canadian senior national team alongside former Zags Kelly Olynyk, Kevin Pangos and Kyle Wiltjer.

He appeared in all five games for Canada at the 2019 FIBA World Cup in China, after playing in the World Cup qualifying games during the Summer of 2018. He led Canada to a silver medal at the 2018 FIBA U18 Americas, averaging 15.7 points and 8.8 assists over the course of six games. He scored 28 points vs. Argentina and had 17 assists in the semifinals vs. Puerto Rico.

His addition to a roster that already featured five-star freshman Jalen Suggs (6-4, 205) and experienced guards Joel Ayayi and Aaron Cook — along with a talented front line that includes Naismith Award watch list talents Drew Timme and Corey Kispert — had basketball analysts around the country buzzing on Tuesday.

The matchup between KU's Marcus Garrett (6-5, 195) and Ochai Agbaji (6-5, 210) and Gonzaga standouts Nembhard and Suggs should be as good as any we see all season. And whichever side gets the advantage there could have a significant edge in this early-season test.

You know KU would not have been granted such a timely waiver.

Ain't that the truth!