Self expecting interruptions during 2020-21 season; half a dozen 'Hawks in the NBA updates 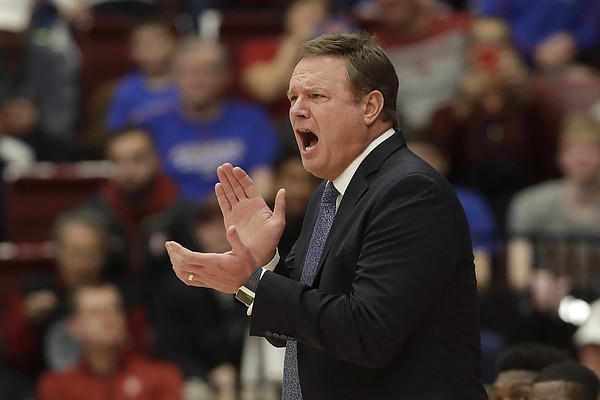 Kansas head coach Bill Self yells during the first half of an NCAA college basketball game against Stanford in Stanford, Calif., Sunday, Dec. 29, 2019. (AP Photo/Jeff Chiu) by Associated Press

With the season opener against top-ranked Gonzaga now less than a week away, all signs continue to point to the Kansas men’s basketball team being on pace to open the 2020-21 as scheduled — or is it rescheduled? — in Fort Myers, Fla., on Thanksgiving.

But it’s what happens after that that might be the most interesting and important part of the 2020-21 season.

While 26 games, including a day-after-Thanksgiving battle with Saint Joseph’s in Fort Myers, are on KU’s schedule after the clash with the Zags, Kansas coach Bill Self recently said it might be a little optimistic to presume that college basketball programs across the country, including Kansas, will play the upcoming season in full.

Such is life in college basketball under the COVID-19 pandemic. And the more prepared coaches, players and programs are for that reality today, the better off they’ll be if and when those interruptions hit their campuses.

Several programs have stopped practicing temporarily during the past month or so, with COVID cases on their rosters forcing them to pause their preparation.

And the building of the 2020-21 schedule, across all of college basketball, featured several different versions and required a ton of patience from all parties.

Even today, with the NCAA’s Nov. 25 start date charging fast, programs are wrangling with the virus and reshaping their schedules.

Future KU foe Creighton, which enters the season ranked No. 11 in the AP poll, just recently pulled out of the Crossover Classic in Sioux Falls, S.D., because of COVID issues.

That cost Creighton the first three games on their schedule, and the Blue Jays are facing the very real possibility of having to open their season with just one — or potentially even none — tune-up before coming to Lawrence on Dec. 8 because of the 14-day quarantine requirement.

“I know the max number's 27,” Self said of games allowed by the NCAA this season. “And there may be some schools that get to that number. But I think there will be interruptions.”

As a result, Self said he expected it to be awfully difficult to use the upcoming regular season as a gauge for which teams are the best in the country.

“I really believe the rankings, the seedings and all that stuff this year will be less important than any other year,” Self said. “Because I don't think we'll be comparing apples versus apples until we get to the NCAA Tournament.”

Kansas senior Marcus Garrett was one of 50 players named to the Naismith Award’s preseason watch list earlier this week.

The honor was the latest in a long line of preseason accolades for KU’s top returning player.

Those numbers, among others, earned him the 2020 Big 12 Defensive Player of the Year honor, a spot on the USBWA All-District VI team, an all-Big 12 second team nod and a unanimous spot on the Big 12 all-defensive team.

According to Yahoo Sports NBA writer Keith Smith, the Detroit Pistons have exercised the 2020-21 team option to retain the services of former KU standout Svi Mykhailiuk.

Mykhailiuk’s contract for the upcoming season will become fully guaranteed if he is not waived before Saturday. Reports have shown that contract to be worth $1.66 million.

After starting his career with the Los Angeles Lakers, who drafted him 47th overall in the 2018 NBA draft, Mykhailiuk was traded to Detroit during the 2018-19 season.

He played just 39 games with the Lakers but started 27 of the 56 games he appeared in for the Pistons. His minutes-per-game jumped from 10.8 in L.A. to 22.6 in Detroit and he was a full-time starter by January.

Mykhailiuk averaged 9 points per game with the Pistons and shot 40.9% from 3-point range during the 2019-20 season.

Mason split time between the Bucks’ roster and a spot on the team’s G League squad in 2019-20. He was named the G League MVP after leading the league in scoring, at 26.4 points per game, and added 5 assists and 3.4 rebounds per game in 23 games with the Wisconsin Herd.

Early Thursday morning, barely an hour after the 2020 NBA draft had wrapped, Mason, the No. 34 overall pick in the 2017 NBA draft, reached out to undrafted Jayhawk Devon Dotson on Twitter to offer his words of encouragement for Dotson’s opportunity to sign with the Chicago Bulls as a free agent.

“Congrats, (Devon),” the tweet read. “Keep grinding for what you deserve.”

He came to Kansas one year after Andrew Wiggins’ lone season with the Jayhawks and played just one year himself before jumping to the NBA.

Now, Kelly Oubre Jr., may be close to teaming with Wiggins with the Golden State Warriors.

In the wake of this week’s news about Klay Thompson’s Achilles injury that will cost the superstar guard the 2020-21 season, Oubre’s name has emerged as one to watch as the Warriors seek to find a replacement for Thompson.

Just days ago, Oubre was traded from Phoenix to Oklahoma City as part of the deal that sent Chris Paul to Arizona, and now the former Jayhawk may be on the move again without so much as setting foot in the state of Oklahoma.

Jackson, the No. 4 overall pick in the 2017 draft by Phoenix, spent last season with Memphis, playing both with the Grizzlies and in the G League.

Jackson played the final two years of his prep career in Napa, California, but grew up in Detroit. He chose Kansas over Michigan State when it came time to make a decision on his college future.

Former Kansas forward Marcus Morris, who watched his name and number go into the Allen Fieldhouse rafters last season, will be staying with the Los Angeles Clippers.

Wojnarowski reported late Friday that Morris had agreed to a four-year deal worth $64 million to continue his career with the team that traded for him in the middle of last season.

The former lottery pick averaged 16.7 points for the New York Knicks and Clippers last season. He was a key part of the Clippers' playoff push that ended in the Western Conference semifinals.

Shortly after news of the agreement leaked, Morris acknowledged the move on his Twitter account, writing simply, "Run it back!" to his followers.

A couple of years removed from a coaching gig under Stan Van Gundy with the Detroit Pistons, former Kansas star Rex Walters has agreed to rejoin Van Gundy in his new role as the head coach of the New Orleans Pelicans.

After leaving the NBA following the 2017-18 season, Walters spent time in the college ranks, first at Nevada and then under former KU great Danny Manning at Wake Forest.

Prior to that, the athletic lefty who was the No. 16 overall pick in the 1993 NBA draft, was the head coach at Florida Atlantic and San Francisco.