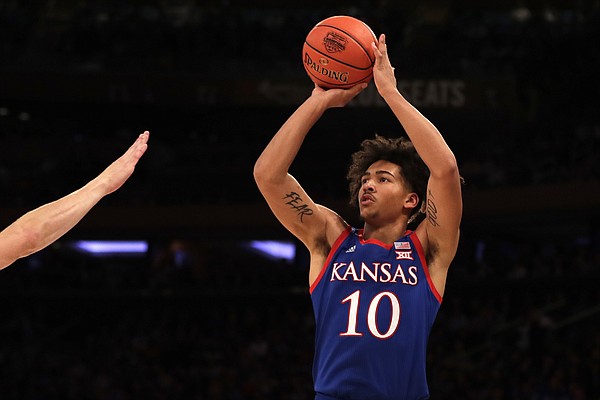 Kansas forward Jalen Wilson (10) is pictured in action against Duke during the first half of an NCAA basketball game Tuesday, Nov. 5, 2019, in New York. by AP Photo/Adam Hunger

You know his name. You’ve even seen him play. But, yet, you still don’t quite know what to make of him heading into his second season with the program.

The reason? He didn’t exactly play in his first season, logging just a minute or so in the season opener against Duke and then suffering what became a season-ending injury within seconds of checking into Game 2.

Those closest to KU guard Jalen Wilson have said that he worked harder than ever in the offseason to come back from his injury and that it actually motivated him to improve and be better.

Wilson himself has said that he thinks his leg is now stronger than it was before the broken ankle that cost him the 2019-20 season.

And KU coach Bill Self also has said that Wilson has “improved a lot” and that his new look — hair trimmed and body slimmed — has him poised for a strong season.

Here’s a quick look at what to expect from Wilson’s debut Part Deux.

He will: Have some catching up to do because of the injury that kept him out all of last season

Despite all of the positive signs surrounding his recovery and bounce-back from the broken ankle, it’s still fair to expect Wilson to need some time to adjust to the college game.

Practicing with the team and going through the flow of the season a year ago no doubt did him some good. But there’s still no substitute for the experience one gains on game night, with the lights shining and the pressure turned up a notch.

Wilson has played in plenty of high-profile games and big time atmospheres during his high school and AAU days. But playing at Kansas is obviously a step up. And, if the season opens with marquee games with the likes of Kentucky, Gonzaga and others, he could be in for a few of those “holy cow, I’m really here” moments.

That’s not to say Wilson isn’t ready for the challenge. But he may need a couple of games to get a feel for things and to get a better understanding of exactly how Self plans to use him and what the game is like at this level.

At 6-foot-8, 215 pounds, Wilson’s frame provides him an opportunity to play a lot of different positions and in a variety of styles and he'll find a role sooner rather than later. Just don't be shocked if it takes a little time.

He won’t: Be lacking for confidence

Despite the setback from a season ago and the time he figures to need to get fully adjusted to the college game, Wilson will hit the floor full of confidence night in and night out.

He’s one of those players who always believes he’s as good as anybody in the gym and has often been able to back up that claim with his play and effort.

The fact that he improved his body and his game in the offseason only figures to boost Wilson’s confidence and the Jayhawks could be sitting on a gold mine here if Wilson is able to settle into a consistent role.

Even if he’s not, Wilson has the skills to contribute on any night. And he has talked a lot about how he always has had to grind through adversity in his career, be it in high school, on the AAU circuit or now in college.

The road bumps don’t bother Wilson. In fact, now that he’s on the other side of his most recent one, he may be better for it.

While Wilson is certainly in the mix to crack KU’s starting lineup this season, he’s not a lock to do so and could wind up coming off the bench just as easily.

That may not be much of a surprise to most people, but it’s significant in the context of Wilson’s trajectory as a high school prospect.

Remember, in high school, Wilson was drawing phrases like, “first-round pick” and “elite talent,” and the upcoming season will be his first opportunity to truly showcase why people were using those labels.

The Jayhawks are deep, so it’s not like Wilson is going to break out and become KU’s next 20 points-per-game scorer. But the most talented players tend to showcase themselves in ways other than scoring and Wilson could be poised to do just that this season.

While shooting and his range were listed as his top strengths during his prep days, he also was known, even then, as a gifted passer with good vision and feel.

He’ll have no shortage of options to help set up with those skills this season, and, if his defense can rise to the level where it meets his offensive prowess, he could quickly become one of KU’s best all-around players.