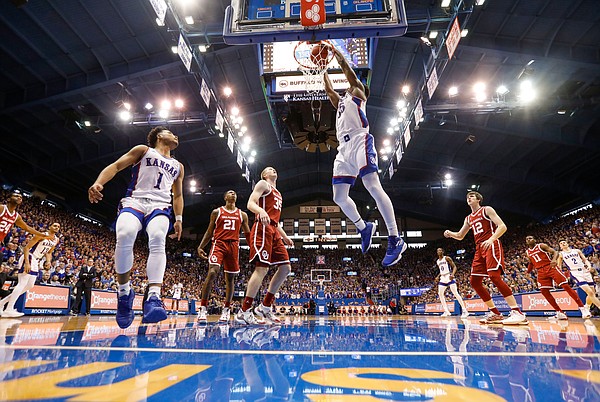 The 2020 NBA draft is now just a couple of weeks away and no one should be surprised if former Jayhawks Devon Dotson and Udoka Azubuike go higher than previously expected.

That's not to say that either former KU All-American is headed for the draft lottery, or even a cushy spot in the middle of the first round. But they both could wind up being first rounders and their athleticism and recent testing is a big reason why.

Clearly, waiting months longer than most draft prospects have to wait has not in any way hurt Azubuike or Dotson, as both have continued to work harder than ever before, building their bodies and their resumes for their shot at the NBA.

With draft hopefuls just recently getting the opportunity to meet with teams and do individual workouts, the two Jayhawks have put their improvements on full display in recent weeks and have turned heads during the pre-draft process.

According to reports from DraftExpress.com, both former KU players have put themselves in some pretty rare company during recent weeks.

Draft expert Jonathan Givony reported that Dotson's 3.02-second three-quarter court sprint was the fastest time at this year's NBA draft combine and the second fastest time in that event in the last decade. Only Utah Jazz superstar Donovan Mitchell's 3.01-second time was faster.

In addition, Dotson had the best lane agility time (10.44 seconds) and measured a vertical leap of 40.5 inches, roughly two inches higher than his best at Kansas.

Get this, though: Azubuike's standing vertical at this week's combine was an eye-popping 37 inches, which Givony reported as the highest by a center in NBA combine history.

His maximum vertical, which is measured with momentum, was 41 inches, which, Givony noted, was 10 inches higher than Azubuike's max vertical at the 2018 combine.

In addition, the former KU center weighed in at 260 pounds (a far cry from the 280 he was listed at throughout the start of his Kansas career and even 10 pounds lighter than his playing weight from the past two seasons.

Givony summed it up best when he called Azubuike, “a complete outlier physically who also dominated the college game.”

In a different era, Azubuike's skill set, size and KU career would have made him a top-five pick. Today, though, he'll have to settle for a late first-round ceiling and hope he connects with the right team that will find a way to utilize and value his freakish talents.

Dotson's really in the same boat. Although his frame and numbers don't jump off the screen at you the way Azubuike's do, anyone who has watched him knows that his speed is deadly and absolutely will translate to the pro level.

If, as the numbers suggest, he has improved his strength and athleticism in a way that can benefit him on game night, he, too, will be a steal for some team that decides to take a gamble on his lack of height. Everything else is absolutely there with this guy.

And it's going to be fun to see where both players are picked in the Nov. 18 draft.

WHERE WILL UDOKA AZUBUIKE & DEVON DOTSON BE DRAFTED?