Why Chicago appears to be a solid spot for former Kansas point guard Devon Dotson, who went undrafted in Wednesday's NBA draft 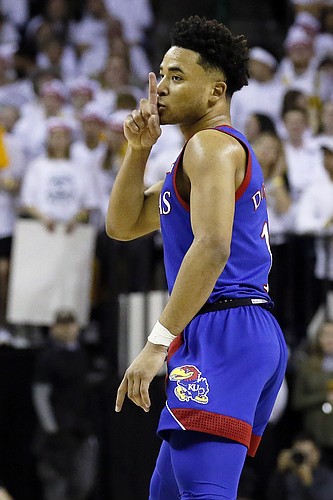 Kansas guard Devon Dotson gestures to the crowd after a three point basket against Baylor during the first half of an NCAA college basketball game on Saturday, Feb. 22, 2020, in Waco, Texas. (AP Photo/Ray Carlin) by Associated Press

It’s easy to listen to Kansas basketball coach Bill Self talk about Devon Dotson not getting drafted being a good thing and question if Self is being real or trying to put the best possible spin on a tough situation.

But Dotson’s ultimate landing spot with Chicago as an undrafted free agent — as was reported by ESPN's Adrian Wojnarowski late Wednesday night — makes it a lot easier to believe what Self was saying.

Forget the hometown boy returns to the team he grew up idolizing storyline for a minute. That’s a nice twist and certainly tugs at the heart strings. But that’s not what the NBA or the NBA draft are about. They’re about making money, finding minutes and carving out a career path.

And Dotson could not have found a much better place to start than The Windy City.

The Bulls have a legitimate need at the point guard position behind second-year starter Coby White and Dotson could soon find himself filling that role.

Given what happened Wednesday night, it’s possible tha he starts in the G League or bounces back and forth for a while between the Chicago Bulls and the Windy City Bulls. But unless the NBA Bulls address the point guard position some other way in the next six weeks, Dotson could find himself involved sooner rather than later.

Zach LaVine is the Bulls’ leading scorer and best player. And he has point guard skills. But he’s so much better off the ball and is a scorer above everything. Even White, who Chicago picked No. 7 overall in last year’s draft, has shown tendencies of being more of a scorer than a facilitator. So the potential exists for Dotson, if he impresses, to play with one or both of those guys instead of just behind them.

Fourth-year pro and former second-round pick Tomas Satoransky is listed on the Bulls’ depth chart as their backup point guard. And when you click on his player profile it says “Shooting Guard.” He’s also 6-foot-7, 210 pounds.

There’s certainly the possibility that the Bulls could bring in a veteran PG to smooth out the position before the 2020-21 season gets going on Dec. 22. But they also might not.

That’s probably what made Dotson such an appealing addition for the Chicago front office. They’ve got some time to see what he can do now. And if he delivers and proves capable of handling a backup role, they can spend their free agent dollars elsewhere.

Remember, this was a 22-win team last season, so it’s not as if they have solutions and stars up and down the roster.

Beyond that, new Bulls coach Billy Donovan should be a terrific fit for Dotson, given his familiarity with the college game and tough and tenacious lead guards.

So, if Dotson is such a good fit and is walking into a great opportunity, why didn’t Chicago just draft him?

The Bulls had just two picks and a laundry list of needs in Wednesday’s draft. And with one of those being in the top-five we knew Dotson wasn’t going there.

The other Chicago pick came at No. 44, where the Bulls drafted Montenegro center Marko Simonovic, a draft-and-stash prospect who seems to fit the NBA’s mold for 6-foot-11 big men. Those types of picks — mid-40s and beyond — have become the prime place in the draft to take a big swing on someone who could become a star. And it’s likely that the Bulls, by that point, believed they would still wind up with a solid option among the undrafted free agent point guards.

Whether they thought Dotson would be available or not hardly matters. Seton Hall’s Myles Powell, Marquette’s Markus Howard and Kentucky’s Ashton Haggans all went undrafted, as well, proving there were always going to be big names and talented lead guards available after the draft.

It just so happened that the Bulls got Dotson and, from the sound of it, that may have been the plan, by both sides, from around the No. 45 pick on.

KU coach Bill Self said after the draft that he thought Dotson’s family and agent, at some point, began discouraging teams from drafting him so they could have more say in where he ended up and so he could get to Chicago.

It remains to be seen how it all works out, but, as of right now, being with the Bulls certainly appears to be a better situation for Dotson than if he had landed with some of the other teams that picked point guards late in the second round.

Here are some examples.

Sacramento at No. 43 — A lot of mock drafts had Dotson landing in Sacramento, but the Kings took Texas Tech guard Jah’mius Ramsey with this pick and Iowa State star Tyrese Haliburton at No. 12 earlier in the night. Add those two to a roster that already includes De’Aaron Fox and Cory Joseph at the point, and you’re not really finding room for a fifth point guard there.

Golden State at No. 48 – Who wouldn’t want to land with the Warriors? It’s obvious why this spot would’ve been appealing. But Golden State snagged Nico Mannion, a projected first-round pick on a lot of mock drafts, in this position, which proves just how much talent there is in the second round. Same thing goes for Cassius Winston to Oklahoma City at No. 53.

Charlotte at No. 56 — While it would’ve been cool for Dotson to get picked by the team that plays where he played his high school ball, he would’ve been joining a roster with Devonte’ Graham, Terry Rozier and, oh yeah, the No. 3 overall pick in Wednesday’s draft, LaMelo Ball. No path to playing time there.

New Orleans at No. 60 — The Pelicans picked Alabama star Kira Lewis Jr. in Wednesday’s lottery and they’re pairing him with Lonzo Ball, Eric Bledsoe and George Hill. Hearing your name called and being able to forever tell people you were drafted would’ve been nice, even at No. 60. But this would not have been an ideal landing spot either.

By now, you surely get the point.

For all of the things Dotson does well and all of the reasons he could’ve — and maybe even should’ve — been drafted, there are also cases to be made for why it didn’t happen.

None of that matters now, though. What’s done is done. He knows his destination. And he’ll be able to use that nobody-believed-in-me mentality during his transition to the NBA.

It’s something Dotson’s very familiar with and comfortable overcoming and there’s no reason to think he can’t make that mindset work for him again this time around.

KU coach Bill Self on Udoka Azubuike going in first round and Devon Dotson being undrafted by KUsports.com

Bill Self on Devon Dotson landing with Chicago Bulls and what Udoka Azubuike will bring to Utah Jazz by KUsports.com

Good article Matt, not that it’s a surprise.

There were a few picks farther up the draft board that did have me wondering more.

Crazy that Dtae got drafted over, but despite the hype I still pick him.

To much analysis....Devon Dotson should be playing in junior season in Lawrence. It was a bad decision. His shot needed at least another year. That being said, to leave as a Sophomore and not get drafted? Something is wrong with the advising.

Yep, slow to get it off and release way too low. Almost impossible to get a shot up in the NBA. Anybody advising him honestly would have told him that.