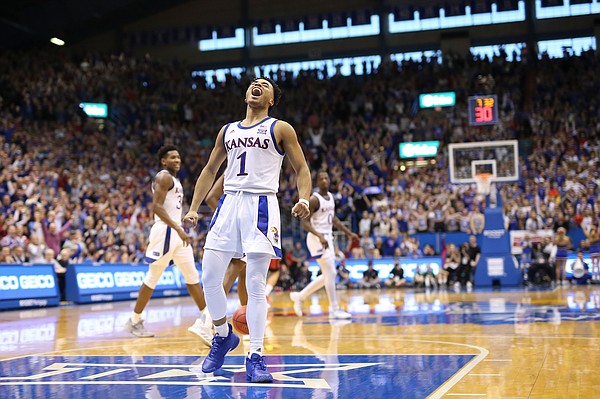 Kansas guard Devon Dotson (1) roars after a lob dunk to Kansas forward David McCormack (33) during the second half, Saturday, Feb. 1, 2020 at Allen Fieldhouse. by Nick Krug

But after working with his agent and family to find the best landing spot after unexpectedly going undrafted, Dotson took to Twitter on Thursday night to show that he was doing just fine.

In a short video posted to his social media account, Dotson said simply, "I don't know what happened... But I know what's gonna happen."

With that, he confirmed that he was signing a free agent contract with the Chicago Bulls.

You surely know by now that Dotson is originally from Chicago and grew up rooting for the Bulls and former NBA MVP Derrick Rose, another Chi-Town native who played for the Bulls.

Dotson's family moved to Charlotte in 2011 and he developed his game and the foundation for what eventually became an All-American career at Kansas in the Tar Heel state.

Throughout his life, Dotson has been counted out and overlooked, largely because he spent most of his childhood playing a grade or two up, against bigger, stronger and more mature athletes.

He never let that deter him from competing like he belonged and eventually became a five-star prospect who signed with Kansas.

During his two seasons with the Jayhawks, Dotson ran the team as coach Bill Self's unquestioned point guard, using that same chip-on-his-shoulder mentality to more than hold his own in the Big 12 and against some of the best players in college basketball.

Now, fueled even more by his draft night snub, Dotson will take that chip and his talent to Chicago, where he likely will receive opportunities with both the NBA's Bulls and the G League's Windy City Bulls while he gets his pro career off the ground.

In Chicago, Dotson finds himself added to a roster that has no established point guard and even less depth at the position.

Most NBA draft analysts had Dotson projected as a second-round pick prior to Wednesday's draft, and if he plays to that level during his early days with the franchise, he could quickly carve out a role as the team's backup point guard.

The Bulls also could look to add experience and depth at the position in the coming days and weeks, so Dotson's opportunity and the challenge he'll face is not completely known just yet.

But for a prospect who no doubt was stunned to not hear his name called in the draft less than 24 hours earlier, announcing that you've signed with your hometown team is a pretty good way of bouncing back.

Good luck to Devon! I expect him to "show them" like Devonte has. He has the tools, that's for sure.

He still shoots a set shot reminiscent of the 1950s.

i loved Devons spirit in this video post ......I know he was crying on the inside......to have your friends and family there for your draft day celebration........only to hear your name never called has to be devastating . but i know Devon will put in the work to make it ......and Im pulling for you as well as the Jayhawk Nation .

Barring injury, I'll be shocked if Devon doesn't become at least a solid NBA player for a long time. And I fully expect him to outlast at least half of the drafted players.