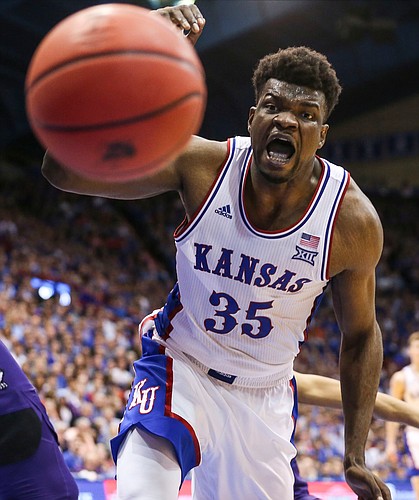 Kansas center Udoka Azubuike (35) chases down a ball during the second half, Wednesday, March 5, 2020 at Allen Fieldhouse. by Nick Krug

Like Azubuike (see below), Devon Dotson also made public his meal of choice for draft night — Wing Stop.

In addition, Dotson showed off his flashy new suit, complete with an inscription inside the jacket that sent Kansas fans into a frenzy on social media.

Dotson posted a few different photos of him in his suit on Twitter and Instagram and the images quickly made the rounds on social media accounts everywhere. 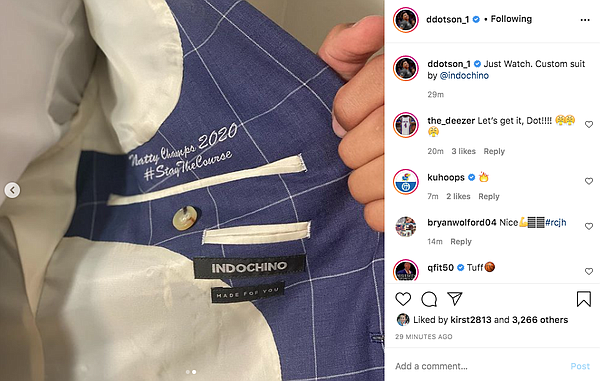 The inside of Devon Dotson's draft night jacket paid homage to KU's 2019-20 season, which ended with the Jayhawks sitting at 28-3 and poised to be the No. 1 overall seed in the NCAA Tournament, before the pandemic canceled the postseason. by Matt Tait

Devon Dotson's father, Dana, told the Journal-World on Tuesday that Devon would watch tonight's draft in Charlotte with his family and friends.

That likely would've been the case even if the draft were held live at Barclay's Center in Brooklyn, as in years past, because very few second-round projections wide up attending the draft.

We now know, though, where Azubuike will be for the draft. Or at least it appears that we do.

Just after 4 p.m. central time on draft day, Azubuike posted this photo on Instagram. Try not to read into him wearing a green T-Shirt too much!!!

The location tag on the photo reads Jacksonville, Fla., which makes sense given the fact that Azubuike played prep ball in that area and his guardians live there, as well.

In addition to potentially finding out where he's watching, we also saw that Dok picked up one of his first endorsement deals — or at least a mini-deal — as he promoted Papa Murphy's for his draft night dining experience. 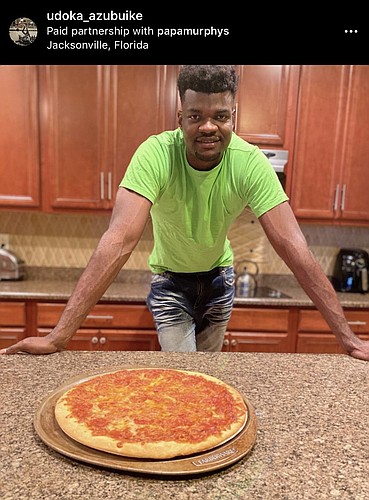 There are few things cooler than players getting drafted by their hometown teams.

Raleigh, N.C., native Devonte' Graham came close to experiencing that when Charlotte picked him a couple of years ago. And there have been countless other examples of that happening throughout the years.

One way it could happen this year is if the Chicago Bulls select Devon Dotson.

Dotson played most of his best ball in Charlotte, where he went to high school. But at his core, he's a Chicago native. And landing in The Windy City on draft night no doubt would register as a dream come true for Dotson and his family.

Barring a trade, the only way that could happen as of now is if Dotson falls to No. 44. The Bulls also own the No. 4 overall pick, but we know Dotson's not going there. If he falls, though, and the Bulls have a shot at him, that wold make an already unbelievable night even more memorable.

And this short video about it surfaced on Twitter this afternoon.

Dotson's going to be happy wherever he ends up, but heading home to Chi-Town would likely create that pinch-me-I'm-dreaming moment.

Growing up in Chicago, Devon Dotson looked up to Derrick Rose and modeled his game after the former MVP. pic.twitter.com/7rGi8fRSOn

None by The Undefeated

I've heard that there is some interest in former KU center Udoka Azubuike from the Boston Celtics. And the Celtics may be in great position to take him if their interest stays strong throughout the day.

The Celtics have three first-round picks — No. 14, No. 26 and No. 30 — and, if they keep all of them, could easily make a case for using one of the last two picks to gamble on Azubuike.

The phrase, "if they keep all three of them" might be the key part of that last sentence, as it seems like there's some interest in Boston in trying to package picks to move up in the draft or make a splash with some other kind of acquisition.

The Celtics played most of last season with an undersized lineup, using Daniel Theis, Robert Williams and Enes Kanter as their bigs.

Theis (6-foot-8, 245 pounds) was solid. And he's athletic and intelligent. And Williams, at 6-8, 237, is a banger who can mix it up with anybody inside. But none of the three bring anything close to what Azubuike does in terms of pure size and strength.

The tricky thing here, at least initially, is that drafting Dok does not exactly help the Celtics right away. As KU coach Bill Self said last week, the goal for Azubuike and Devon Dotson should be to find a spot they can fill a role as a back-up.

Azubuike would have the opportunity to do that in Boston, playing behind Theis and Williams and perhaps coming into the game to match up with bigger bodies on opposing teams.

And, with the Celtics having two other picks to make in the first-round, they have flexibility and options. Heck, they could even take another big body at No. 26 and let Azubuike and him compete for the spot while taking an impact-type player at No. 14.

Who knows. All I know is it sounds like there is some interest there and, the way the draft board falls, Boston is a team to keep an eye on when talking about Azubuike.

In normal times, the NBA draft takes place in June and we spend a good portion of the month breaking down the draft stock associated with any former Jayhawks who are eligible.

But normal times these are not, so football and fall sports and preparing for a new Kansas basketball season have taken up a good chunk of the past month.

But draft day has arrived nonetheless and I don’t know if it’s the warm weather and sunshine in Lawrence today or what, but, darn it, it actually does feel like draft day.

The wait has no doubt been longer and more intense for former KU All-Americans Udoka Azubuike and Devon Dotson, but the guess here is that the two will soon find out that it was worth every minute of patience they could muster.

The consensus opinion around the mock draft world is that the two Jayhawks are most likely to land somewhere in the first 10 picks or so of the second round. But those who have followed the NBA draft before — and this year’s draft board in particular — know that anything can happen on draft night, so it should be a wild ride a little later today.

We’ll be here to track it and will have as much reaction as we can get after the picks are made. But while we wait, I’ll be updating this blog throughout the day with any KU-related tidbits about draft night that I’m hearing. So check back often and see what’s what.

For what it’s worth, I still think there’s a decent chance that Azubuike finds his way into the first round and I think Dotson should go between 35-40, no later.

Time will tell. But based off of how they’ve tested in the past couple of months and what they were able to do during their college careers, I think both have positioned themselves well to be a key part of a couple of teams’ draft night plans.

Check back throughout the day for whatever nuggets I can dig up.

For now, though, let’s start with my predictions.

I’m going with Azubuike at No. 30 to Boston with the last pick of the first round and Dotson at No. 39 to New Orleans.

I'll dive into the Dok pick a little more in a bit. But I went Dotson to New Orleans because the Pelicans are dealing with the departure of PG Jrue Holiday. It's entirely possible that they'll address that with their first-round pick (No. 13 overall) or even at No. 24 in the first round. And if they do, it's probably less likely that they'd double down on the PG position at No. 39.

But if they don't and they add size and play-making wings in those two spots, I could see Dotson being awfully appealing there if he's still on the board. He very well might not be.

For one, he's as fast as any guard in the draft and would fit the up-tempo style the Pelicans, with Zion Williamson, Lonzo Ball and Brandon Ingram, like to play. And, with two higher picks already in the bag, there's less pressure to hit a home run at No. 39, and they could view Dotson as a high-upside lottery ticket that, if it cashes, could pay off big time.

Remember, he's not stepping into any kind of starting lineup any time soon. So we're talking about a guy who can handle running a second unit when the starters are out. Dotson is that guy. And adding him to the mix would free up Eric Bledsoe (who they got for Holiday) to play off the ball with the second unit.

Veteran George Hill is currently on the Pelicans roster, too, but for all of his wisdom and experience, there are just some things that a younger Dotson can do that Hill can't.