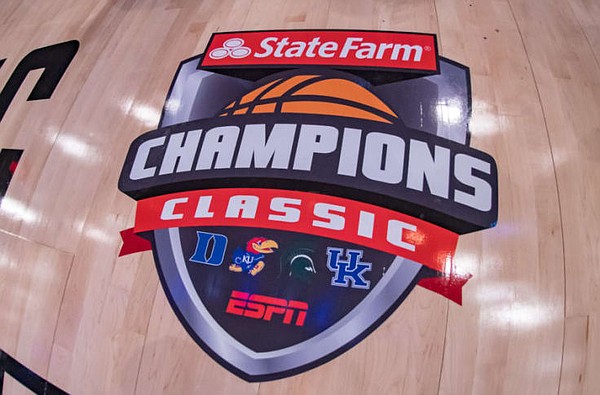 ESPN announced Wednesday that the 2020 Champions Classic clash between No. 6 Kansas and No. 9 Kentucky on Dec. 1 will be played in Indianapolis.

Originally scheduled for Nov. 10 in Chicago, the annual season tipoff — that also features Duke and Michigan State — was moved back because of changes brought about by the COVID-19 pandemic.

The game always has been on KU's schedule, and Indianapolis has been rumored to be the alternative site for several weeks. But it was not official until Wednesday.

Kansas and Kentucky will tipoff off at 8:30 p.m. on ESPN that night from Bankers Life Fieldhouse, home of the Indiana Pacers. The game will follow the Duke-Michigan State game, which is slated to tipoff at 6:30 p.m. at Duke's Cameron Indoor Stadium.

Two other games featuring top-12 teams — Gonzaga vs. Tennessee and Baylor vs. Illinois — also were announced for Indianapolis on Dec. 2.

KU will open the 2020-21 season on Nov. 26 against top-ranked Gonzaga in Fort Myers, Fla. The Jayhawks will also play St. Joseph's in Fort Myers on Nov. 27 before returning home to prepare for the trip to Indianapolis.

Kansas is 4-5 all-time in the Champions Classic, and the Jayhawks have won three of their last four appearances in the event. Kentucky and Duke are each 5-4 and Michigan State is 3-6 in the annual showcase.

KU has won three of the last four meetings with Kentucky, and UK owns a 23-9 all-time edge in the series. KU is 1-2 versus UK in the Champions Classic.