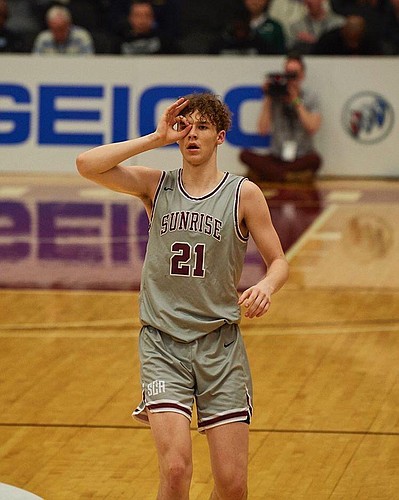 With family members surrounding him inside the Sunrise Christian Academy gymnasium, four-star Class of 2021 forward Zach Clemence made his commitment to Kansas official on Saturday morning by signing his national letter of intent.

"This day has been great so far," Clemence told Jacob Polacheck, a contributor to Zagsblog.com, who was at the Saturday morning signing. "Everything has happened just how I wanted it to."

Decked out in a blue KU hat and a black Kansas T-Shirt, Clemence signed on the dotted line and officially became the second new addition to the KU program this week.

“We've got two versatile players in Zach and KJ,” KU coach Bill Self said in a news release announcing Clemence's signing. “Both will be very good players for us (and) they will be impact players for us immediately.”

Neither player will be on the roster until next season, but that versatility Self spoke of falls in line with some of his other recent signings, which have added long, athletic players who can play multiple positions to the KU roster.

Clemence is known mostly as a stretch 4 type of player, who has the ability to play down low because of his height but is just as comfortable playing — and especially shooting — on the perimeter.

“Zach is a 6-foot-10 youngster that can really shoot the ball,” Self said of the No. 29-ranked player in the nation per Rivals.com. “We haven’t had anybody here like Zach that is truly a 4 that can maybe be the best shooter in a game.”

Self praised the coaching Clemence has received throughout his prep career, calling him “very well drilled,” and saying that he sees him being able to play a number of different roles for the Jayhawks during his KU career.

“I anticipate him coming in and being able to play multiple positions on the perimeter and if we decide to go really small he would be a nightmare-type matchup for 5 men,” Self said. “He’s got a chance to be an impact player that we will be counting on for sure.”

It remains to be seen if Self will add to KU's 2021 recruiting class, which currently ranks 34th according to Rivals' team rankings.

Future decisions by KU seniors Marcus Garrett and Mitch Lightfoot, as well as the NCAA's decision on how to handle roster limits in the wake of the extra year of eligibility granted to all winter sports athletes because of the COVID-19 pandemic likely will play a role in whether Self adds another player or two or wraps up the class with Adams and Clemence.

Self said recently that the extended recruiting dead period, which has kept coaches from going on the road and prospects from visiting campus, has not hurt the program's efforts.

“I kind of like it,” he said of the virtual visits and world of Zoom-call recruiting. “I like the fact that you can get in front of families and (talk) face to face and have it be more than a phone call. I don't miss recruiting at all, but I miss the opportunity for families and kids to come to our campus.”

“This day has been great so far,” Clemence said. “Everything has happened just how I wanted it to.”@BIGZTEXAS pic.twitter.com/RnnLf8SDyd

None by Jacob Polacheck

Welcome to KU Zach! Its great to have big men that can play in and out and shoot the 3. I will say this, start adding strength. KU needs a big hatchet man that can rebound and block shots.. Skinny and tall is great until you have to play against some big bull starts pushing you around.

Where is the current KU roster?