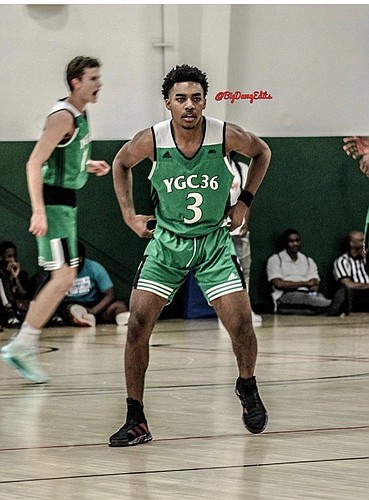 Limited by an ankle injury for the first couple of months of practice, Jossell first got on the court with his new teammates for an official practice on Nov. 4.

That delay no doubt added to an already steep learning curve for the KU newcomer. But KU coach Bill Self said Jossell actually looked pretty good on his first day.

From there, it was all about trusting the ankle again and trying to get back to full strength physically while still trying to absorb everything KU does offensively and defensively at the same time.

Overlooked by most big programs during his recruitment, the Jayhawks were drawn to Jossell because of his guard skills and competitive nature.

Both aspects of his game will serve the Keller (Texas) Central prospect, who originally hails from Chicago, well during his first season of college ball.

Here's a quick look at what to expect from the former three-star guard during the upcoming season.

He will: Be one of the better shooters on the roster

Every time I’ve heard Self talk about Jossell, the two things that come out of his mouth are how fast he is and how well he shoots it.

Jossell's teammates have validated that claim during the preseason, with some calling the freshman guard the best shooter on the team to date.

Doing it in practice or at open-gym sessions is one thing. Doing it for the Jayhawks in an actual game is another. And it remains to be seen whether Jossell will get that opportunity this season or not.

KU's backcourt is extremely deep with size and talent, and, as things stand today, it's hard to envision Jossell getting many minutes during Year 1 with the Jayhawks.

While that's obviously the goal of any player who comes to KU, you can bet that Jossell's ability to scorch the nets on the scout team will go a long way toward preparing KU's starters and rotation players ahead of game nights.

He won’t: Be discouraged by a lack of playing time during his first season at KU

By all accounts, Jossell is absolutely loving being at Kansas and developing a bond with his new teammates and coaches.

Unlike other prospects, who come to KU with sterling resumes and sure-fire NBA futures, Jossell came to KU for the long haul. And he's going to soak up every part of it that he can from start to finish.

Jossell will have a valuable role with this year's team, whether he plays or doesn't. At the very least, he'll be a key part of the red scout team in practices and will be in charge of putting pressure on KU's starters as an attacking point guard, a long-range shooter and a pesky defender.

KU lore is full of stories of players on the red team having a blast competing against future NBA lottery picks in practice. And Jossell, who has been practicing for the past 10 days or so, should take to that role right away.

It's awfully bold right now to project or predict that Jossell will follow in the footsteps of Frank Mason III or Devonte' Graham, the national player of the year in 2017 and one of the stories of the NBA regular season in 2019-20.

But there are similarities to how they got their starts.

Like the two former KU All-Americans, Jossell was largely overlooked by big college programs throughout his prep days, despite being a four-year starter on a good team.

His first Division I offer didn't come until Kansas extended it, and, there's a story in the Dallas Morning News that recalls the time that KU coach Bill Self, on a visit to see Jossell, tossed him a ball on the spot and asked him to shoot it from where he was, backpack hanging from his back and all.

Jossell did. The shot swished. And the offer came soon thereafter.

That might not be quite the same thing as finding Mason in a back gym at a Las Vegas AAU event or discovering Graham after a year at prep school. But Jossell's story is rooted in that same rags-to-riches mentality.

He'll have to find the riches. And there's a ton of work to do before he gets there. But those who know him insist that hard work is never anything Jossell has struggled with or shied away from.