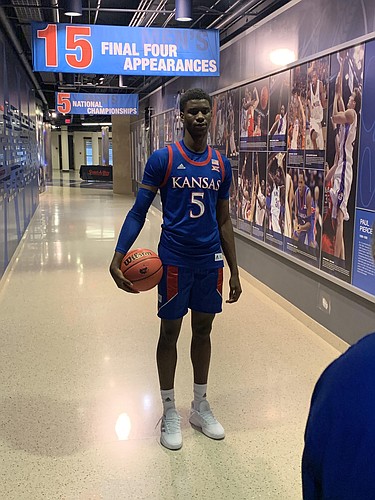 Kansas basketball coach Bill Self has led a lot of talented players and seen some pretty remarkable individual performances during his time on the sidelines.

But the one he saw from junior college transfer Tyon Grant-Foster during practice might rival any of them.

“Yesterday, he got on a roll that we haven't had anybody get on maybe in years,” Self said of Grant-Foster's hot streak during Wednesday's practice.

And there was nothing tricky about the “roll” that made it stand out.

“He just scored the ball,” Self said. “(He) makes hard shots, gets real baskets. He did some things that, without going into too much detail, we haven't had somebody that could go get their own (shot) like he can when he's good in a long time.”

The disclaimer in that last sentence — “when he's good” — was a key part of Self's evaluation of the talented 6-foot-7 wing upon whom Self has heaped plenty of praise on in the past, as well.

Because, for every one of those wow moments and eye-opening practice that he's had, Self said Grant-Foster also has flashed the potential to deliver “the polar opposite” of those hot stretches at any given moment, as well.

“We've just got to figure out good Tyon and certainly get him to be more consistent,” Self said.

Because of the newcomer's propensity to hit both ends of the spectrum, Self said he currently stands among a group of four players vying for the chance to be KU's fifth starter.

Returners Marcus Garrett, Ochai Agbaji, David McCormack and Christian Braun have separated themselves from the rest of the pack and, at this point, are virtual locks to be in the starting lineup on Nov. 26, when No. 6 Kansas opens the season against No. 1 Gonzaga in Fort Myers, Fla.

But Grant-Foster, Bryce Thompson, Jalen Wilson and Tristan Enaruna all have delivered days where they looked like they belonged next to that foursome. But none of them have carried that over from practice to practice in the kind of consistent manner Self and his coaching staff are looking for.

“I don't think there's been enough separation to really say who's ahead right now,” Self said.

So the KU coaching staff will use the next two weeks to dissect and evaluate things a little more and they'll make a decision closer to Thanksgiving.

Regardless of where Grant-Foster lands in that audition, his teammates say that he has the potential to be “special” this season and they're counting on him to help the offense regardless of what role he plays.

“I've played with a lot of really good players here,” fifth-year senior Mitch Lightfoot said on Thursday. “And that scoring is kind of different.”

Lightfoot said Grant-Foster has a “super change of pace” element to his offensive game that makes him hard to check and keeps defenders off balance.

“You can think he's getting ready to shot fake and go by you or do something like that and he can rise up and knock down shots,” Lightfoot said. “I mean, he can rise up at any point in time and you won't be ready for it.”

Walk-on guard Chris Teahan, who, like Lightfoot, has seen his share of talented players come through Kansas in the past four years, said Grant-Foster's game was unlike anything he had seen at Kansas.

“He's just like a lanky athlete who can get his shot off no matter what,” Teahan said Thursday. “He'll have two people draped all over him and all of a sudden he'll step back and rise up and you'll be like, 'No way he hits that shot,' and it'll go in. It almost seems like the more contested his shots are the better they are.”

Yeah, that's ma boy!! He will start, even if he doesn't, he will be our go-to guy who can create his own score.. This guy has a lot of tools. Josh + Wiggs, a shorter version. Giddy up!

This article make him sound a lot like Keith Langford or Kenny Gregory. That would be awesome!