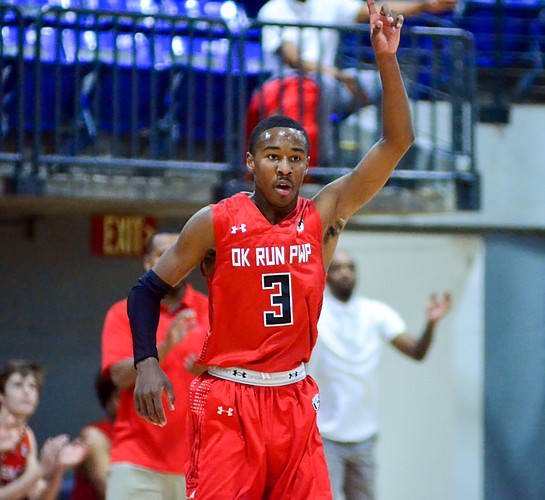 The possibilities are endless for KU freshman Bryce Thompson, both this season and during his entire Kansas career.

The potential exists for Thompson to become a star right away, flashing a natural scoring ability and next-level defensive skills because of his advanced feel for the game.

Of course, he also could fit in just fine as a role player of sorts for the 2020-21 Jayhawks, waiting patiently to drop his breakout season a year or two down the road.

Or the 6-foot-5 combo guard could land somewhere in between those two outcomes, perhaps as a starter right away but third or fourth option behind KU’s more experienced players.

That everything’s-on-the-table potential is part of what makes Thompson’s addition to a deep and talented roster so appealing.

His five-star status is going to earn him plenty of attention from the media as well as opposing teams and fans. But Thompson is the kind of player and person who views himself as a zero star player at the moment.

Everything he did in the past got him to Kansas, but none of it matters now. And he understands that his future will be shaped by how well he performs and produces at the college level, not by how highly ranked he was as a high school standout.

Here’s a quick look at what to expect from the talented freshman in Chapter 1 of his next journey.

He will: Be every bit as good as advertised

Unlike some five-star prospects, who show up on their college campuses with huge hype, hoping to get by on the athleticism that allowed them to dominate throughout their high school careers, Thompson’s game is absolutely bust-proof.

He’s also getting better — and still growing — by the month and should be ready for whatever college basketball can throw at him in his first season with the Jayhawks.

The reason? Simple. It’s his IQ.

Thompson has lived and breathed basketball since he could walk and his understanding, appreciation and execution of the game are next level.

That does not necessarily mean that he’s a lock to go for 20-plus points most nights. Nor does it mean he’ll fill up the highlight reel game after game. But it does mean he almost always will make the right play, as his comprehension of when to pass, when to shoot, when to attack and when to be patient is far more advanced than what you’ll find in a typical freshman.

Because of that, it does not really matter whether Thompson starts or comes off the bench or if he’s asked to be a go-to guy or a complementary player. He’ll be out there. He’ll play meaningful minutes. And, more times than not, he’ll make the KU lineup better however it’s necessary for him to do it on that particular night or possession.

He won’t: Need or demand a high number of shots to be productive

Thompson’s skill set is so smooth and versatile that he can pretty much fit into any lineup at any time anywhere for the Jayhawks this season.

If KU coach Bill Self and company need him to shoot the ball and function as an aggressive offensive player, he can do it. If they need him to blend in, taking open shots and looking to make plays for others, he can do that, too.

Regardless of what role he plays — and it could change from week to week and even game to game — Thompson’s game will allow him to produce something of value regardless of how many shots he takes or points he scores.

Look back at the Late Night scrimmage as an example. Sure, it’s a small sample size. And, yeah, Thompson did not score a point. But he made a couple of plays that led to easy buckets for his teammates and those are the types of contributions that earn you playing time and the trust of the KU coaches.

Thompson will have plenty of nights where he puts up good scoring totals and gets hot. And the fans and coaches will love those.

But he also figures to have several of those “quiet nights” that require a review of the box score — and all of the assists, steals and rebounds he snagged — to see just how productive he was.

The coaches love those just as much. Maybe more.

He might: Be one of the best freshmen Self has ever had

Remember a couple of years ago when Self called former Jayhawk Quentin Grimes “as complete a guard as we’ve ever had?”

Maybe the KU coach was just a couple of years in handing out that assessment, because it’s entirely possible that Thompson could wind up being that, too.

We all know how things worked out at Kansas for Grimes. But Thompson, to me, seems much more prepared for the role he figures to play in Year 1 with the Jayhawks — whatever that looks like.

This is not meant to be a knock on Grimes, who, through size and skill, possessed all kinds of talent and occasionally flashed his sky-high potential while at Kansas.

But Grimes was asked to help carry a team and, as a freshman, he wasn’t quite ready for that. Thompson won’t be asked to do that this year and he’d probably be fine with it even if he were.

Instead, he figures to fit nicely into a team loaded with veterans and young players and his versatility and all-around game should make it easy for Self to plug Thompson into the lineup in a variety of ways throughout the season.

Who knows how his numbers will look by season’s end — the guess here is that they’ll be impressive and rock solid across the board — but if things click for him right away, Thompson could have a chance to put up some of the best all-around numbers a KU freshman has had.