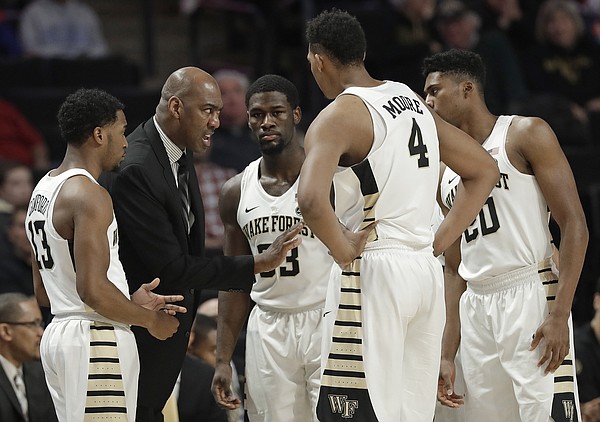 For the past few weeks, former Kansas great Danny Manning has been linked to a handful of NBA assistant coaching gigs.

But Tuesday night, the landscape changed dramatically and Manning's name resurfaced at the college level.

With reports indicating that Wichita State and head coach Gregg Marshall are expected to part ways by the end of the week, Manning's name is one that has come up in conversations about who might replace Marshall.

The longtime WSU coach who led the Shockers to an average of 25 wins per season in 13 years in charge of the program appears to be headed out the door after reports of verbal and physical abuse from several former players and assistant coaches were brought to light in recent articles written by Stadium's Jeff Goodman and The Athletic's Dana O'Neil and C.J. Moore.

The program is in position to attract several quality replacements, and Manning could be one of them.

Chris Lilly, of KAKE TV in Wichita, tweeted on Wednesday morning that sources had told him that WSU had reached out to Manning about the job.

Whether Manning is interested or if those efforts to reach him were successful remains another question entirely. But it's worth noting given Manning's popularity in the Sunflower State and his ties to Kansas as both a legendary player and former Bill Self assistant.

Fired by Wake Forest in April after six years in charge of the Demon Deacons program, Manning, 54, has become a popular name in NBA circles as new coaches in new places look to fill out their coaching staffs.

Reports of interest in Manning from Oklahoma City, Indiana and New Orleans have surfaced in the past couple of weeks and there also has been talk of Manning joining the broadcasting ranks for the 2020-21 basketball season.

Whatever happens, it's clear that KU's all-time leading scorer and rebounder has no shortage of options just six months after being let go by Wake Forest.

Prior to his time with Wake, Manning was the head coach at Tulsa for two seasons after leaving Kansas following the Jayhawks' run to the 2012 national title game.

Manning was Self’s staff at Kansas for nine seasons. He helped lead the Jayhawks to the 2008 national championship, two Final Four appearances, five trips to the Elite Eight and eight Big 12 regular-season titles.

I hope that Danny passes on any offer made by Wichita State. That is a program on a steep dive.

I disagree. With the right coach, WSU is a very strong program, with a great fan base packing their arena regularly (pre-COVID), and they've been paying coach Marshall 3.5 million/year. With Danny's ties to Kansas, it could be a great landing spot for him. The current situation with that program is specific to the coach, not the program. How exactly are they "on a steep dive"?

Marshal has to be the best coach they’ve ever had but 8 players transfer out of the program in the last two seasons says a lot. That puts him in Bobby Knight territory.

And if Danny were to take over, would that change Bill's position on playing the Shockers?

Yeah, I would expect some friendly matches if Danny takes that job. Considering we're going to play Mizzou again, seems that scheduling WSU wouldn't be a big shocker.

I'm okay with that. Would rather play shockers than mizzou

the best coach WSU has ever had is Ralph Miller. WSU was a national power back in the 60s and 70s. How soon we forget. Dave Stallworth, Bryant, Carr,

ralph miller is the best coach WSU has ever had. WSU was a power in the late 60s early 70s, a final four, Dave Stallworth, Bryant, Carr and others. Marshall couldn't hold a candle for miller. and miller was a Phog tree kansas boy. Chanute. world class athlete in his own right. went on to iowa and oregon state. how soon we forget

Wichita State may be on a steep dive. I don't know. But if they are not, then this could be Manning's big break. Big risk, big reward. If he takes over at WSU and brings them back to national prominence and a perennial top 25 team and occasional top 10 team he could build something special paving the way for him to eventually be short list coach for the elite programs.

Or he could go be an NBA assistant coach and earn a good living for the rest of his coaching career but otherwise never be heard from again. I don't think that he needs that, so I suspect that he would take a head coaching job if it could open doors for him to be an elite level coach.

The Wake Forest experiment was a failure. He couldn't coach them up enough to compete with the powerhouses in the ACC. WSU is no sure thing either. There is no pipeline of 5 star athletes lining up to sign with WSU. But he doesn't need busloads of 5* athletes in order to win in the AAC. If he's got the chops to be highly effective at WSU then it won't be long before the big time ADs come calling. He doesn't need to maintain Gregg Marshall levels of winning. Mark Turgeon level success at WSU likely is the benchmark for the next coach. Unfortunately for them it's hard to replace your best coach ever. Especially considering the allegations aren't exactly going to make recruits want to sign.

I know it's wishful thinking, but how great would it be to have Danny back at KU working with the bigs again!?!?!? #neverstopdreaming