'Hawks in the NBA: Joel Embiid continuing to elevate his stardom in Philly 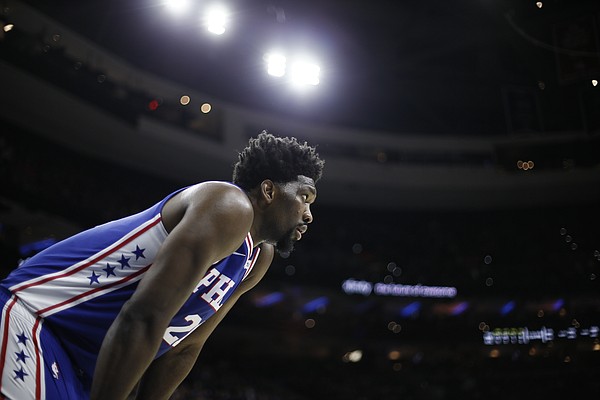 League officials continue to look at ways to resume play, but whether they’ll reach a point where the season is completed remains to be seen. In case it isn’t — or even if it is — it seemed like a good idea to spend some of this idle time looking back at the season that was for the former Kansas Jayhawks in the NBA.

First up: Who else? Joel Embiid, Philadelphia 76ers.

The Philadelphia 76ers superstar who missed his first two seasons of professional ball with injuries, missed 21 of the Sixers 65 games this season because of more minor injuries.

That didn’t keep him from being a monster when he was on the floor or from being the focal point of Philadelphia’s offense.

In his final game of the 2019-20 season to date, Embiid returned from a five-game absence because of a shoulder injury to drop 30 points, 14 rebounds and 3 assists in an easy home win over Detroit.

The life of the party at Wells Fargo Arena every time he’s in uniform — and even occasionally when he’s not — the man they call “The Process” took another step toward the dominance that many project for him in his professional career this season.

His points, rebounds and blocks were all down slightly compared to previous seasons. And his field goal percentage dipped, too. But he was better from 3-point range, better at the free throw line and did more on the offensive glass while also cutting down on his turnovers.

Those realities, along with the fact that his overall numbers stayed solid at 23.4 points and 11.8 rebounds per game, spoke to better efficiency and a more mature player.

There’s no telling how the rest of the season would have played out for Embiid. With 17 regular season games remaining, the Sixers were a lock for the No. 6 seed in the Eastern Conference playoffs and were just two games back of Miami for the No. 4 spot and home-court advantage in Round 1.

With Embiid back on the floor and ready for the stretch run, there were plenty of people, in Philly and beyond, who believed the 76ers would be a tough out in any postseason series because of their overall size, ability to defend and the advantage Embiid gives them on just about every team out there.

Philadelphia was 28-17 with Embiid in the lineup this season and just 11-9 without him.

Oh, and don’t think for a second that he or any of his teammates forgot about that tough, Game 7 loss to Kawhi Leonard and eventual champion Toronto in last year’s Eastern Conference semifinals.

That was the game, you might remember, where Leonard’s series-winning buzzer beater — over Embiid from the deep corner — bounced four times on the rim before falling through.

When Joel is healthy, the 76er's are really tough to beat. They whipped my MIL Bucks on Christmas Day. The 1-2 Punch of Ben Simmons and Joel are an opposing Coaches nightmare.

I am amazed how well Joel has developed his 3 point shot, but some analysts think he needs to post up more. No question he is the most talented ex-Jayhawk in the NBA.

We can only think "What If" Joel was healthy for his only NCAA Tournament, to supplement Andrew Wiggins. KU lost to Stanford in the 2nd Round (still hurts).