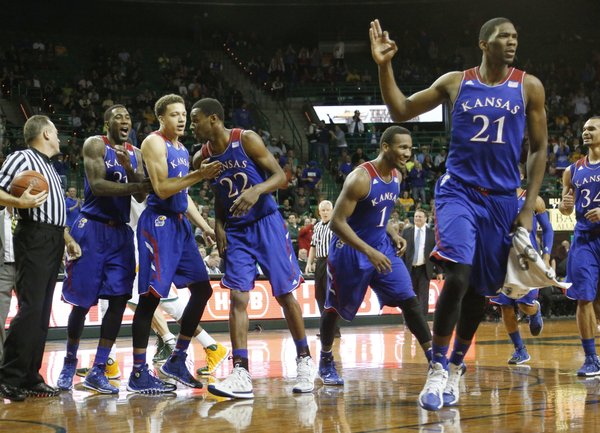 ESPN’s Jeff Borzello and John Gasaway recently put together a list of the top 25 recruiting classes in the 15-year one-and-done era of college basketball.

And while Duke and Kentucky dominated the list — combining to take the top seven spots and holding down 17 of the 25 spots overall — Kansas did make an appearance.

The one key caveat for the creation of the list is that it was formed based on recruiting rankings and projections when the players signed. It did not take into account the way the signees’ college careers actually played out.

That helps explain why the list included so many Duke and Kentucky classes and also leads one to believe that the number of Duke and Kentucky entries on a list of the best classes that panned out probably would have been half as long.

Kansas coach Bill Self has developed a reputation as an elite recruiter and gone head to head with, and won, several recruiting battles against the Blue Devils and Wildcats.

But in terms of a top-to-bottom class that was stacked with highly rated prospects at the outset of their college careers, none of Self’s classes in the last 15 years has been better than the 2013 class that included Andrew Wiggins, Joel Embiid, Wayne Selden Jr., Frank Mason, Conner Frankamp and Brannen Greene.

That group ranked ninth on ESPN’s list, one spot behind North Carolina’s 2006 class that broke the Duke/Kentucky stranglehold and featured three Top 10 prospects.

Adding strength to the class was the fact that the lone future Jayhawk not ranked in the top 50 that year was Frank Mason III, who went on to become national player of the year.

Mason’s stellar career was not factored into the rankings, but it’s also hard to ignore.

A big part of the reason Duke and Kentucky had so many classes on this list is the fact that both programs have committed so heavily to recruiting one-and-done talent.

Kansas has, too, to some degree, but not nearly to the same level as those two other blue blood programs led by John Calipari and Mike Krzyzewski.

Making one-and-dones a regular part of your program year in and year out increases the need for turning over large classes and bringing in more top-rated, one-and-done talent on a regular, oftentimes annual, basis.

During the 15 years considered for this list, KU has suited up nine true one-and-done prospects, 10 if you count Ben McLemore, who redshirted a year before leaving after his first season on the court.

They were: Xavier Henry, Josh Selby, Cliff Alexander, Kelly Oubre, Ben McLemore, Andrew Wiggins, Joel Embiid, Cheick Diallo, Josh Jackson and Billy Preston. Only about half of those guys turned out to be the home run, can’t-miss, game-changing prospects they were billed to be.

While the ESPN list was compiled using ESPN’s recruiting rankings, I figured it was worth looking at the other KU classes in the past 15 years that might have had an argument to be included.

The 2018 class (Devon Dotson, David McCormack, Quentin Grimes and Ochai Agbaji) was ranked No. 3 overall by Rivals.com and No. 5 by 247 Sports. But both Duke and Kentucky had classes ranked ahead of that crew.

Like the 2018 class, KU’s 2005 class, which featured Brandon Rush, Mario Chalmers, Julian Wright and Micah Downs, was ranked third overall by Rivals and 247 Sports and is among the best classes Self has signed at Kansas.

Although that group sits just outside of the time frame considered for ESPN’s list, a case certainly could have been made for the 2005 class be included. But the absence of a single player in the Top 5 probably made it just as easy to leave off.

It would be interesting to rank the classes based on what the players produced during their career.

It certainly would. Hmmmm...