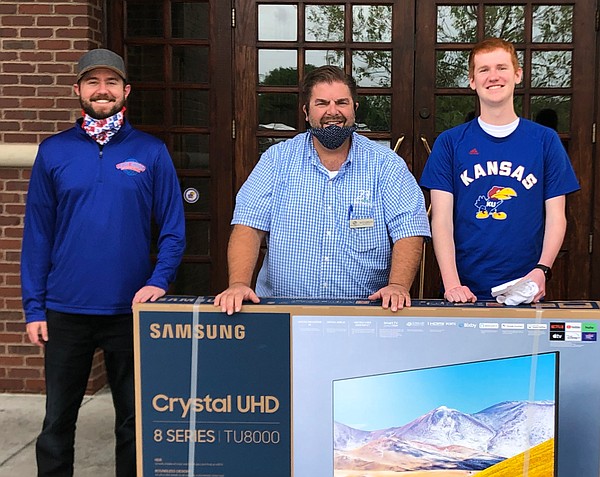 One round. Five measly questions.

That was all it took for “Rock Chalk Sports Talk” host Nick Schwerdt to completely change his opinion about which competitors had the best shot to win the recently wrapped, 64-person trivia bracket that played out on Schwerdt’s show on KLWN during the past six weeks.

And 20-year-old KU student Isaac Henderson was the man responsible for the change of heart.

“You can go back and listen to the audio,” Schwerdt said. “My only thought going in was that the older contestants were going to do better just because they had more knowledge of the pre-Bill Self era. But he stood out from the very beginning and there was no disadvantage to him being one of the younger guys in the field.”

Born and raised in Atchison, Henderson, the first official champion of RCST Trivia, had no real feel for how he would stack up in the trivia bracket. But competing sounded like fun, it helped take the edge off the absence of sports because of the COVID-19 pandemic and he was confident that he knew his stuff.

“When I signed up, it was just with the mindset of let’s have a little bit of fun with it,” Henderson said. “I just wanted to win one. I didn’t want to go out in the first round.”

It almost happened. It took Henderson five questions to advance to Round 2, a battle that Schwerdt said was one of the longest of the entire tournament.

“I would’ve put myself up against anyone going in,” Henderson said. “But I felt a lot more confident after that.”

The format for the RCST Trivia tourney was simple: Two competitors, live on the air and both on phone lines, squared off against each other in a sudden-death setting.

In all, Schwerdt said he and RCST co-host Derek Johnson came up with between 500 and 600 questions, ranging in difficulty from the easier, Level 1 challenges all the way to Level 5 status.

Most of the questions were KU basketball related, and all of them fell under the college basketball and Big 12 Conference umbrella.

“It was a lot of sifting through old KU media guides and a lot of time on basketballreference.com,” Schwerdt said. “Derek did the lion’s share of the work in coming up with the questions, and I give him a ton of credit for that because that was the least fun part.”

Game day was the most fun. And like all good competitions, the RCST Trivia throw-down had a little bit of everything, from matchups that came down to the wire to forfeits, fictional betting odds and bracket breakdowns.

“There were cheating accusations, people complaining that their questions were harder than others; we had it all,” Schwerdt said.

And Henderson had all the answers.

After correctly answering all five of his questions in his opening-round win, the KU junior missed just one the rest of the way.

That hiccup came in the Sweet 16, when Schwerdt asked which former KU player, with a minimum of one attempt, led the Jayhawks in 3-point shooting during the 2015-16 season?

Contestants were given 10 seconds to answer and, with the clock winding down and the wording of the question throwing him off, Henderson guessed Devonte’ Graham.

The answer was Brannen Greene.

“I was disappointed, too,” Henderson said. “Because he was one of my favorite players. I loved how he shot it and how he was also a little cocky and confident.”

The miss set the stage for the eventual champ’s elimination, and Henderson said he thought he was done when he heard the next question.

Who led Kansas in rebounding during the 2015-16 season?

“I knew it was Landen Lucas,” Henderson said. “So I figured I was going home. But he answered Perry Ellis and I stayed alive.”

As for the hardest questions he faced, Henderson said those were the ones that had answers he had only come across once or twice in his life.

In Round 1, he was asked which former Oklahoma basketball player joined Paul Pierce as the only other two-time MVP of the Big 12 Tournament. The answer was point guard Hollis Price.

And in the Sweet 16, he was asked to name the player who transferred to Kansas from William & Mary but never actually played a game. That was Jack Whitman in 2017.

“Being able to pull those two out was huge,” Henderson said.

The final round, where Henderson defeated Tate Vobach who had yet to miss a question, went just two rounds and Henderson walked away with bragging rights, a brand-new 65-inch television and some gift cards from tournament sponsors.

A graduate of Maur Hill-Mount Academy prep school, Henderson played basketball, golf and baseball growing up, and had plenty of support during his trivia chase.

His dad set up a Facebook page for his friends and family to follow his charge to the title. And he said his phone “was blowing up” with texts and calls for more than an hour after his final-round victory.

“It was definitely the most important thing going on in my life the last month and a half,” Henderson joked. “It was a fun ride.”

So, too, has been his life as a Jayhawk.

Henderson began going to KU football games with his family at age 5 and lists Jon Cornish, Justin Thornton and Prinz Kande, along with Kerry Meier, as his favorite players.

His favorite former KU basketball player is Frank Mason III and his favorite KU team is the 2008 national title team, even though he is willing to admit that, as a second grader, he fell asleep during the title game against Memphis.

His Twitter profile, which now features the nickname “The Wunderkind,” given to him by Schwerdt during his pursuit of the RCST Trivia crown, also includes a picture of him and Bud Stallworth.

“There are a heck of a lot more people out there who know a ton about KU and college basketball than I realized,” Schwerdt said.

And that was only part of the fun, Schwerdt said. The biggest thrill came from seeing the popularity of the event grow each week and watching it turn into a real-life sports drama during a time when actual sports had ground to a halt.

“We came up with this on a whim because we had to,” Schwerdt said. “But it really was a silver lining to this whole deal. It gave us competition, it was fun, unique, interesting, and I think the interaction we got with the listeners was exactly what you want in sports radio.

“Bringing them on the air and giving them an opportunity to be a part of the show instead of just observing the show was just awesome.”

Henderson agreed and said the press conference before the final match, which featured real questions from a handful of KU beat writers, made the tournament seem like a real sporting event.

“It definitely kind of filled that void a little bit and was a lot of fun,” he said. “I’m looking forward to trying to win it again next year.”

So did anyone break a sweat? Who was doing the rub-downs? Did they drink Gatorade or Red Bull? Inquiring minds want to know! Rock Chalk, Trivia Hawk!