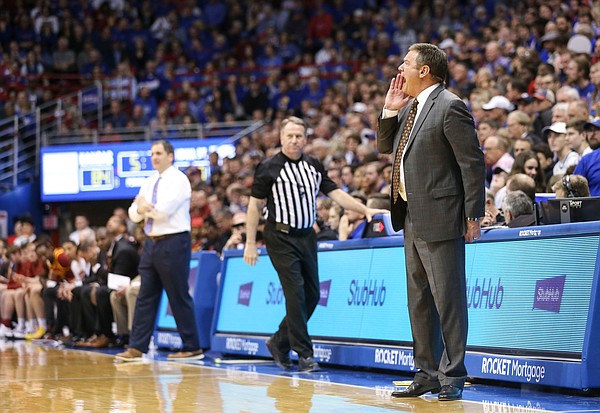 Kansas head coach Bill Self gets the attention of his players from the sideline during the second half on Monday, Feb. 17, 2020 at Allen Fieldhouse. by Nick Krug

Tuesday afternoon, the National Association of Basketball Coaches announced its recommendation that the current recruiting dead period for college basketball be extended through July 31.

With the recruiting scene already scheduled to remain quiet through May 31, extending it two more months would certainly change the landscape of what a normal summer recruiting schedule would look like for both college coaches and high school players.

Prospects are allowed to reach out to coaches as much as they like and phone calls, text messages, emails, Zoom calls and even virtual visits are all allowed.

But many of the bonds that lead to prospects signing on the dotted line are developed in living rooms, at workouts and simply by a head coach showing up to show some love to the players he’s recruiting.

Sunrise Christian Academy basketball coach Luke Barnwell is as qualified as anyone out there to talk to about the current state of college recruiting.

In addition to being able to offer up some quality insight on new Kansas commitment Zach Clemence, Barnwell has two other players on his 2020-21 SCA roster who Kansas is recruiting and a good feel for how the COVID-19 pandemic has impacted the way college coaches pursue players.

“It’s a lot of calls,” Barnwell told the Journal-World on Monday. “But in a good way.”

Several seniors-to-be on Barnwell’s roster — including Clemence — are being pursued at the highest level and with coaches not able to watch them compete this summer, the role of someone like Barnwell takes on even greater importance in the recruiting process.

Five-star small forward Kendall Brown (6-foot-7, 200 pounds) is the highest-rated senior-to-be on Barnwell’s current roster. Ranked No. 14 overall by Rivals.com in the 2021 class, the smooth and explosive wing is attracting interest from all over, including Kansas.

And while college coaches have seen Brown perform plenty of times in the past, finding out how he is progressing as he moves into his senior season is as much about keeping in touch with Barnwell as it is the kid and his family.

Class of 2022 prospect Gradey Dick is another Kansas target on Barnwell’s current roster.

A 6-6, 185-pound wing ranked No. 30 overall in his class, Dick recently announced his decision to transfer to Sunrise from Wichita Collegiate.

His presence, along with that of Brown and Clemence, figures to keep open the lines of communication between the coaches at Sunrise and KU.

Barnwell likes that and says he tries to help all of the college coaches who scout his players.

“I don’t feel like we oversell our guys,” he said. “We try to be honest and try to help them as much as we can. They’re all trying to do what they need to do. Figuring out a way to continue the process of building a program, this can’t stop that. They’ve got to figure out how to do it.”

Sunrise Christian. The name says it all.

When I picture Baby Jesus, I imagine him in a tuxedo tshirt, while also creating a basketball churn house in the name of the father.

. . .so states the jackwagon sipping his frappe’latte in his comfy surroundings, gazing down his long nose of pharisaical indignation

Sae - It really just means that we should fire Coach Self. Obviously it’s the NCAAs fault. {sarcasm}

Or in the words of CS Lewis - Well dome nephew Wormwood, or is it Soulsniper?

The high-profile schools have reputation to help them. This will hurt everyone, but if others are hurt more than you, it may become an advantage.