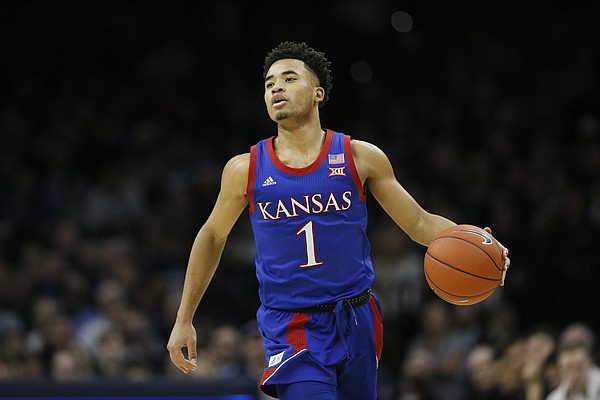 It is unlikely to impact the Kansas men’s basketball program, but the NCAA on Wednesday announced it was pushing back the date for college basketball players to withdraw from the NBA draft and still return to school.

The deadline for underclassmen who retained their college eligibility to pull their names from the NBA draft pool was scheduled for June 3.

A new deadline has not yet been set.

“Out of respect to the NBA’s process, the decision on a new withdrawal date will be made once the league has determined a timeline for the 2020 pre-draft process,” NCAA Senior Vice President of Basketball Dan Gavitt said in a statement.

Of the three Jayhawks departing from the 2019-20 Kansas roster, only sophomore point guard Devon Dotson could be impacted by this change. But ever since he announced his plans to turn pro in April, Dotson and his family have given every indication that the consensus second-team All-American plans to stay in the draft no matter what.

Seniors Udoka Azubuike and Isaiah Moss are out of eligibility, and all 13 of KU’s available scholarships for the 2020-21 season are spoken for heading into the offseason.

Gavitt said the decision to move the withdrawal date was made in response to the uncertainty surrounding the COVID-19 pandemic. The NBA’s recent announcement to postpone the NBA Draft Combine also factored in, Gavitt said.

It is the NCAA’s stated goal to “ensure that any change supports a player’s decision-making process related to professional opportunities while also protecting their academic pursuits and the opportunity to play college basketball.”

Dotson recently has received some high praise from draft analysts.

John Hollinger, who previously worked in the Memphis Grizzlies front office, wrote a piece for The Athletic in which he listed 20 players he would be willing to bet on to make a successful jump from college to the NBA.

“I’m higher on Dotson than the consensus,” Hollinger wrote. “The ability to blast off past defenders without a screen is hugely important for a guard, and Dotson has it. He’ll be able to get to the rim in NBA space. The questions are about the rest of the package. Will he ever be good enough to be a starter, or is he just a change of pace guy?”

Several mock drafts have Dotson slated to be picked in the late first round or early second. And one Eastern Conference scout recently confirmed that range to the Journal-World, saying he expected Dotson to be picked between picks 25 and 35 in this summer’s two-round, 60-pick draft.

The 2020 NBA draft is currently scheduled for June 25 in Brooklyn, N.Y.