Former Jayhawk Naadir Tharpe joins Philly-based TBT squad; Self Made not yet registered 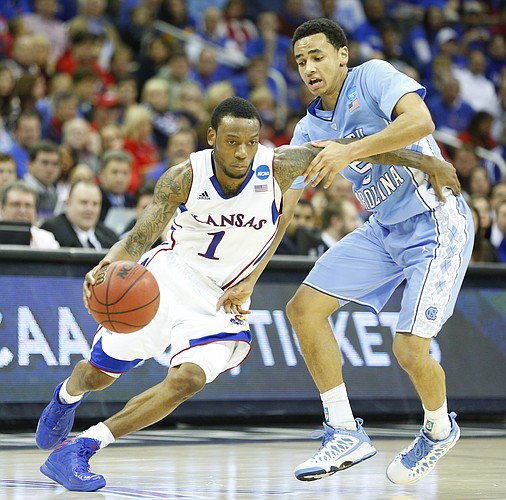 Kansas guard Naadir Tharpe is defended by North Carolina guard Marcus Paige during the second half, Sunday, March 24, 2013 at the Sprint Center in Kansas City, Mo. by Nick Krug

It remains to be seen if this year’s version of the 2-million-dollar hoops competition known as “The Basketball Tournament” is able to be played. But teams and tourney organizers are making preparations like the games will go on.

Tharpe, who has spent the past several years playing professionally in the G League and overseas, joins a roster that features former players from Temple, LaSalle and the University of Boston.

Last year, Tharpe was a late addition to KU’s “Self Made” squad.

Currently scheduled for late July and early August at eight regional sites throughout the country, the TBT’s 64-team bracket is scheduled to be revealed on June 22.

There is currently no entry for a "Self Made" squad listed on the TBT web site, but the team of KU alums, should they desire to participate, still has more than a month to make a push to be included in this year’s field if the tournament is played.

The application deadline for the 2020 tournament arrives June 15.

Back in March, TBT founder Jon Mugar released a statement expressing hope that the event will be played.

“We look forward to summertime, when we hope to be able to host a collection of teams, all across the country, for competitive, meaningful, championship basketball once again,” Mugar wrote. “Therefore, we opened our online team application process as planned. We hope you find some fun and respite in participating in the process or following along.”

Mugar added that event organizers would take necessary precautions and guidance to determine whether this year’s tournament can take place.

“We at TBT are committed to doing whatever we can to play our part,” Mugar said. “And will continue to pay close attention to CDC recommendations as they evolve.”

I've always kinda wondered what happened to this loser. He never really improved in the role he was expected to play, and I still resent that he went out partying with a topless woman after the 2014 Jayhawks, who had the talent to win a national championship, got stifled by a mediocre Stanford team in the Round of 32. Thankfully Kansas got a winner named Devonte Graham to take his place and get Kansas on the road to the 2018 Final Four!

Crazy to think that team had a future NBA all-star, the #1 overall pick, and a future consensus POY on its roster. And still busted out early.