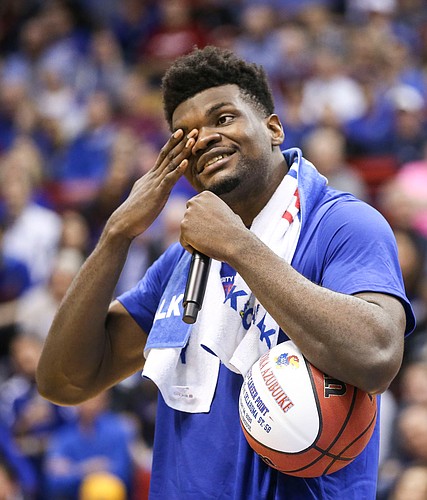 Another senior night has come and gone for the Kansas men's basketball program.

And, on Wednesday, current KU seniors Udoka Azubuike and Isaiah Moss both got their chance to say goodbye, following the top-ranked Jayhawks' 75-66 victory over TCU at Allen Fieldhouse.

The win — KU's 37th in a row in a home finale — guaranteed the Jayhawks (27-3 overall, 16-1 Big 12) at least a share of the 2019-20 Big 12 regular season title. And it allowed the senior speeches to be made with championship shirts and hats and a big trophy serving as the backdrop.

Moss, who came to Kansas this season after a career at Iowa, went first and was short and sweet with his thank yous and appreciation.

Azubuike, who visited KU as a 15-year-old from another country and leaves as one of the best big men in program history, went considerably longer than Moss, reaching double digits with his minute count and blowing past any over/under numbers that may have been set by those who predicted the length of his speech.

The whole time, as the two KU starters handled the microphone near midcourt, KU coach Bill Self and his coaching staff sat on the bench with smiles filling their faces.

"You know, it's great," Self said after the victory. "It never gets old to see guys have success. Now, if we hadn't have won the game, I don't think I would have enjoyed it as much. But it's always nice to end the season on a good note."

The 2018-19 season was the only time since 2005 that KU celebrated its senior night without a Big 12 trophy playing a starring role.

Here's a look at the complete speeches from Wednesday night from Azubuike and Moss. 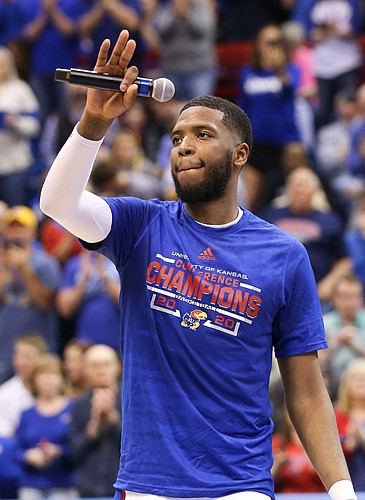 Kansas guard Isaiah Moss (4) waves to the fans during his senior speech, Wednesday, March 5, 2020 at Allen Fieldhouse. by Nick Krug

I know ESPN+ gets a bad rap but it allows me, a fan in NJ, to see the senior speeches, Late Night and the pre/post game shows. Doks typically a man of few words but had a lot more than a few during his speech. It was a nice surprise to see him let it go.