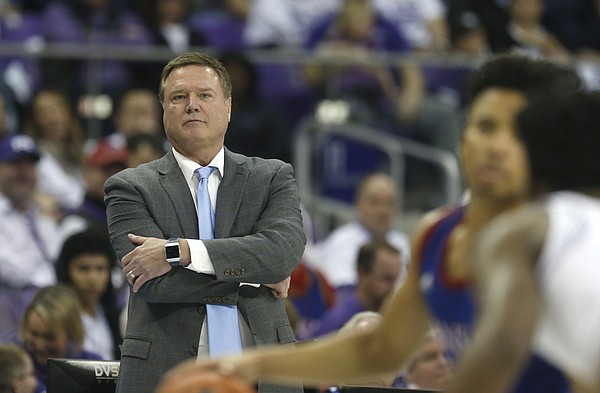 Kansas head coach Bill Self watches his team play against TCU during the second half of an NCAA college basketball game, Saturday, Feb. 8, 2020, in Fort Worth, Texas. Kansas won 60-46. (AP Photo/Ron Jenkins) by Associated Press

Talk about playing the upcoming NCAA Tournament without fans in the stands has started to heat up and the idea has several people connected to college basketball paying close attention.

Earlier this week, the National College Players Association sent out a statement urging the NCAA to consider whether hosting its signature college basketball event of the season with large crowds was putting the student-athletes in harm’s way.

“In the wake of the emerging coronavirus pandemic, the NCAA and its colleges should take precautions to protect college athletes. They should also make public which actions will be taken and when. Precautions should include cancelling all auxiliary events that put players in contact with crowds such as meet and greets and press events. Athletic programs should also take every possible measure to sanitize buses and airplanes used to transport players.”

“In regard to the NCAA’s March Madness Tournament and other athletic events, there should be a serious discussion about holding competitions without an audience present.”

“Google just cancelled a summit in California and Amazon is encouraging its employees to avoid all nonessential travel because of coronavirus concerns. The NCAA and its colleges must act now, there is no time to waste.”

Concerns over the coronavirus have spread throughout the world and Kansas basketball coach Bill Self said Tuesday that he had talked to his players about the virus.

To date, those suggestions have been the most popular advice on how to protect oneself from the spread of the virus, which, according to reports, now has topped 90,000 cases worldwide, with more than 3,000 fatalities.

According to the Associated Press, NCAA leaders have made tracking the virus a priority.

The AP reported this week that the NCAA had established an advisory panel of medical, public health and epidemiology experts to stay on top of the latest news and information about the virus known as COVID-19. NCAA Chief Medical Officer Dr. Brian Hainline will lead the group, the AP reported.

Hainline told The Associated Press that the advisory group would make recommendations on competition based on evolving medical protocols established by the Centers for Disease Control, the National Institutes of Health and state and local authorities

“We are in daily contact with the CDC and are advising leadership on the Association’s response to this outbreak,” Hainline told the AP.

NCAA Chief Operating Officer Donald Remy told Bloomberg News this week that college basketball’s governing body was in the process of creating as many contingency plans as necessary to be prepared. Bloomberg reported that 80% of the NCAA’s annual revenue comes from the NCAA Tournament.

“The NCAA is committed to conducting its championships and events in a safe and responsible manner,” Remy said in a statement. “Today we are planning to conduct our championships as planned; however, we are evaluating the COVID-19 situation daily and will make decisions accordingly.”

Leaving the decisions in the hands of NCAA officials and medical experts is the right move, according to Self.

“As far as the tournament, I'm not going to give that much thought,” he said. “It would be bad if (playing in empty arenas) happened, but if it happened it’s because it’s for the betterment of our world and our country. So you can’t argue with that. If it happens with the NCAA Tournament, it’s going to happen with Major League Baseball, it’s going to happen with the NBA Playoffs and NBA games. Certainly we don’t want that to be the case, but obviously the well being of everybody takes precedent over having people in the stands.”

Added KU senior Isaiah Moss of the idea of playing the biggest games of the season without fans in the stands: "That would be weird, just because it's different. It's never been like that."

The men’s NCAA Tournament is slated to begin March 17 in Dayton, Ohio, with the Final Four scheduled for April 4-6 in Atlanta.

The women’s NCAA Tournament, which will host its Final Four April 3-5 in New Orleans, begins March 20.

Bill Self still unsure of Udoka Azubuike’s status for senior night by KUsports.com