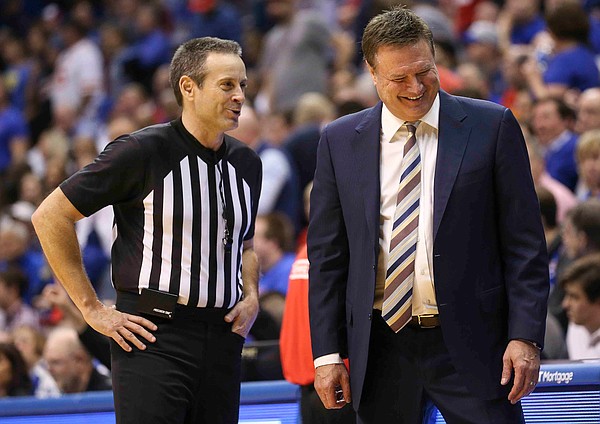 Kansas head coach Bill Self laughs with an official during the second half on Monday, Feb. 3, 2020 at Allen Fieldhouse. by Nick Krug

You probably cannot count on two hands the number of times you’ve heard somebody speculate, predict or even report that Kansas basketball coach Bill Self one day will be the head coach of the San Antonio Spurs.

Yet each time the topic has come up, Self, in some way or another, has made it a point to remind people that he has no plans to do that.

Still, the rumors persist. And they likely will until Self is either the coach of the Spurs or done coaching altogether.

Tuesday morning, Stadium’s Jeff Goodman had Self on his Insiders show and the two talked about the ever-present Self-to-the-Spurs rumors along with Self’s relationship with Spurs CEO R.C. Buford.

“I don’t hear about it much at all because I know that there’s absolutely zero truth to it,” Self told Goodman when asked if he had grown tired of hearing the rumors.

The connection between Self and Buford is as strong as it gets for two people not related by blood. Buford hosted Self on his visit to Oklahoma State when Self was a player and later helped him land a job on Larry Brown’s staff at Kansas as a graduate assistant.

The two longtime friends lived together for a year, were in each others’ weddings and have remained close friends throughout their professional careers.

Beyond that, Buford’s son, Chase, played for Self at Kansas and Self’s son, Tyler, currently works for Buford and the Spurs organization in operations, strategy and scouting.

But none of that, Self said, means the 17-year KU coach who currently has his team ranked No. 1 in the nation one day will work for Buford as the head coach of the Spurs.

“I think I know (Buford) pretty well,” Self told Goodman. “And I will promise you this has never been broached one time. Never even discussed at all. People may say whatever because we’re buddies, which we are. And (I’m) proud of that. But I’m not going to be the next coach of the San Antonio Spurs, nor would he want me to be. I mean, they’ve got arguably the greatest coach of all time (Gregg Popovich) that’s still got a lot of gas in the tank. So that’s a rumor that I know some people have said, but that’s a pretty ridiculous one right there.”

As ridiculous as it may be, you can bet it will continue to come up around the basketball rumor mill, no matter how many time Self says it shouldn't.

"I don't hear about it much at all, because I know there's absolutely zero truth to it."@KUHoops HC Bill Self shot down rumors linking him to the Spurs job with @GoodmanHoops & @RobDauster on #CHInsiders. #RockChalk pic.twitter.com/Hvzv4t7CrI

Great article Mr Tait.... Had a chance meeting with Mr Buford at a high school BB double-header in St Louis in the late 1990's or so...he sat down next to me. Although I recognized him (from the bench shot, post 1988 championship game), I simply introduced myself by first name and he did the same. What a treat! Very low key but truly a kind and generous individual... it was a fascinating evening. Perhaps my perception of Coach Self isn't accurate... but I take pride that he's the leader of this program. I believe he's both embraced and enhanced Kansas BB.

We can't predict what happens in the future. But if we need a new coach we'll get a good one. Pro coaching is not easy ask the former Michigan coach. So lets enjoy our present situation.

Coach Self has the benefit of having spent time with Coach Brown who has commented that his time here was the best and a mistake to leave.