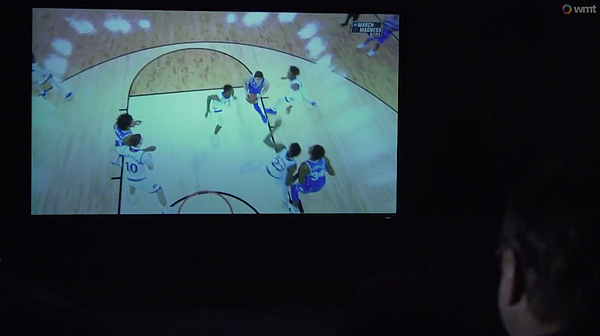 A still image from KU's new film-room feature, "Self Perspective" with head basketball coach Bill Self. by Matt Tait

Long after leaving Kansas following his senior season, former KU point guard Devonte’ Graham is still finding a way to rack up assists for the Jayhawks.

And his most recent dime went to his former head coach.

A week or so after Graham went viral by watching clips of past KU games and providing commentary on his shots, thoughts and the action in the video, Kansas coach Bill Self did the same thing.

“If you’re a little bored, as I am right now, (and) you’re looking for things to do, this is something we came up with (and we’ll be) watching some old game footage,” Self said in the opening seconds of Episode 1.

So look for more games and episodes in the future, with video breakdowns replacing Self’s live tweets from last weekend when CBS re-aired the 2008 national title game victory over Memphis.

Self’s setup — dubbed by KU as “Self Perspective” — is a little more formal and a lot less funny than Graham’s, but it still provides the same kind of insight and in-the-heart-of-the-action feel that Graham’s Instagram performance did.

Set up in the theater room at his house, Self walks Kansas fans through a 30-minute reflection on the Jayhawks’ 85-81, overtime win over Duke in the 2018 NCAA Tournament.

Complete with pauses, rewinds and watch-for-this moments, Self invites the viewer to get a small taste of what it’s like to watch film with the Jayhawks.

Granted there is no scouting report or game prep involved here, but Self does provide enough X’s and O’s to make you feel like there is.

It might not fully replace the Elite Eight games we could be watching right now, but it’s basketball. And it’s better than nothing.

Beyond that, it’s a pretty cool look behind the curtain at the way Self and the Jayhawks operate and how the action unfolds out on the floor.

According to a report from Zags beat writer Jim Meehan of The Spokesman-Review in Spokane, Wash., Gonzaga and Kansas are close to finalizing a deal for a future home-and-home series.

Meehan reported that the series is expected to begin in December 2022 at Allen Fieldhouse and would continue the following December at Gonzaga’s McCarthey Athletic Center.

A source close to the KU program told the Journal-World on Sunday that the two schools had been discussing a series but that nothing had been finalized.

KU leads the all-time series with Gonzaga, 1-0. The lone meeting between the two perennial contenders came on Nov. 13, 1998, when the Jayhawks knocked off the Zags, 80-66, at Allen Fieldhouse. Gonzaga led that game at halftime and went on to reach the Elite Eight later that season.

KU and Gonzaga finished the 2019-20 rankings at the top of most major polls, with Kansas at No. 1 and Gonzaga at No. 2 in the final Associated Press and USA Today coaches polls. Gonzaga wound up on top in the NET rankings, with KU just behind at No. 2.

Kansas State guard Cartier Diarra announced late last week that he had entered the transfer portal and would not return to K-State for his senior season.

The 6-foot-4 guard from Florence, S.C., started 58 of the 95 games he appeared in during his three seasons in Manhattan. In his announcement about entering the portal, Diarra said he was seeking a fresh start.

“Shaka’s our coach,” Texas Athletic Director Chris Del Conte told the Austin American-Statesman. “Nothing’s changed. We won five of the last six down the stretch, finished third in the conference. We have a good team coming back. Nothing’s changed on my end.”

Just watched the full 30:58. That was awesome! I am just a person who enjoys the games and tries to understand some of the techniques but overall don't have a clue. Watching HCBS's explanations was awesome.

No doubt. It's very well done and Self's comments are interesting for any fan but especially the die-hards.

Even this seems like it's just touching the iceberg of knowledge. It's why I shake my head in amazement when Joe Potato criticizes him or even one of the players that doesn't learn everything within the first month or 2, or even the first season or 2. So much more than we have any clue about.

Is it still possible to watch th 2008 championship game with Self's commentary? Didn't watch it a couple of days ago when it came out and now can't find it anywhere. Really missing watching a real game--and haven't seen that one since it was played. Would be such fun to watch again, knowing that we were going to win. : ) And to hear what Bill had to say as well would be fantastic! Thanks!!

Found the link. It was attached to Matt's article on March 23 "What is KU had been down only 2 points before Mario's Miracle?". Unfortunately, the video of the game is no longer available--marked private.

Is there any way it could be made available again--maybe even the night that the championship game would have been played if it hadn't been cancelled? Thanks!

Thanks, Matt, for the link. That was fun.

Loved it. This would be so great to have Self do after every game.

Guessing Coach Self has little time for this even in the "off-season" on a normal year, though you are absolutely correct about loving it.

What an enjoyable video. I love Self's analysis and his side comments. Please do more of these!!!

Interesting difference between the first open look that Svi had and the last one that he made. The first one was catch and shoot from well beyond even NBA range. Miss. The 2nd one he rhythm dribbled to the line and made it. Interesting to not hear coach comment on it. Then again he does comment elsewhere about players earning some freedom.

It reminds me of the Regional Championship game against the kitties in '88. We were taking deep shot after deep shot and missing them. Coach Brown subbed out (?Gueldner?) and inserted (?Scooter Barry?) who promptly and repeatedly took the shot from a step or 2 closer and made them. Changed the complexion of the game and season. Maybe even the programs.

We move on to #4/2, more FF's and NC, 2 of the winningest coaches, and they go thru how much emptiness on their way to Bruce. To their credit, they do have 1 conference championship and a video of some relatively random game