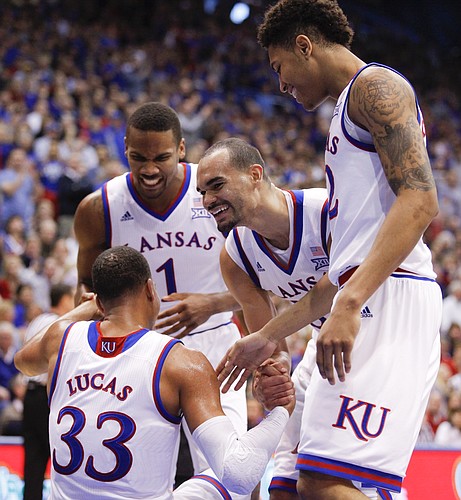 Call it Dayton, Ohio, and KU’s version of the First Four games that usher in a new NCAA Tournament each and every year.

Welcome to the play-in game of “Self Madness 2020,” where the No. 16 and No. 17 seeds in the bracket of the 17 years of Self’s teams will face off for the right to join the full, 16-team bracket on Wednesday.

In case you missed it, here’s a look at the idea behind “Self Madness” along with a look at where this thing is headed. In short, you, our readers, will spend the next couple of weeks determining which of Self’s 17 teams since arriving in Lawrence have been the best.

Seeding and the way the bracket sets up will make for some tough decisions and likely will leave some teams disappointed. But, hey, that’s March, right?

Be sure to check back often right here in this blog and on Twitter (@Kusports) for results and links to the voting.

We’ll leave the play-in vote open for the next two days and will move forward with Self’s Sweet 16 on Wednesday.

Without further ado, let’s get to the first matchup:

Here’s a look at the teams followed by a quick breakdown of the matchup.

Vote for your pick in the poll below and, when you vote in the full bracket starting Thursday, be sure to register to win the $500 cash prize from Truity Credit Union when you do.

A young KU team with no seniors in its rotation and only two juniors — Perry Ellis and Jamari Traylor — the Jayhawks still managed to win the Big 12 outright and secure a No. 2 seed in the Big Dance. Perhaps the fact that KU lost three of its last six regular season games, and dropped another in the Big 12 title game to Iowa State — making Kansas 5-4 in its nine most recent games entering the NCAA Tournament — should have warned many that this March run wouldn’t last long. After handling No. 15 seed New Mexico State in the first round, the Jayhawks had a Sunflower State struggle in Omaha, Neb., versus No. 7 seed Wichita State. KU freshman Kelly Oubre Jr. didn’t have any answers for the Shockers, and the killer WSU duo of Fred VanVleet and Ron Baker helped send the Jayhawks back to Lawrence.

Off-the-court issues plagued the KU roster throughout a forgettable 2018-19 season. KU withheld forward Silvio De Sousa from competition while awaiting the NCAA’s decision on his eligibility, and by early February the backup big man was officially out for the year. That blow came roughly a month after Udoka Azubuike suffered a season-ending injury one game into Big 12 play. Amid all of that, senior guard Lagerald Vick left the team for good less than a week into February. KU’s Big 12 title streak finally came to an end as the Jayhawks finished third. As a No. 4 seed sent out to Salt Lake City, Utah, KU beat Northeastern before Auburn boatraced the Jayhawks en route to two wins in Kansas City, Mo., and a Final Four berth. 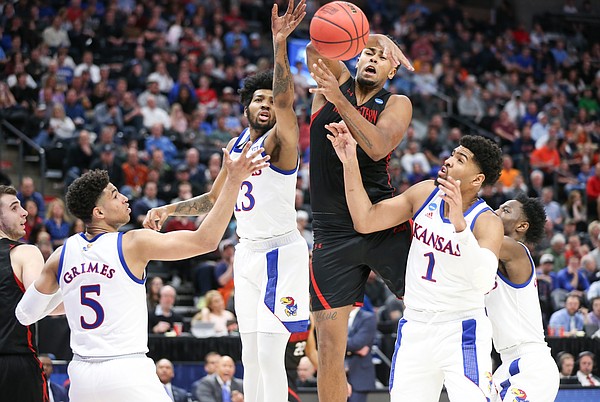 Both these are out in the first round anyway but I can't vote for a team where Vick abandoned us and Grimes was, well, Grimes.