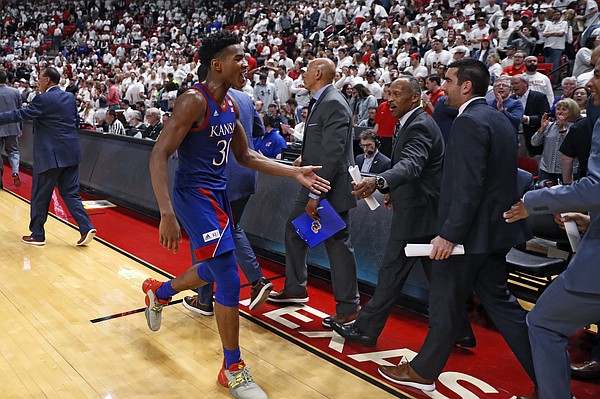 As most of you probably know, the top-ranked Kansas men’s basketball team ended the 2019-20 season on a 16-game winning streak, which is tied for the third longest stretch of consecutive victories in the Self era.

The Jayhawks did not get the chance to extend that streak by playing in this year’s postseason, but if you’re the type of person who likes to look for silver linings, the unfortunate end to the most recent season could put KU in better position to push that streak to the longest in the Self era.

That number currently sits at 20 and it came during KU’s 2007-08 national championship run, when the Jayhawks ripped off 20 straight wins to start the season before losing at Kansas State on Jan. 30, 2008.

This group of Jayhawks then, which will look decidedly different but still will be loaded when the 2020-21 season begins, will need five consecutive wins to push the streak to 21 games and slide into first place on that list.

We don’t know the full schedule for 2020-21 yet, but we do know that it’ll open with Kentucky on Nov. 10 in Chicago at the Champions Classic.

From there, it’s anybody’s guess as to what the next four games will be, but this year’s schedule featured Duke, UNC Greensboro, Monmouth, Chaminade and BYU.

KU won’t be playing in Maui next season, but the Jayhawks are slated to play in the Wooden Legacy Classic, from Nov. 26-28 against two of these three: Georgetown, UCLA and Virginia.

Whether those two games — or even just one of them — fall in KU’s first five games of the 2020-21 season remains to be seen when the nonconference schedule is released in the near future. But you can expect to see more teams like UNC Greensboro and Monmouth on the KU schedule between the Wooden event and the Champions Classic.

So the question becomes this: Which five-game stretch is tougher, what KU would’ve faced in the past couple of weeks or the one that awaits?

We’ll give the Jayhawks the win over Oklahoma State — although given their injury situation and the fact that they did not need to win a game in the Big 12 tourney, it’s not as automatic as it might seem — and the win over whatever 16 seed they would’ve faced. Sorry, Virginia.

Outside of that, though, you’re looking at three incredibly tough games to extend the streak to 21 in a row.

The first, most likely, would’ve been against a Texas Tech team that Bill Self said, as recently as March 7, could’ve won either game against the Jayhawks.

After that, if the bracket held, would’ve been a matchup with a top five Baylor team that not only did beat Kansas but also had the sour taste of losing to KU at home in its mouths. Oh, and that one, if it had happened, would’ve been banged-up KU’s third game in three days and come with the added intensity of having another Big 12 trophy on the line.

And then there’s the second-round game in the NCAA Tournament. There’s no doubt that the Jayhawks would’ve been favored no matter who they faced. But let’s look back at KU’s seven second-round games as a No. 1 seed under Self to see just how tough that second game can be, with the pressure of a trip to the Sweet 16 weighing heavily.

2010 – The No. 1 overall seeded Jayhawks were Farokhmaneshed by Northern Iowa in Oklahoma City, 69-67.

2011 – The Jayhawks knocked off a scrappy 9th-seeded Illinois squad, 73-59, behind a strong second half in one of their easier Round 2 wins as a 1 seed under Self.

2016 – Kansas climbed all over 9th-seeded UConn in the first half of this one, building a 23-point lead at one point. However, midway through the second half, the Huskies put some game pressure on Kansas, trimming the KU lead to 9 points before Wayne Selden Jr. put the game on ice.

2017 – Remembered by many as the game when Frank Mason III got right in the chest of MSU star Miles Bridges when tensions got hot, the Spartans made this one an absolute dogfight for 30-plus minutes before Kansas ran away with a 90-70 win in the final quarter.

2018 – Playing with Udoka Azubuike at less than 100%, the Jayhawks did all they could to handle Seton Hall bruiser Angel Delgado and survived with an 83-79 win in Wichita.

The Jayhawks are 6-1 in those seven Round 2 games as 1 seeds, but, as you can see from the list above, that game is rarely easy and anything but a gimme.

According to ESPN Bracketologist Joe Lunardi’s final seeding predictions — the NCAA elected not to put out a bracket this year since the tournament was canceled — the eight teams seeded No. 8 and No. 9 in this year’s bracket would have been Houston, Saint Mary’s, LSU, Colorado, Rutgers, Florida, USC and Oklahoma.

While those aren’t all powerhouse programs like Kentucky, Michigan State, UConn and North Carolina, they’re not exactly easy outs either.

It only means something if things like streaks matter to you, but the point is this: Regardless of what KU’s 2020-21 schedule looks like in November, it’s hard to imagine the first five games being any tougher than the five games KU would’ve had to win this month to push its overall winning streak to 21 games, the longest in the Self era.

Longest Kansas winning streaks under Self

I like our chances next year with the hunger from this year unsatisfied, the group we will have next year and Marcus leading the way. Peer leadership seems to be the difference between regular season and postseason success. That’s also why this group missing the chance to finish the season is so disappointing.