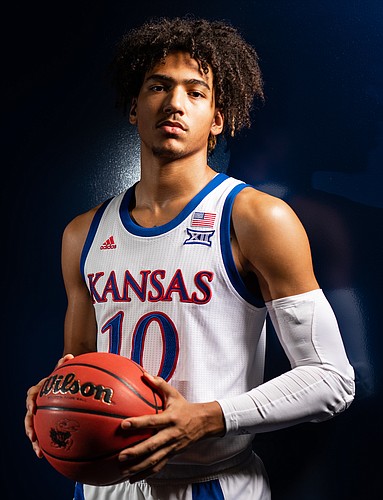 The end of any Kansas basketball season brings with it questions about the immediate futures of a handful of Jayhawks.

Despite the odd ending, the aftermath of the 2019-20 season is no different.

While seniors Udoka Azubuike and Isaiah Moss are done, a couple of underclassmen could have decisions to make. According to his mother, however, freshman wing Jalen Wilson is not one of them.

“Jalen loves KU and will definitely be back,” Lisa Wilson told the Journal-World on Friday, noting that concerns from KU fans on Twitter about her son's future at Kansas were off the mark.

Wilson, who initially signed with Michigan and then changed his path to Kansas after former Michigan coach John Beilein left for the NBA, was the No. 47-ranked player in the 2019 class per Rivals.com. That put him as the highest-ranked player in KU's freshman class this season and had plenty of people expecting him to be one of KU's breakout players this season.

However, after breaking his left ankle in the opening minutes of KU's second game of the season, the four-star wing forward from Denton, Texas, never got the opportunity to show what he could do for the Jayhawks this season.

“Sitting on that bench, not being able to go in, was one of the hardest things he’s ever been through,” Lisa Wilson said. “However, I’m grateful for that experience because while watching he was learning and learning at this level under Bill Self is the key.”

There was talk, throughout the latter part of his rehab, about Wilson returning in time to make an impact this season. But just when his ankle was rounding into shape, back spasms created yet another setback and Wilson and the KU coaching staff made the decision to shut it down.

He continued to practice, warm up and travel with the team, but was unable to play beyond the first two games of the season. He played 2:08 in the loss to Duke and missed his only shot while committing one turnover. And he was on the floor for just 27 seconds in KU’s home win over UNC Greensboro.

Prior to that, he played a combined 40 minutes in KU’s two exhibition victories, shooting 3 of 13 from the floor for 9 points.

Through it all, the 6-foot-8, 215-pound Wilson appeared to bond with his teammates and connect with KU’s coaches even though he was unable to help the team.

“Every since J was little, he’s always found the good in someone or made the best out of any situation,” Lisa Wilson said. “I’m so proud of his growth this year.”

Provided he is healthy, Wilson figures to factor prominently into KU’s outlook for the 2020-21 season.

As one of nine wings/guards likely to be on next year’s roster — Wilson, Marcus Garrett, Ochai Agbaji, Christian Braun, Tristan Enaruna, Dajuan Harris, Bryce Thompson, Tyon Grant-Foster and Latrell Jossell — Wilson’s versatility and ability to play either the 3 or the 4, depending on the lineup, opens up a number of ways he can contribute.

If Self and company elect to play primarily with four-guard lineups, as they have done in recent years and did for most of the second half of the 2019-20 season, that creates an even easier path to significant playing time for Wilson.

A really challenging season for a young man. The team looks strong for next year. They’ll need to treat the conference as their March Madness because there hasn’t been an adult in the room for quite awhile. But the kids will pay the price.

It would be a great time for this staff to resign and to give us a chance to bring in our next staff. Chances of that happening? About as good as a hustle chart winning a National Title and Cuomo Martin going to the Final Four...with a team...that is actually playing. In the Final Four.

I am really looking forward to watching Jalen Wilson and several others next season!

I agree that both Udoka and Isaiah Moss are gone. One for the money, the other for the show.

But interestingly, they might not have to be. I'm hearing that the NCAA is going to provide "eligibility relief" for players because of the truncated season. Keep your eye on that topic.

But yes...Udoka is gone. It's interesting because he doesn't even project as a first-rounder. Would returning help his draft stock at all? The question of guaranteed money lurks. Dedric Lawson hurt himself, despite the large cacophony of voices saying he should have left.

Don't get me wrong, this is just an analysis. But Dok WILL leave. It's the way of things anymore....

You mean he’d leave after four years of college? That’s the way of things?

Did you expect him to apply to Law School and become a team manager?

Evidently you haven't seen what the NCAA is discussing for eligibility relief.

And in Dok's case, a lot of his "four years" he's had saw him play 11 games as a freshman, missed the conference tourney as a sophomore, played 9 games his junior year, and had his senior season shortened.

That's NOT a typical "four years". Besides, if your draft stock can be improved and get you to the point where you can earn guaranteed money, that should be a consideration. The question is where Udoka stands now versus where he would project next year given whose on the landscape coming into college.

Here's where it might get confusing for guys like you. It may be more financially profitable to wait a year before entering if you can position yourself to reach the threshold of guaranteed money. And if the NCAA is going to provide eligibility relief, it's a real possibility. Watch ESPN and you'll hear more crazy thoughts such as this...in college basketball.

It may have already been agreed to in principle, so you'll have to catch the information train running.

I've heard this before in many different scenarios. Always uncertain the future is.

Is that you, Yoda?

OMG, did anyone look at Joe Lunardi’s bracket. Kentucky, Duke, Wisconsin, and Auburn. Even Arizona State at a 10 seed is a team who’s had our number as of late.

Dok did a lot to improve his marketability this year. Lots of talk about him being trimmer though still massive. Among the best feet on the team translating into the ability to defend on the perimeter, which is crucial even if he’s not going to shoot from there. Really adapted his game as teams threw everything at stopping him without a significant reliable 3pt threat. Even his FTs were better though miles to go still. I’m not sure what more he accomplishes with another year though he definitely could petition for one due to the shortened previous seasons even before the redefining of March Madness.

Agree. This is like a sell moment in the stock market. With his history of injuries, he shouldn't risk another 10-game season. We may not have a post-season to play for in 2021. His value and options will not increase.

Lots of perimeter options. Will be interesting to see who develops a 3 pt shot and learns to defend. The keys to getting on the court.

Now hard to predict what might be happening. But to say no way for Doke to return if eligible might be misleading. Presently it appears he has 2nd round potential. First round is guaranteed. He needs to be able to score away from under the goal and dunk. Opinions question whether G league would be better than college competition. Surely Doke will consider what is best for him. Now he doesn't have the opportunity to return next year.