'Hawks in the NBA: Graham enjoys breakout season in Charlotte 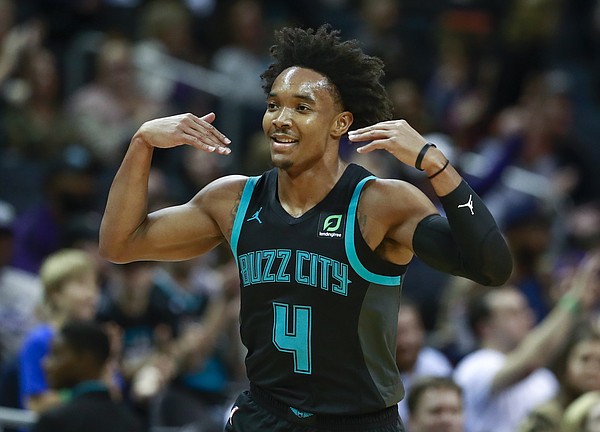 Charlotte Hornets guard Devonte' Graham gestures after making a 3-point basket during the second half of an NBA basketball game against the Orlando Magic on Monday, Dec. 31, 2018, in Charlotte, N.C. The Hornets won 125-100. (AP Photo/Jason E. Miczek)

League officials last Thursday announced the approval of the NBA’s plan to restart play in early July, leaving 22 teams still alive in the 2020 title chase. While we wait for July to arrive, it seemed like a good idea to spend some of this idle time looking back at the season that was for the former Kansas Jayhawks in the NBA.

Next up: Devonte’ Graham, Charlotte Hornets.

Even if you’re not an NBA fan and don’t care about the professional league, you likely heard about the kind of season former KU point guard Devonte' Graham was having in Charlotte.

In short, he became a bona fide breakout star with the Hornets and was one of the top 3-point shooters in the entire league. Beyond that, he delivered plenty of moments that showed that he can carve out a role as a regular contributor and clutch performer.

Big scoring nights. Buzzer-beaters to win the game. Assists to open teammates after attacking off the dribble. Like he did at Kansas during his stellar senior season, Graham did a little bit of everything for the Hornets this season.

The former KU All-American and Big 12 Player of the Year looked every bit like his old Kansas self this season, pulling up for jumpers with extreme confidence, shaking defenders with his handles and playing an aggressive, attacking style whenever the ball was in his hands.

At one point, he was one of just six players in the entire league averaging 20 points and 7.5 assists per game. The other five? Damian Lillard, LeBron James, James Harden, Luka Doncic and Trae Young.

That milestone came after Graham became just the fourth player in NBA history to have 50 3-point makes and 100 assists in the first 15 games of the season. The three others on that list were Steph Curry, James Harden and Baron Davis.

Graham’s breakout performance came after Charlotte watched All-Star Kemba Walker leave for Boston in free agency. In an attempt to replace Walker, the Hornets signed former Celtics guard Terry Rozier to a three-year, $58 million contract last offseason. But Rozier has yielded point guard duties to Graham about half the time, and the two have proved they also can play well together for the Hornets, who were 23-42 at the time play stopped and in 10th place in the East, seven games out of the final playoff spot.

He averaged nearly four 3-point makes per game on 37.3% shooting from behind the arc, and he hit 82% of his free throw attempts.

After Graham played in 46 games during his rookie season — with three starts — his big second year brought his career NBA averages to 12.5 points and 5.4 assists per game.

That’s a pretty good return on a second-round pick, and it put Graham firmly in the running for the NBA's Most Improved Player award for the 2019-20 season.

Graham had a great season and cracked the Top 3 KU players in the NBA! I sure hope he wins the MIP Award.

It is interesting that Michael Jordan recently lectured the Hornets on improving their leadership skills! The Hornets simply lack sufficient player depth and talent.

Jordan has now been the majority owner of the Hornets for 10 years. He is arguably the greatest NBA player of all time, but he has failed in rebuilding the Hornets.