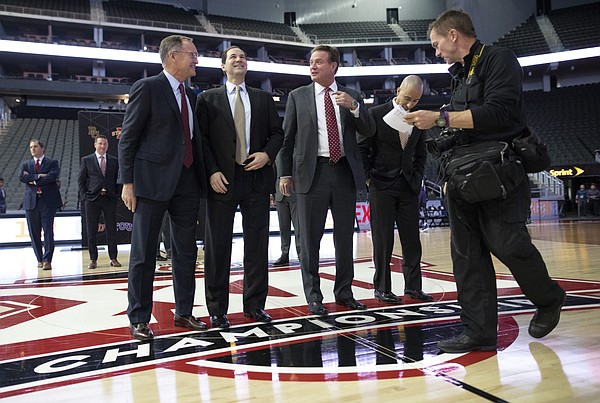 Kansas basketball coach Bill Self joined the nine other Big 12 men's basketball coaches in putting together a short video aimed at inspiring change in racial injustices in the United States.

Self had three speaking parts during the video that featured all 10 coaches reading lines of a unified message.

"It's time for a change," four of the coaches repeated, including Self, along with Baylor's Scott Drew, Texas' Shaka Smart and Oklahoma State's Mike Boynton.

"It's time for us to use our platform to make a difference," Oklahoma coach Lon Kruger said at one point during the video.

The video spoke specifically about the death of George Floyd in Minneapolis that sparked protests throughout the country during the past week, and also about impacting peoples' lives in a positive way and coming together to inspire change.

Self spoke specifically about being "part of the conversation to help create solutions."

"We all need to take a stand," Self said in the video.

The video is merely one of the latest ways that college and professional coaches, teams and athletes have shared their emotions, thoughts and hopes for affecting change in the world.

Several KU coaches, including Self, also posted their own personal statements on Twitter. The most recent to do so was KU volleyball coach, Ray Bechard, who posted the following tweet on Tuesday.

"Having a hard time deciding what to get me for my birthday," Bechard wrote. "Here’s an idea. How about we all promote a more compassionate country, one that frees itself of racial injustice and values the lives of all it’s citizens. Recruit a friend to do the same! #birthdayboywantschange!"