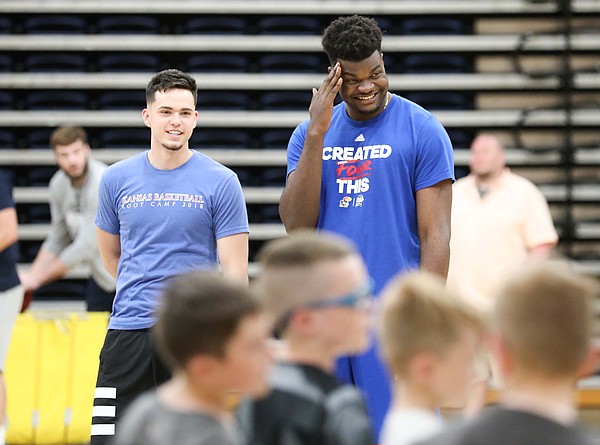 Kansas center Udoka Azubuike and Elijah Elliott have a laugh as they watch over the campers during a Washburn University basketball camp on Tuesday, June 4, 2019 at Lee Arena in Topeka. by Nick Krug

Kansas coach Bill Self told the Journal-World on Friday evening that guard Elijah Elliott, a walk-on from Southlake, Texas, has entered the transfer portal.

Self said the 6-foot-3 combo guard who was a redshirt freshman during the 2019-20 season, “hasn’t made a decision (about his future) to my knowledge.”

Elliott joined the Jayhawks as an invited walk-on prior to the 2018-19 season after a strong prep career in Texas.

He suffered an injury midway through his first season and redshirted before returning to action last season.

Elliott appeared in nine games during the Jayhawks’ 28-3 season in 2019-20, making three of four field goal attempts in 22 total minutes.

Elliott was expected to be one of three walk-ons on the Kansas roster during the 2020-21 season, joining senior Chris Teahan and sophomore Michael Jankovich.

Good Luck Elijah. I hope you land somewhere that you can start and have a good college career to look back on.

Can't blame him for wanting to get playing time. Sorry it didn't work out for him at Kansas but wish him the best and hope he does well.

Are you kidding me? can't blame him for wanting to get playing time? so why even try? This is Kansas not KSU. You are going to have to go against the very best. Playing time will have to be 100% earned...whether you are a one and one or a walk on.

What the ???? How in heavens name can you attack Dale Rogers for such a benign statement or is your anger aimed at Elijah? The kid walked on at KU, he will always have that as a memory but he is a basketball player and he wants to play more so he is transferring to a place where he can play. There is absolutely no reason to shout "Are you kidding me?" No, no one is kidding you. Now take a chill pill and go back to you "new" normal life where a teenager's decision on basketball isn't the most important issue ever.

Does the transfer portal open them up for any division? Can D1 transfer to D2 or D3, or vice versa? I've never seen that mentioned that I recall.

Not to be a smartass but if you walk on wouldn't you just walk off?

So you're tellin' me there's a chance...

Why was Bill Self encouraging a walk on? Did he win any of his city league championships with walk ons as leaders?

Seriously, what is the point of all this?

Any walkon that gets to be with one of the best programs in the country and a hall of fame coach for 2 years has already had it workout for him. It’s great that kids like Elijah get opportunities like this. Can’t blame him for checking out options with all the uncertainty going on.

Scott - My understanding is that it opens them to being contacted/recruited by other coaches without it being a violation for the coach. They always have been able to choose to go to other schools regardless of division. This just opens communication.

i don't know what's worse - getting to the point where you are forced to ask the ugly fat girl for a date or being dumped by her? this was a lose - lose situation for kasnas.

This is a non-sequitur for KU basketball. It will neither help nor hurt KU basketball. KU was not "forced" to allow Elijah to walk-on. He choose to and Bill allowed him to give it a try. It was obvious from watching him play, he was not top of the D1 level type of player. Unlike the "ugly fat girl", your analogy falls flat. We will address your beauty and fat shaming at another time.

What is better is having the self-confidence and wherewithal to relate to everyone with dignity and grace regardless of social, economic, intellectual, race, religion, ..., or athletic ability.