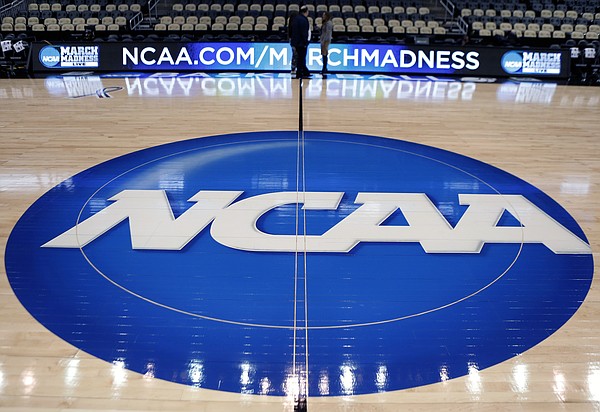 In this March 18, 2015, AP file photo, the NCAA logo is displayed at center court at The Consol Energy Center in Pittsburgh. by Matt Tait

NCAA President Mark Emmert visited with The Athletic’s Seth Davis this week to discuss the outlook for fall and winter sports in 2020.

Like many administrators trying to monitor the pandemic and plan for the upcoming seasons, Emmert made it clear that the key piece of information driving all of the NCAA’s decisions is the safety and well-being of the student-athletes along with common sense.

“You have to assume that there will be student-athletes and students in general who come down with the virus,” Emmert told Davis in an exclusive interview. “So the real question isn’t, what do you do if someone comes down with a case? It’s, what do you do when they do?”

School, conference and NCAA officials across the country, in conjunction with health care officials and experts, are asking that very question and putting guidelines, policies and procedures in place to act accordingly when that happens.

With football being the first major NCAA sport up on the 2020-21 college sports calendar, a lot of those efforts have been put toward preparing for the football season, which, at KU, is now just 73 days away from opening day.

Emmert, like many decision-makers, is confident there will be college football this fall. He called the situation “very, very fluid” and added that, “whatever occurs, it’s going to be different.”

Whether that means no fans, stringent testing, changes to the schedules and travel procedures or all of the above, it seems as if pretty much everyone associated with the sport has accepted the fact that a different type of season is coming our way.

College basketball, however, is a slightly different animal. For one, it’s played indoors. For two, it begins in the fall and extends into the second semester, which puts the sport and its athletes and coaches in a much different position than football.

Emmert addressed the 2020-21 hoops season in his recent sit-down with Davis, expressing that the NCAA was looking at a bunch of different scenarios for how best to plan and prepare for a college basketball season this year.

But at the same time, the KU coach said that there were still a lot of unknowns and that the season, if it’s played, would likely look different from seasons past in a lot of meaningful ways.

While some have wondered if moving the season back to a January start and playing through May instead of starting in November and ending in March would be the best move, Emmert offered a different approach.

“One possibility, for example, and it’s just a possibility, is to do the opposite,” Emmert said. “To move the season forward, begin it earlier in November, play some games, maybe even some conference games, before the Christmas holidays in anticipation that there may be some significant disruptions.”

The thinking behind that theory is, the earlier you start the more time you give yourself to manage athletes testing positive for COVID-19 along the way.

“Basketball’s a much more intimate game in the sense that you only have 13 scholarship players,” Emmert said. “If one or two student-athletes come down with it, then you’re probably quarantining a whole team. So you may have to say, ‘Look, we’re going to stop playing for two weeks.’

“If you had started the season earlier and you’ve shortened the number of contests, you can afford to have some disruptions in the season and still get a full season in.”

No one knows for sure what will happen in either sport. And Emmert emphasized that most of the major decisions made in all sports will be left in the hands of school and conference officials, with the NCAA there simply to provide guidance.

The best approach as of today is for school officials, coaches and athletes to remain vigilant and to continue to put together long lists of plans, contingencies and procedures so they’ll be ready for anything and everything that could possibly come their way.

It sounds like the powers that be at Kansas are doing just that and have been for weeks.

And those plans only figure to become more detailed and concrete as the seasons draw closer.