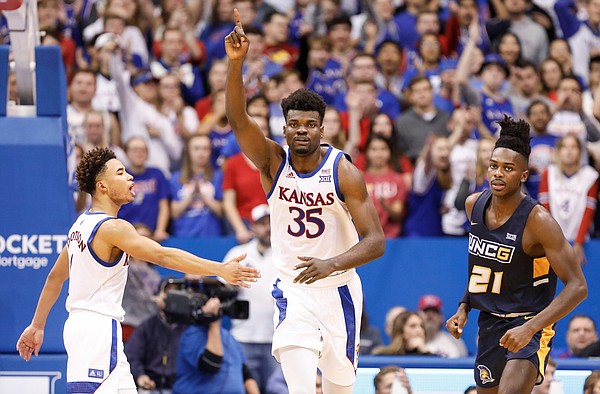 Toss Kansas basketball coach Bill Self into the camp of those who believe the absence of pre-draft workouts might actually help the two former Jayhawks eligible for this year’s NBA draft.

On a special edition of his “Hawk Talk” radio show on Tuesday night, Self said the fact that NBA scouts and general managers this year will have to rely more on college game film than in-person workouts could benefit both point guard Devon Dotson and center Udoka Azubuike.

The two KU All-Americans were among the best players in the country from start to finish during the 2019-20 season. And their consistency on both ends of the floor stood out throughout the season.

You’ve heard of top tier prospects from the past who have chosen to skip individual workouts to preserve their spot at the top of the draft board? Think of this as that but without Azubuike or Dotson choosing that route.

“So many times (teams) may get enamored by somebody you may not have seen as much, because they can wow you in one workout or something like (that),” Self said on Tuesday. “I really think when you can’t go workout for others, they’re going to rely on tape a lot. I think that helps both of their chances. I really do.”

Rather than viewing the odd schedule brought about by the pandemic as a negative, Self saw it as a positive for both players.

“If you’re a borderline first-round pick and you go to a workout and you shoot it bad, that may knock you out of being that with that particular team,” Self said. “There’s not going to be any of that (this year). Of course, you don’t get a chance to better yourself, but you certainly don’t get a chance to hurt yourself.”

Projected as fringe first-rounders who are all but assured of at least going early in the second round, Azubuike and Dotson both come with question marks.

For Dotson, it’s his lack of size and knock-down shooting ability that has scouts questioning how effective he can be at the NBA level. For Azubuike, it’s his status as a true center that has some putting a limit on how high he will be drafted and how big of a role he’ll have in the NBA.

But regardless of whether teams are interested in pulling the trigger on the two Jayhawks late in the first round or waiting until the second, Self said he liked both of their chances of making it.

“I think they both have a great chance to go first (round), but if they don’t, that doesn’t mean they haven’t made it,” Self said. “I mean, look at Devonte’ (Graham) and Svi (Mykhailiuk).”

Those two former Jayhawks were second round picks in the 2018 NBA draft and both found consistent roles with the Charlotte Hornets and Detroit Pistons during their second pro seasons.

“I do think that’s right there for them,” Self said of Dotson and Azubuike.

Originally scheduled for Thursday in Brooklyn, N.Y., the 2020 NBA draft has been moved to Oct. 16 because of the impact of the COVID-19 pandemic.