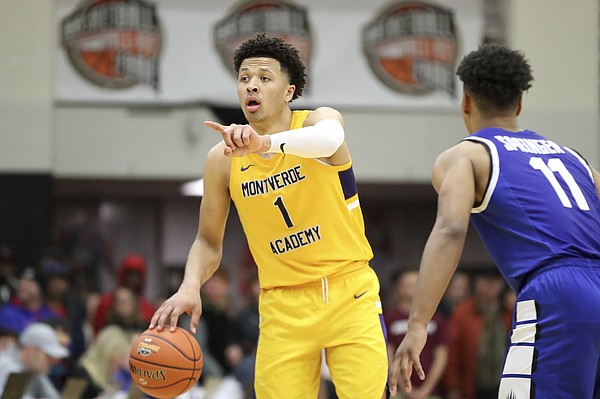 The Big 12 Conference picked up a big win on Monday, when five-star guard Cade Cunningham announced that he was staying at Oklahoma State instead of searching for somewhere else to play after the Cowboys were banned from the 2021 postseason.

“Loyalty,” Cunningham said in the video. “It’s more than a word. It’s action. It’s standing by the people you started with. It’s showing up, even when times are hard. It's believing in the people who always believed in you. It's a commitment. Now, more than ever, I’m loyal and true. I’m committed. Stillwater, let’s work.”

The 6-foot-7 point guard who recently won the Naismith High School Trophy, given annually to the nation’s best prep player, was the key piece of a highly ranked class at Oklahoma State.

His commitment hit a temporary snag when the Cowboys were hit with the postseason ban and numerous other penalties related to findings that former assistant coach Lamont Evans accepted up to $22,000 in bribes intended to help steer athletes to certain financial advisers.

Oklahoma State is appealing the ruling so the door is not completely closed on Cunningham playing in the NCAA Tournament. But regardless of the final ruling, he appears to be happy at Oklahoma State, where head coach Mike Boynton took steps toward getting the program back on track late last season.

Boynton, who last year hired Cunningham's brother, Cannen, as an assistant coach, has compared Cunningham’s possible impact to that of Oklahoma’s Trae Young during the 2017-18 season. As a freshman, Young led the nation in scoring and assists and lifted a team that struggled the previous season to the NCAA Tournament.

When the penalties were initially announced, Boynton said he wasn’t sure what Cunningham would do.

"At the end the of day, whatever his family and he decides is best for his future, I’m going to get right in tow with that and I’m going to support him 100%,” Boynton said.

In the end, Cunningham stuck it out and while his presence figures to have an impact on the Big 12 race during the 2020-21 season, it also will keep the spotlight shining bright on the conference that is so often carried by Kansas.

Is OSU also banned from the Big XII Tourney?

That is very refreshing to hear a young man with so many other options hold to his commitment. And who understands what loyalty means. My respect for this young man just shot up off the charts.

Loyalty would be staying all four years. Playing one season shows loyalty to the NBA Players Union rules.

The fact that his brother was hired as an assistant coach last year may also have something to do with his decision. ;)